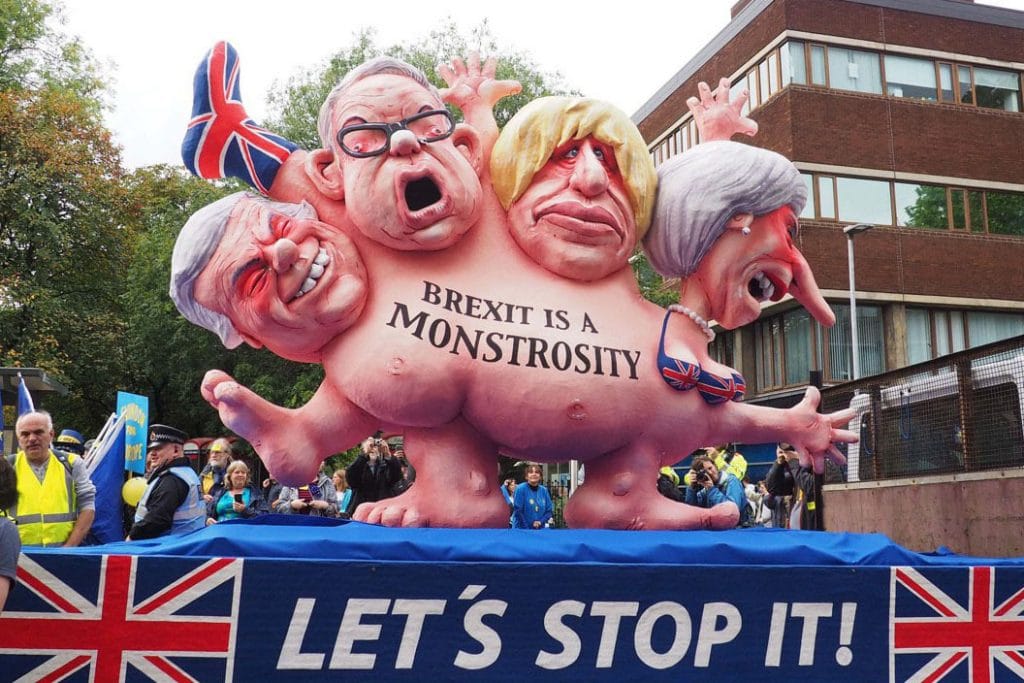 At the front of a demonstation against Brexit in Manchester a float showed a multi-headed chimera with the faces of Theresa May and three leading Brexit campaigners: Foreign Secretary Boris Johnson, Environment Secretary Michael Gove and Brexit Secretary David Davis. It beared the inscription “Brexit is a monstrosity” – “Let’s stop it”. The float was made by Jacques Tilly and his team. The photo was taken by Robert Mandel. CC BY 4.0, Link.

Five months before the March 29 leaving date, talks on how to avoid an acrimonious and chaotic exit of Britain from the European Union are on a knife-edge. A ‘hard’ Brexit would be a political and economic earthquake with global ramifications, but even if an agreement is reached the profound political crisis gripping Britain is set to deepen, as the ruling Conservative Party shatters into warring factions and the possibility grows of its replacement by a Labour Party government led by the avowedly socialist Jeremy Corbyn.

Most pundits expect a last-minute deal because this is what usually happens, but standing in the way is a uniquely intractable obstacle—the border between the Republic of Ireland and ‘Northern Ireland’, a part of Ireland that has remained under British occupation since this island was brutally divided in 1921 following Ireland’s war of independence. To understand why, some background discussion is needed.

What is the European Union? Why is it in crisis?

The European Union is an alliance of major and minor imperialist countries who have banded together to contain their own destructive rivalries and to strengthen their ability to compete against rival capitalists in North America and Japan. To this end, they have created a free trade zone without borders or tariffs, harmonised laws and regulations, adopted a common currency (which Britain and Denmark have refused to join), and have instituted free movement of labour within the EU’s borders. In the past two decades the EU has expanded to include Poland, Hungary and other former satellites of the now defunct Soviet Union, a prime motive for which is the desire of British, German, French etc. capitalists for access to their much cheaper workers, either through shifting their factories eastwards or encouraging the westward migration of their workers.

The EU revealed its true nature in its post-2008 bailout of private banks and the wealth of the super-rich, its brutal shafting of Greece, and its hostility to refugees from Syria and other countries torn apart by wars and economic crisis. This imperialist club is in a protracted death agony, being torn apart by internal rivalries which have resurfaced with a vengeance since the 2008 financial crisis. This crisis, currently in remission, is about to resume with full force thanks to bankrupt Italy, whose economy has not grown in two decades and whose government debt is conservatively estimated to be 133% of its GDP, one of the highest ratios in the world.

The demise of the EU is also foretold by the deepening crisis of traditional parties from one end of Europe to the other. Far-right demagogues are moving to fill the vacuum left by the accelerating collapse of the traditional social democratic and communist parties that have long dominated the leadership of the European working class. Their political bankruptcy is revealed by the fact that at no time since the onset of the global economic crisis in 2008 have European trade unions or socialist parties sought to organise so much as a single pan-European act of resistance against the austerity they all say they oppose; and they turned their backs on the people of Greece and on migrants and refugees fleeing wars and economic devastation resulting from decades and centuries of European colonialism and neocolonialism.

Why did Britain vote to leave?

A June 2016 referendum returned a 52%-48% majority in favour of leaving. Decisive in this shock outcome were several million workers who don’t usually vote but who seized on the referendum to register a protest against deteriorating social conditions and demonstrate their disenchantment with centre-left and centre-right mainstream politicians. That they chose the Brexit bandwagon to mount their protest, which is led by racists, anti-immigrant xenophobes and troglodyte politicians nostalgic for the British Empire, shows the susceptibility of many workers in this imperialist country to the demagogy of the far right. Another notable feature of the referendum result was the enormous chasm it revealed between generations—73% of voters under the age of 24 voted to remain in the EU, while 69% of voters over the age of 65 voted to leave. Millions of youth were amazed and disgusted to find how so many of their parents’ generation had swallowed the arguments of racist xenophobes, and there is widespread and continuing anger that their generation will have to bear the consequences of their elders’ stupidity.

So why is the Irish border such an intractable problem?

The current impasse in Brussels concerns arrangements for the Britain’s orderly departure from the EU; formal negotiations on the future relations between Britain and the EU have yet to begin. The British government demands untrammelled, friction-free trade with the EU, yet rejects the obligations and responsibilities which go with this. There is not the slightest chance that the EU will accept such an arrangement, yet senior British politicians managed to convince themselves otherwise—on the grounds that border controls and trade disruption would be damaging to EU member states as well as Britain, and that mutual self-interest makes a free trade relationship with the EU an attainable goal. Their biggest mistake was to enormously overestimate the importance of Britain to the EU; that the latter would be prepared to compromise its own fundamental laws and principles in order to accommodate Britain’s demands. What they never imagined in their worst nightmares was that the EU would give a higher priority to the interests of little Ireland, whose population is just 7% of Britain’s, than to the interests of Great Britain.

Anything short of frictionless trade between Britain and the EU means the introduction of custom checks and border controls. Once Britain leaves the EU, it is logical that the EU’s external border will run between Northern Ireland and the Irish Republic, causing inevitable and severe disruption to the economy of both parts of the island. Decades of civil strife between Northern Ireland’s Irish nationalist/Catholic minority and its pro-British/Protestant majority, and the undefeated armed struggle of militant Irish nationalists against the British Army, were finally brought to an end by the 1998 Good Friday Agreement. A key factor enabling this settlement was that both Ireland and Britain, as members of the EU, are subject to the EU’s European Court of Justice—the nationalist/Catholic population in Northern Ireland have very good reasons to distrust British law and British justice—and another key factor is that the border between the two parts of Ireland was rendered invisible by both nations’ membership of the EU customs union.

British politicians initially wanted the status of the Irish border to play no part in discussions about Britain’s orderly withdrawal and to be consigned to negotiations which have yet to begin over Britain’s future substantive relationship with the EU. In other words, they cynically wanted to use the threat of disruption to the Irish economy and reversal of the peace process as a lever to obtain a free trade agreement with the EU which would give Britain untrammelled access to the EU market without the obligations of EU membership. But the EU adamantly rejects this. They insist that an orderly, agreed exit of Britain from the EU must include a guarantee that a hard border will not be redrawn between the two parts of Ireland. This means that, in the (highly likely) event that a frictionless trade agreement cannot be struck, Northern Ireland must indefinitely remain part of the EU customs union and subject to EU law.

So, as things stand at the moment, if Britain wants to get out of Europe it must surrender part of its sovereignty over Northern Ireland—and not only this, since there must be a border between Britain and the EU, this border must be drawn between Britain and the whole of Ireland! An outrageous violation of Britain’s sovereignty, says the British government—but the division of Ireland was itself a crime against Irish sovereignty, the culmination of centuries of genocidal brutality! That this should now come back to torment Britain is magnificent, poetic justice!

On the other hand, if Britain crashes out of the EU without agreement, the EU will have no choice but to establish the hardest of land borders of between the two parts of Ireland, with potentially disastrous consequences for Ireland’s economy and political stability. Britain is using this threat to force the EU to agree to its demands. It is difficult to imagine a policy more likely to poison British-EU relations and British-Irish relations for decades to come.

To fully appreciate the exquisitely excruciating crisis which the British state has landed itself in, you also need to know that Irish nationalists/Catholics are now close to 50% of Northern Ireland’s population; that Northern Ireland voted by a clear majority to remain in the EU; that the full name of the Britain’s governing party is the Conservative and Unionist Party, indicating how important British imperialist domination over Ireland is to the ideology of the British ruling class; and, finally, that this party is only kept in power by Northern Ireland’s extremist, bigoted, and of course hard-line pro-Brexit Democratic Unionist Party.

Will Britain crash out of the EU? If not, which side will capitulate? Your guess is as good as mine! Watch this space for the next installment of this episode in the death of the old world order!