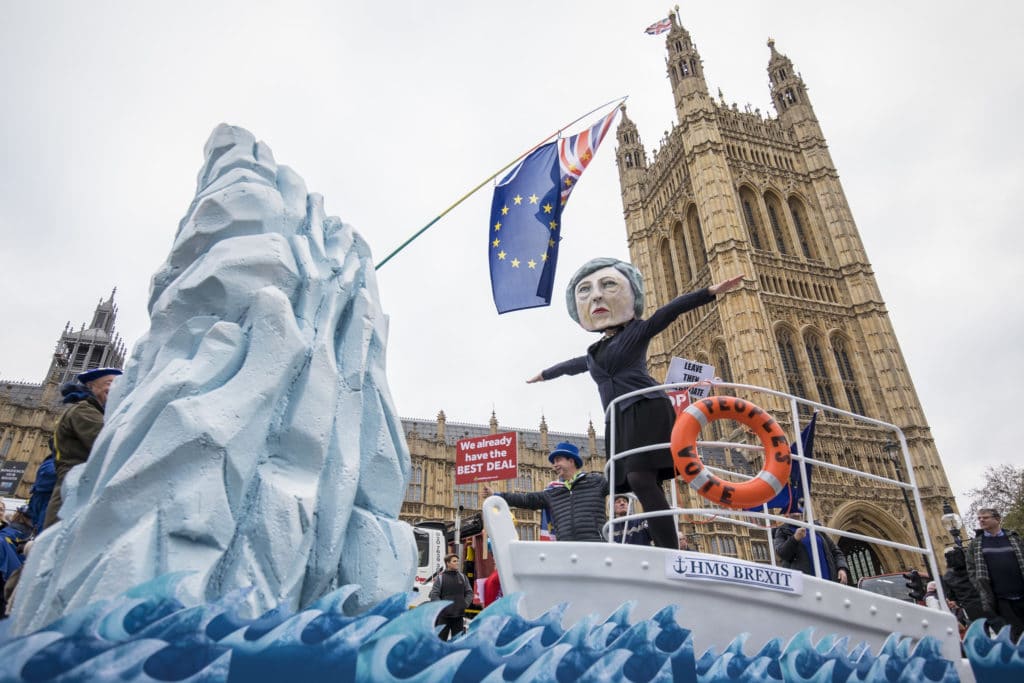 Theresa May “HMS Brexit” Stunt Theresa May steers HMS Brexit towards an iceberg outside parliament, with only a People’s Vote life ring to save her (January 15, 2019). Photo credit: Avaaz (Flickr).

This article was first published in Nuestra America XXI #31 (Spanish). The following is a translation provided by the author (with slight modifications).

“In capitalist society… democracy is curtailed, wretched, false, a democracy only for the rich, for the minority” – V.I. Lenin. Westminster, the so-called ‘Mother of Parliaments’, perfectly illustrates the truth of this. Parliament is paralysed because the ruling class is hopelessly divided. The result—an hilarious farce;the whole world is laughing, and slapping its forehead in astonishment. A toxic brew of humiliation, seething factionalism and panic incites politicians to increasingly irrational behaviour and fuels civil wars within the two functionally capitalist and imperialist parties that have dominated British politics for more than a century: the Conservative Party and the Labour Party.

This article briefly examines three aspects of the Brexit crisis: why it threatens to accelerate Britain’s decline; why it portends the demise of the ‘social contract’ that binds workers in Britain into an alliance with their imperialist rulers; why it hastens the reunification of Ireland and the breakup of Britain. Put these together, and it becomes clear that imperialist Britain truly does face an existential crisis.

Britain is a declining and increasingly decrepit imperialist power. The plutocrats that rule this country sit on a vast global empire of wealth accumulated from centuries of plunder. Their foreign direct investments are second-only in size to those owned by US capitalists. Relative to the size of its economy, Britain’s banking ‘industry’ is enormous. Matt Taibbi’s famous description of Goldman Sachs—“a great vampire squid wrapped around the face of humanity, relentlessly jamming its blood funnel into anything that smells like money”—is an even more appropriate description for the City of London.

Britain zealously hangs on to its seat on the UN Security Council and to its nuclear ‘deterrent’, yet the time has long passed since its navy ruled the waves and its industries ruled world markets. To protect their wealth and power, Britain’s ruling families need allies, as well as the continuing patriotic support of its citizens. They are deeply divided about how to achieve these objectives.

Their strategic dilemma is acute: should they throw in their lot with European imperialists, or should they count on their ‘special relationship’ with the USA? Both options are fraught with risk: the EU (European Union) is being torn apart by its own uncontainable contradictions, while the USA, Trump or no Trump, is guided not by sentiment but by ruthless pursuit of its own capitalists’ interests.

The Brexiters’ fantasy of a virile Britain freed from the straitjacket of EU regulations—many of which, e.g. those relating to working hours, health and safety, environmental protection etc, are designed to prevent capitalists in one member nation from unfairly competing with others—are crashing against harsh reality: Britain’s dependence on the European market compels it to maintain close alignment with the EU, whether or not it is formally a member. But if it is ceases to be a member of the EU, it will have no seat at the table where decisions are made. And if it isn’t sitting at the table, it will be on the menu.

The death of social democracy

How can Britain’s imperialist rulers maintain patriotic support in the face of growing working-class anger against austerity, growing poverty, and extreme levels of inequality? And this anger will only increase, because capitalist Britain’s chronic crisis means it can less and less afford the expensive concessions—free healthcare and education, social security—that purchased the docility of the working class and took radical change off the agenda. Should they attempt to continue as before, by concealing their vileness behind a veil of liberal, cosmopolitan values? Or should they practice at home what they have always perpetrated abroad—divide and rule, foment racism and xenophobia, and blame foreigners, Europeans and EU regulations for Britain’s problems?

This, in essence, is what the Brexit crisis is all about: two diametrically opposed strategies for the defence of the interests of Britain’s capitalists, both of them masquerading as the ‘national interest’.

The ruling Conservative Party’s long-running civil war over Europe prompted the June 2016 referendum on Britain’s membership of the EU. The result—52% voted to leave, on a 72% turnout—defied all predictions and defies simple analysis.

And it revealed a chasm between social classes. 59% of managers and professionals (Social Grades A&B, who make up 27% of the population) voted to remain in the EU; in contrast 62% of skilled workers (‘C2’, 21% of the population) and 64% of semiskilled, unskilled and unemployed workers (‘DE’, 23% of the population) voted to leave. Despite the large majority of workers who voted to leave the EU, only 35% of those who voted for the Labour Party in the 2015 general election voted to leave, compared to 61% of those who voted Conservative. This surprising discrepancy reflects how much the Labour Party has become a middle-class party that can no longer count on the support of wide sections of the working class—46% of the semi- and unskilled workers who voted in the 2015 general election cast their vote for the Conservative Party or the even more chauvinist UK Independence Party.

Hostility to immigration was the single-most important factor that induced a clear majority of workers and of over-50s to vote against EU membership. Among older voters, this hostility is primarily motivated by racism and nostalgia for Empire. Among workers, matters are more complicated. For many, especially those who don’t usually vote but who turned out in much larger numbers than expected, the referendum was an opportunity to cast a protest vote, to register their rage against the establishment, their sense of being abandoned, of being excluded from the social contract.

Experience of working and living alongside people of colour, as well as the latter’s enormous contribution to culture, science, sport, cuisine and so much else, has over recent decades substantially diminished racist prejudices amongst white workers, though these remain widespread. But the two vectors of capitalist globalisation—immigration and outsourcing—have greatly intensified the competitive pressures bearing down on semiskilled and unskilled workers, shrinking their wages and dramatically reducing their trade unions’ bargaining power. In the economic struggle—the struggle to protect and improve one’s position within the capitalist system as opposed to the political struggle to overthrow it—seeking protection from increased competition is a natural and normal reflex. But this does not make it progressive! 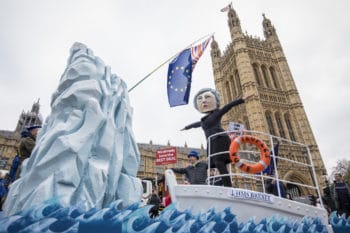 Theresa May “HMS Brexit” Stunt
Theresa May steers HMS Brexit towards an iceberg outside parliament, with only a People’s Vote life ring to save her (January 15, 2019). Photo credit: Avaaz (Flickr).

Free movement of labour between the EU’s 28 member states is one of the EU’s ‘four pillars’. Jeremy Corbyn and Theresa May are united in their opposition to it, each in their own way hoping to retain or regain working class support by pandering to its protectionist impulses. The principal difference between them is over Britain’s alignment with EU trade regulations. Corbyn advocates a customs union in order to minimise disruption to the millions of jobs that depend on trade with Europe, while May opposes this because it means Britain would be forced to accept EU rules and could not negotiate its own trade deals.

Should the Conservative government fall and it befalls Corbyn to negotiate a different deal with the EU, a rude shock awaits him: the EU is likely to demand free movement of labour in return for frictionless trade, and a customs union will not cover trade in services, which make up 80% of Britain’s economy and 40% of its trade with the EU.

Corbyn’s rise to the Labour leadership is itself an expression of the destabilisation of social democracy. Soldiers in the British Army’s elite Parachute Regiment were recently filmed using a life-size effigy of him for target practice, an accurate reflection of how he is seen by the entire political establishment. Decades of solidarity with national liberation movements around the world, and support for striking workers, resistance to austerity and privatisation at home—all of which he has pursued in defiance of past leaders of the Labour Party and of the large majority of its current MPs—has earned him the hatred of Britain’s rulers. Yet he stops well short of acknowledging the imperialist nature of the British economy and the British state—or the depth of its crisis. Once again he and his supporters will have to learn the hard way: capitalism cannot be reformed; the Parliamentary road to socialism is a mirage.

The breakup of Britain

Britain is made up of England, Scotland and Wales. Centuries ago, at the dawn of the age of empire-building, the ruling elites of these three nationalities buried their differences in order to colonise, enslave and plunder the rest of the world. Ireland was their first colony, and Northern Ireland remains their last.

Northern Ireland is not part of Britain, it is a part of Ireland that has remained under British occupation since Ireland was partitioned in 1921. Together, they make up the ‘United Kingdom’, also known as ‘Great Britain and Northern Ireland’.

Decades of resistance by Northern Ireland’s Irish nationalist/Catholic minority to discrimination and brutal repression, and the undefeated armed struggle of militant Irish nationalists against military occupation by the British Army, were brought to an end by the 1998 Good Friday Agreement. A key factor making this settlement possible was that both Ireland and Britain were members of the EU customs union, and this made the border between the two parts of Ireland invisible.

The Irish border—or rather, the British border that cuts through Ireland—has been and remains at the centre of the Brexit crisis, because anything less than frictionless trade between Britain and the EU will necessitate the reimposition of border controls, causing huge disruption to the economy of both parts of Ireland, and threatening to reignite the civil war. To avoid this possibility, the EU insisted that Northern Ireland should remain within the EU’s customs union, whatever the outcome of negotiations (which have yet to begin!) on Britain’s future trading relationship with the EU.

The Brexit crisis has put the reunification of Ireland back on the agenda. It also threatens to hasten the breakup of Britain itself, because, like in Northern Ireland, a majority of voters in Scotland voted to remain in the EU. A referendum on Scottish independence was narrowly defeated in 2014, and the Scottish National Party, Scotland’s leading political party, is now demanding a second referendum.

So, something good may yet come out of this mess!