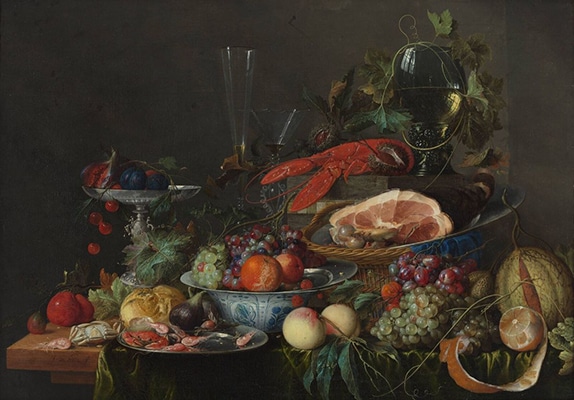 The Dutch Golden Age led to a tremendous outpouring of still-life paintings in the 17th century. Since then, critics have generally belonged to two opposing schools of thought when it comes to interpreting them.

On one side, the generally somber scenes are read symbolically through the lens of Christian religious traditions, often underscoring life’s transience (the proliferation of rotting fruit, withered flowers, and slowly draining hourglasses offer sobering examples of memento mori, reminders of death). Alternatively, scholars assess the artist’s skill in employing an array of visual effects in these banquet scenes, floral arrangements, or vanitas paintings. But while still lifes are generally thought to be devoid of narrative, certain deeper meanings come into focus once you look beyond the metaphors and showy artistic tricks.

The prosperous Dutch Golden Age was largely fostered by wealth reaped from overseas trading and colonial ventures. Exotic luxuries from all over the world poured into Dutch ports: fruits from across the Mediterranean; tobacco from the New World; spices and precious gems from India; tea, silk, and porcelain from China and Japan; sugar from colonies in Brazil and Guyana; and slaves from Africa. Private organizations like the Dutch East India Trading Company and the Dutch state aggressively pursued their economic agendas overseas, and the brutal legacy of colonialism is still felt today.

Hendrik Cornelisz Vroom – The Return to Amsterdam of the Second Expedition to the East Indies, 1599 “Asia > Amsterdam” at Rijksmuseum, Amsterdam

As the prosperity of Dutch society increased, the general public became more engrossed with the amusements of everyday life, including education, commerce, and material goods. These changes had enormous repercussions on the art market, and it’s no coincidence that the still life arose as an independent genre in Europe parallel to the birth of early market capitalism and the world’s first consumer society.

Naturally, Dutch citizens wanted to celebrate, and immortalize, the trappings of their newfound luxury. Therefore, from the beginning of the 17th century, Dutch artists started to incorporate these highly valued imports into their paintings. The genre evolved from smaller, modest compositions spotlighting locally available goods early in the century to larger, more sumptuous arrays of predominantly foreign commodities. The paintings became increasingly lavish and elaborate, in step with the growing affluence from trade that the Netherlands enjoyed.

In the early decades of the century, colorful ontbijtjes (“breakfast pieces”)—which typically show the ingredients of a simple meal—were in vogue. Clara Peeters, one of the few female artists from the time, is credited with helping to introduce this type of still life into the Dutch painting tradition. Her Still Life with Cheeses, Artichoke, and Cherries (ca. 1625) shows a richly painted, though humble, spread of mostly local products.

Indeed, the painting has a nationalistic flavor. The butter and huge cheese wheels that dominate the composition evince cultural pride in Dutch agriculture (milk, called the “noble liquid,” has become such an integral marker of Dutch heritage that Johannes Vermeer’s Milkmaid, 1657–58, seems almost a cliché). At the same time, this still life’s humility reflects prevailing Calvinist sentiments. The crust of the hard biscuit, symbolizing daily life, crumbles on the counter. The work is intensely realistic—every scrape of the serrated knife is reflected in the butter, for instance. The flowering artichoke and beautiful red cherries reflected on a silver plate punctuate the largely brown-hued composition. An eaten cherry at the edge of the table, only the stem and pit remaining, is a gentle reminder of the impermanence of life. But paintings, of course, were valued for their permanence. Here, the food never spoils. 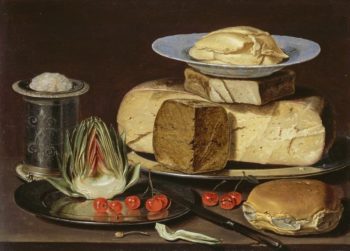 A decade or two later, commercial goods from all over the world began to be imported with more frequency. Such products became necessary, widely available property for everyday Dutchmen. A group of Haarlem-based painters, led by Pieter Claesz and Willem Claesz Heda, introduced banketjes (“banquet pieces”) into the still-life repertoire. These sumptuous paintings reflect and celebrate this increasing prosperity and the country’s international exploration (and dominance).

Heda’s Banquet Piece with Mince Pie from 1635 gathers a far more extravagant spread than Peeter’s quaint breakfast scene. The warm and muted palette here exemplifies the so-called “monochrome” style Dutch artists preferred for still lifes and landscapes between the 1620s and late 1640s. The gold, silver, and pewter accents pop against the neutral background and white tablecloth. The scale of this painting shows these foods and objects near life-size, and viewers are further drawn into the scene by the plates and lemon peel balancing precariously off the table ledge.

Among the offerings here are olives and a lemon imported from across the Mediterranean, oysters with vinegar, and precious seasonings like salt and peppercorn. The star of this banquet, however, is the mince pie. Seasoned with expensive imported currants and spices from India and the Near East, mince pie was a delicacy served only on festive occasions. 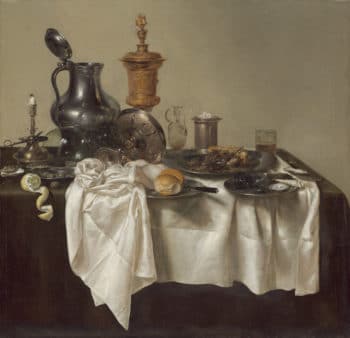 As Washington’s National Gallery of Art notes, among these trappings of wealth and indulgence, familiar omens of impermanence—and ultimately death—linger in the picture, where much is amiss: glasses are broken and goblets toppled; the pie lies half-eaten; the candle has gone out. The empty oyster shells littering the table advise a similar moral caution. As today, oysters were regarded as powerful aphrodisiacs. Juxtaposed with the uneaten roll in the center of the painting, the oysters suggest that these unseen banqueters, after enjoying the pleasures of the flesh, have ignored their salvation, signified by the bread of life.

In his 1990 book of essays Looking at the Overlooked, art historian Norman Bryson calls such a scene—of tipped-over goblets, stacked plates, rumpled tablecloths, and broken glasses—a “still life of disorder” that represents the ongoing battle between vice and pleasure, virtue and abstention. But symbols are often slippery: A broken glass, for instance, might also stand for wealth. It was an odd custom for pub patrons to throw glasses over their heads and pay extra for broken glassware (anyone who couldn’t afford to do this drank beer with the unwashed masses).

Following the end of the Eighty Years’ War with Hapsburg-controlled Spain in 1648, the Netherlands emerged as a vital political, economic, and cultural force. One of the consequences of independence was a shift in the balance of power. In increasingly urbanized Dutch cities like Amsterdam and Haarlem, an upper middle class of wealthy merchants, bankers, and traders held sway, rather than the aristocracy or a monarch.

The rising Dutch merchant class now had more expendable income than ever before, which they chose to use on improving their standard of living, including furnishing their homes with paintings. Much of the subject matter of Dutch art reflects the experiences and aspirations of middle-class urban elites, and the demand for high-quality pictures at affordable prices was insatiable. “Works of art, ranging from simple prints and copies to originals hung in almost all Dutch homes,” writes John Michael Montias in his 1991 book Vermeer and His Milieu: A Web of Social History. In 2004’s Enchanting the Eye: Dutch Paintings of the Golden Age, Christopher Lloyd estimates that between 1580 and 1800, approximately 5,000 artists produced between 9 and 10 million paintings (of those, less than 1 percent have survived).

Still lifes helpfully reminded viewers of the prosperity of their republic. At the height of the Golden Age, painters such as Willem Kalf produced fancy pronk (“display”) paintings depicting items like Chinese porcelain, Venetian glassware, and silver-gilt cups and trays. In Kalf’s Still Life with a Chinese bowl, a Nautilus Cup and Fruit (1662), the glistening effects of light, texture, and color foreground Kalf’s aspiration, like other painters of the era, to outcraft the craftsmen of the precious objects he depicts—such as the Persian carpet on the table, silver tray, and Chinese porcelain sugar bowl.

This bounty draws in different corners of the globe, a proud nod to the ever-expanding Dutch empire. By unpacking specific objects here, seemingly disparate cultures come together, connected by the Netherlands’s globalizing ambitions. The Ming sugar bowl, for instance, simultaneously suggests two different cross-cultural exchanges, one more sinister than the other. The sugar obliquely references one of the most barbaric elements of the global Dutch empire: the horrific, widely documented treatment of slaves on South American plantations. Meanwhile, the typical blue-and-white pattern on the bowl would later be adopted by Delft potters, leading to the famous “Delft Blue” of Dutch earthenware—which, therefore, has Chinese origins. Timothy Brook contends that such Chinese porcelains were so highly valued that the dish in Vermeer’s Girl Reading a Letter at an Open Window, painted around 1657, would have drawn the contemporary viewer’s eye from the young woman.

Abraham van Beyeren’s Still Life with Lobster and Fruit (ca. 1650s) is a far cry from the relative modesty of breakfast paintings made earlier in the century. Instead of white cloth, here the table is laid with a Persian carpet. Lobster replaces herring, imported wine is on offer instead of beer. Exotic fruits from warmer climates spill out of silver-gilt trays. Amidst these extravagant luxuries, the pocket watch in the lower right corner would have suggested to viewers the brevity of life.

Towards the end of the 1600s, still-life painting reached an apex of materialism and cultural insensitivity. In Juriaen van Streeck’s Still Life with Moor and Porcelain Vessels (ca. 1670), an African slave exotically dressed in a striped silk costume and crimson headgear carries a Chinese bowl filled with lemons and oranges behind a marble table spread with an oyster banquet. Incredibly, the presence of a human being doesn’t seem to violate the terms of the still life. Horrifying as it might seem to contemporary audiences, the slave signified wealth as an object much in the same way the lobster or jewels did; here, the Moor is offered up as if on a silver platter himself. The inclusion of African servants in still lifes was actually quite common. Sometimes, the sitter didn’t even own a slave, but requested one for an added sense of luxury and flamboyance—and textual luster—to the picture.

The embarrassment of riches in these paintings brings up an obvious question: Who consumes what, and at whose expense? The focus on commodity fetishism in still-life paintings from this era tends to ignore the colonial histories outside the frame, but they are central to the understanding of these works. Julie Berger Hochstrasser set the stage for a postcolonial critique of these works with her seminal 2007 book Still Life and Trade in the Dutch Golden Age. On the very first page, she establishes her innovative approach, quoting Karl Marx (who himself wrote quite a bit about early market capitalism in the Netherlands): “What is the value of a commodity? The objective form of the social labour expended in its production.” Mainstream critics, as well as arts institutions, have just begun to pick up the charge, thinking critically about the narratives these still lifes represent.

Far from examining some distant phenomenon, 17th-century Dutch still lifes offer an uncanny perspective on our own times, in which globalism and consumer culture seem to be reaching a peak, once again in tandem with one another. What are the true social costs of today’s most sought-after items, and why do people love to show them off? Nikes, iPhones, and designer clothes are imported from many of the same international sites the Dutch traded with hundreds of years ago (and employ similarly dubious labor practices). The next time you scroll past an Instagram influencer’s photo of an open suitcase artfully stuffed with exotic luxuries, remember that dark complexities can lurk behind even the most seemingly trivial of objects.
Monthly Review does not necessarily adhere to all of the views conveyed in articles republished at MR Online. Our goal is to share a variety of left perspectives that we think our readers will find interesting or useful. —Eds.