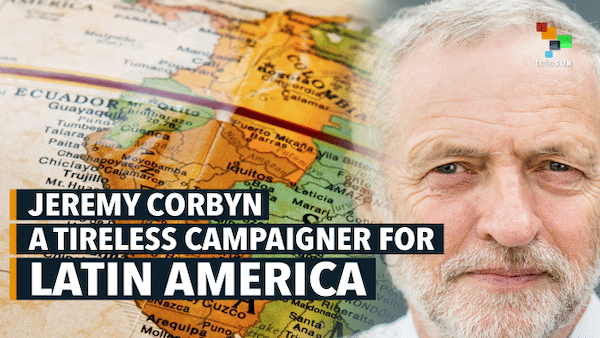 Corbyn, who has been serving as the Leader of the Labour Party since 2015, told Mexican newspaper La Jornada that he’ll be visiting Mexico for the inauguration of AMLO in December. “AMLO has shown an amazing personal and political courage for many decades,” Corbyn says.

Venezuelan President Nicolas Maduro may also be in attendance. Mexico’s President-elect has invited him to the inauguration Dec. 1.

The gesture is a break from Latin American efforts to isolate Maduro and Venezuela, especially from the so-called right-wing Lima Group which is comprised of 14 countries including Mexico.

“I think an ongoing issue is the question of control of resources, and the economic development of the continent,” he said.

I see in Latin America elites that have linked with the armed forces and global corporations.

Corbyn first visited Latin America in the 1960s and has taken interest in the region’s social movements, particularly in Bolivia.

“There is a huge ethnic diversity across Latin America that’s often not understood by people outside,” he said.

The diversity of Bolivia, for example, with Quechua being actually the dominant language, not Spanish. When that diversity is recognized you tend to get more inclusive governments.

Corbyn says he led a delegation in Bolivia years ago, observing the control of water, the mining industry, and the diversity in politics.

The idea that a non-Spanish speaking woman should be the author of the constitution of Bolivia was amazing and historic in so many ways. I’ve got a lot of respect for what they’ve achieved in Bolivia.

He also made a reference to Chile, in which,

The great Salvador Allende recognized the needs of the Mapuche people, who were until then ignored. I see that the strength of Latin America lies in uniting all peoples.

As the region’s political and economic powers trade hands in the coming months, such as in Mexico, Brazil, and Argentina, Corbyn says an international effort that includes Latin America is needed.

“I’m very clear that we have to build an international movement, which deals with economic injustice and inequality, and challenges the neoliberal agenda,” he said. “We need governments that think alike to work together on economic justice and we’ll absolutely do that.”