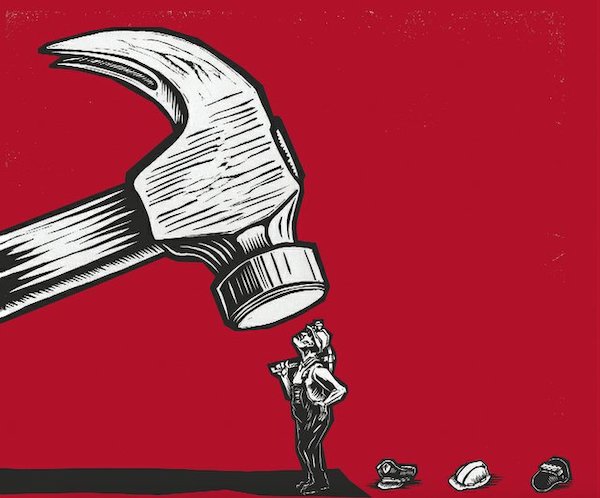 Organizing a union is no easy task in the United States. Although organizing a union is supposed to be a protected right, businesses regularly fire union supporters knowing that they face minimal punishment even if found guilty for their actions. In fact, the rights of all workers, regardless of their interest in unionization, are being whittled down. Simply put, U.S. law doesn’t work for workers.

Moshe Z. Marvit, writing in the newspaper In These Times, provides a recent example of the ongoing legal attack on union rights, in this case those of unionized janitors. As he explains, the National Labor Relations Board, using a provision of the 1947 Taft-Hartley Act designed to weaken labor solidarity:

ruled [in October 2018] that janitors in San Francisco violated the law when they picketed in front of their workplace to win higher wages, better working conditions and freedom from sexual harassment in their workplace.

The provision in question is one that prohibits workers from engaging in actions against a so-called “secondary” employer. The provision makes it illegal for workers to organize boycotts or pickets directed against an employer with which the union does not have a dispute in order to get that firm to pressure the union’s employer to settle its dispute with the union.

The NLRB’s ruling dramatically stretches the meaning of this provision, in that the San Francisco janitors were actually engaged in workplace actions against an employer that had significant influence over their terms of employment. However, Board members were able to justify their ruling thanks to the complexities generated by the increasingly common corporate strategy of subcontracting.

In this case, the janitors were employed by Ortiz Janitorial Services, which was in turn subcontracted by Preferred Building Services, to work in the building of yet a third company. An administrative law judge had previously ruled that Preferred Building Services had meaninful control over the employment terms of the janitors hired by Ortiz Janitorial Services.

More specifically, the judge found “that Preferred Building Services was involved in the hiring, firing, disciplining, supervision, direction of work, and other terms and conditions of the janitors’ employment with Ortiz Janitorial Services.” That made Ortiz and Preferred joint employers of the janitors, and the worker’s actions legal. Undeterred, the NLRB simply rejected the administrative law judge’s ruling, declaring instead that the janitors worked only for Ortiz which made the worker’s actions, which were also aimed at Preferred, illegal.

The NLRB’s recent case restricting the picketing rights of subcontractors, temps and other workers who do not have a single direct employment relationship is a further sign that the labor board will continue limiting its joint employer doctrine. This will make it more difficult or even impossible for many workers to have any meaningful voice in the workplace. But the case also highlights some of the core problems of labor law as it currently exists. By being included under the NLRA, workers lose basic rights that all other Americans enjoy.

Given how important the use of subcontracted labor has become, it should surprise no one that Trump’s appointees to the National Labor Relations Board are actively working to tighten the standard under which workers can claim to face, and organize against, a joint employer.

But the attack on worker rights is not limited to efforts to weaken union power. The Supreme Court, in a 5-4 vote in May, ruled in Epic Systems Corp v. Lewis, that employers can include a clause in their employment contract requiring nonunion workers to arbitrate their disputes individually, a ruling that eliminates the ability of workers to sue a company for workplace violations or use collective actions such as class action suits. The ruling resolved three separate cases–Epic Systems Corp. v. Lewis, Ernst & Young LLP v. Morris, and National Labor Relations Board v. Murphy Oil USA–that were argued together in front of the Court on the same day because they all raised the same basic issue.

On April 2, 2014, Jacob Lewis, who was a technical writer for Epic Systems, received an email from his employer with a document titled “Mutual Arbitration Agreement Regarding Wages and Hours.” The document stated that the employee and the employer waive their rights to go to court and instead agreed to take all wage and hour claims to arbitration. Furthermore, unlike in court, the employee agreed that any arbitration would be one-on-one. This “agreement” did not provide any opportunity to negotiate, and it had no place to sign or refuse to sign. Instead, it stated, “I understand that if I continue to work at Epic, I will be deemed to have accepted this Agreement.” The workers had two choices: immediately quit or accept the agreement. . . .

When Lewis tried to take Epic Systems to court for misclassifying him and his fellow workers as independent contractors and depriving them of overtime pay, he realized that by opening the email and continuing to work, he waved his right to bring a collective action or go to court.

As the Court saw it, the case pitted the Federal Arbitration Act against the National Labor Relations Act. The former established a legal foundation for using one-on-one arbitration to settle disputes while the latter gives workers the right to work together for “mutual aid and protection.” The Court’s ruling priviledged arbitration.

As for loud liberal voices—union and nonunion—that declare unions as a thing of the past, the forthcoming SCOTUS ruling on NLRB v Murphy Oil will prove most of the nonunion “innovations” moot. Murphy Oil is a complicated legal case that boils down to removing what are called the Section 7 protections under the National Labor Relations Act, and preventing class action lawsuits.

Murphy Oil blows a hole through the legal safeguards that non-union workers have enjoyed for decades, eviscerating much of the tactical repertoire of so-called Alt Labor, such as class-action wage-theft cases, and workers participating in protests called by nonunion community groups in front of their workplaces. The timing is horrific and uncanny: As women are finally finding their voices about sexual harassment at work, mostly in nonunion workplaces (as the majority are), Murphy Oil will prevent class action sexual harassment lawsuits.

The Epic Systems decision is a big deal, since there is a growing and already sizeable use of mandatory arbitration by employers.  A study by the Economic Policy Institute found that:

The Court’s decision means that workers without unions will have little power. The NLRB’s decision weakens the laws that are supposed to protect union rights. The only effective response to this trend is, as the recent wave of teacher strikes demonstrated, militant, rank and file-led union organizing, with strong community involvement and support. Hopefully, exposing the class-biased nature of U.S. laws may help encourage this kind of activism.