ANTI-FASCISTS mobilised in Edinburgh today against former Donald Trump aide and racist-in-chief Steve Bannon speaking at a conference in the city.

One protester was arrested for “breach of the peace” for apparently waving a hand-made placard bearing the words “nae nazis” with a picture of a swastika with a red line through it. 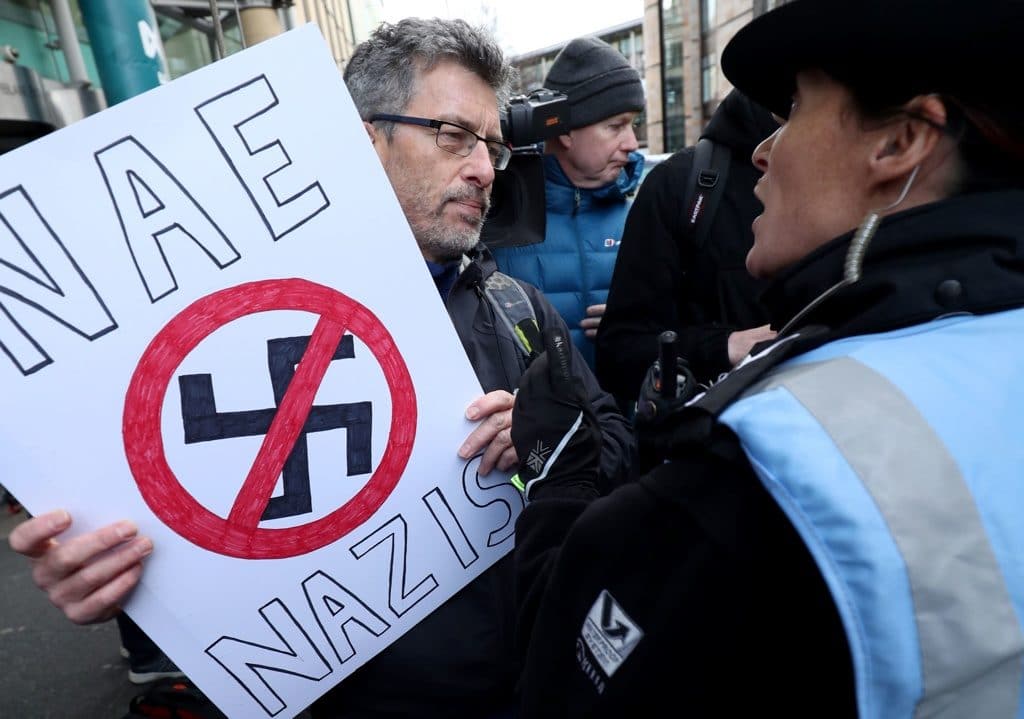 Protesters made and displayed half a dozen identical placards in response.

Police made no more arrests, though they deployed large numbers of officers to enable Mr Bannon to speak.

Raymie, a protester from Glasgow Stand Up to Racism group, told the Star: “There were well over 100 people here. The conference organisers changed the time Bannon was due to speak a couple of times.

“The police were ridiculous. They arrested an anti-fascist protester for holding an anti-nazi placard. It had a swastika on it, crossed out. A lot of other people then made the same placard.”

The conference was organised by the European Broadcasting Union, including BBC Scotland, which attempted to justify Mr Bannon’s invitation by saying it would give people an opportunity to challenge his views.

Unison Scotland’s Tara McCarthy said: “Let it be clear, the invitation of Steve Bannon, who is widely recognised as holding fascist and anti-semitic views, does not legitimise him or the vile vitriol he spreads.

“The vast majority of Scottish citizens oppose his rhetoric and oppose this visit to Scotland. The European Broadcasting Union and BBC Scotland are seriously misguided by suggesting that his appearance offers an opportunity to challenge his views.

“What they have done instead is provide a platform to a vicious individual, whose views will regrettably resonate with a tiny minority who subscribe to his race-hate agenda.”

Mr Bannon has close links with white supremacist groups in the United States who celebrated Mr Trump’s election to the White House.

Scotland’s First Minister Nicola Sturgeon pulled out of the event due to Mr Bannon’s inclusion, stating she would “not be part of any process that risks legitimising or normalising far-right, racist views.”

Mr Bannon is also due to speak at the Oxford Union tomorrow. Oxford Union delights in inviting speakers who court controversy, including those with racist and fascist views.

Other Oxford Union guests have included the co-founder of the English Defence League Tommy Robinson, Marine Le Pen of the French Front National and Alice Weidel of German neonazi movement the AfD.

Oxford Stand Up To Racism and Oxford Unite Against Fascism have called a mass protest.

Ian Mckendrick of Oxford Stand Up To Racism said: “Bannon is attempting to build an Islamophobic international of far-right groups and is looking to fascist Tommy Robinson here in Britain as a key figure for his movement.”

“[Bannon’s invitation] can only give confidence to racists and the far right to mobilise here. At a time of rising racist attacks and increased far-right and fascist activity in the UK, this is dangerous and negligent of the peace and safety of Oxford’s diverse community.”