A few days from now–on 29-30 November–a very large number of people will gather in New Delhi, the capital of India, to say that they stand with India’s farmers (kisans). This protest–Dilli Chalo (Let’s Go to Delhi)–will bring farmers certainly, but also industrial workers and hi-tech workers, students and teachers, lawyers and bankers, public health workers and childcare workers, autorickshaw drivers and artists. The point of the demonstration is to demand that the Indian Parliament hold a special session to discuss the agrarian crisis. In rural India, 70% of India’s population sits beneath the waters of debt and despair. The image above of the Indian Parliament held up by farmers is by our friend and comrade Orijit Sen.

Earlier this year, in March, 50,000 farmers descended on India’s financial capital, Mumbai, where they forced the right-wing government to meet some of their demands. This Kisan Long March, led by the All-India Kisan Sabha (the farmer’s front of the Communist Party of India-Marxist or CPI-M) captured the imagination of the country. In September, 200,000 farmers and workers came to Delhi to put pressure on the right-wing government that has destroyed the basis of their livelihood. As T. K. Rajalakshmi wrote in her Frontline report, ‘It was not a coincidence that women constituted a good proportion of the nearly 200,000 rallyists. Rising prices of essential items, including food items, with no commensurate increase in wages has been a major cause for discontent’. Now it is not just the farmers who will come to the capital city but those who believe that it is imperative to stand with the farmers.

Our Tricontinental: Institute for Social Research Senior Fellow P. Sainath is one of the architects of this Dilli Chalo agitation. His interview with Pranjal of Newsclick is essential viewing. The government has changed the way drought is measured so that farmers do not receive relief at the same time as insurance companies and banks defraud farmers through insurance schemes. Apart from the insurance schemes, banks have been extremely harsh with peasants who have borrowed money and absurdly lax with corrupt billionaires who have also borrowed money. As an editorial in Economic & Political Weekly notes, ‘some banks seem to have adopted hard and humiliating measures in order to recover these loans. Notably too, some of these banks have adopted a rather generous attitude towards certain individuals who are guilty of defaulting on their loans to the tune of several thousands of crores [a crore is ten million]. A large number of farmers are the victims of this discriminatory approach of the banks’.

The title for this newsletter comes from a poem by Mohammed Iqbal (1877-1938), one of the great poets of South Asia. In his poem, Farman-e-Khuda, Iqbal sings,

If the field does not provide food for the peasant,
Then burn every stack of wheat from that field.

Our friends in the Pakistani band Laal sang a lovely version of this poem during the Anjuman Muzareen (Tenant Association) March for land rights in 2010. You can watch it below.

Since India’s economy liberalised, well over 300,000 farmers have committed suicide. This is a universal problem, including in the United States where farmers are killing themselves in record numbers. From the Philippines to Peru, agriculture is dying a slow and sure death. Prime agricultural land is sold off for real estate development–for malls and housing. The problems are the same: high input costs (seeds, fertilisers, pesticides), poor land ownership patterns (tenant farming is prohibitively expensive for the peasant), poor State infrastructure (cooperative centres for the processing of crops to increase their value, irrigation, roads), and of course catastrophically difficult problems with finance (debt is the scourge of the farmer). The global commodity chain advantages the monopoly retail firms rather than the peasantry. Big supermarket chains continue to make money, while farmers plunge off the debt cliff.

If the field does not provide food for the peasant, then burn every stack of wheat from that field. 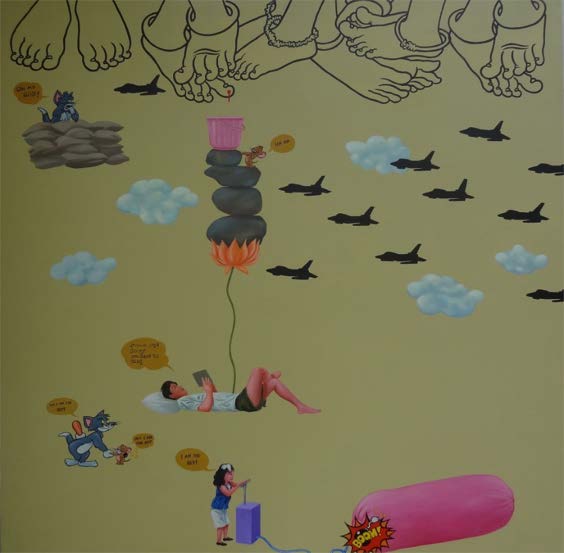 The farmers and their supporters that will march in Delhi come because they are organised. One of the key problems in our time is the despair of atomisation. To be without a movement and an organisation is to be disarmed in a political struggle. If not for the farmers’ organisations and the Left parties, there would be no effective fight-back against the right-wing assault on their livelihood and lives.

The importance of organisation is acknowledged by the right-wing forces, which is why they use every element of state power to destroy the left and to break the confidence of the activists in the working-class, the peasantry and in the oppressed communities. From Tripura in north-east India to Antioquia in north-west Colombia, militants of the people are being picked off one by one. To silence dissent by murder or intimidation is to silence the confidence of the workers and the peasants, of the oppressed communities and the marginalised social groups. We have lists of people who have been killed–Ana María Cortés, Felicinda Santamaria, Holmes Niscué, Luis Barrios, Ajendra Reang, Anima Das, Pradeep Deb Barma, Rakesh Dhar, Tapas Sutradhar. They worked to organise indigenous communities and factory workers, farmers and students.

Investigations of their deaths are not taken seriously. It is almost as if their deaths are an inevitability; their occurrence does not seem to raise eyebrows or provoke the attention of the judicial system. The incoming president of Brazil–Jair Bolsonaro–has said that the military dictatorship ‘should have killed 30,000’ more people than they did–a prophylactic action for the oligarchy. The investigation into the assassination of the militant Marielle Franco in March has been glacial. No-one is paying attention to the murder of the Movement of Rural Landless Workers (MST) militant Márcio Matos, murdered in January.

Part of the policy of weakening the left will be an increased attack not only on the militants of the MST, but also on the settlements. Last week, two hundred families at a three-year-old MST encampment in Maranhão state were evicted. Four hundred and fifty families who live in an MST settlement in Minas Gerais are threatened by a court order for eviction. Bolsonaro has said that he would consider the MST as an ‘outlaw’ or ‘terrorist’ organisation, part of the agenda to break the organisational power of the left and to atomize the population. Tripura and Colombia could be mirrored in Brazil or even – as MST leader João Pedro Stedile says–Chile under Pinochet.

In my column this week on these killings and on the attempt to kill the confidence of the working people, I imagine another present:

In an alternative world, Holmes Niscué, a left-wing Colombian indigenous leader, would meet Ajendra Reang, a CPI-M activist of the Tribal Youth Federation, at a meeting on indigenous rights. They would talk through a translator and find a common agenda, a way to tackle the marginalization of indigenous populations and the theft of resources from land controlled by indigenous communities. In that alternative world, Ana María Cortés and Rakesh Dhar would exchange notes on the economic collapse of their towns and talk honestly about the difficulty of organizing resistance. These were all decent people who wanted to make the world a better place. Now they are dead.

Next month, our Tricontinental: Institute for Social Research dossier will be on the work of the Abahlali baseMjondolo in South Africa. It will show how the shack dwellers fight to build their confidence in their struggle against a heartless system. It will also detail the violence visited upon the very poor organisers, violence that goes from intimidation to assassination. Please keep an eye out for it (for a preview, see the Tricontinental: Institute for Social Research coordinator Celina della Croce’s article on AbM).

The painting above is by a young artist from Tripura–Mrinmoy Debbarma. It is called Oh My God (2015). 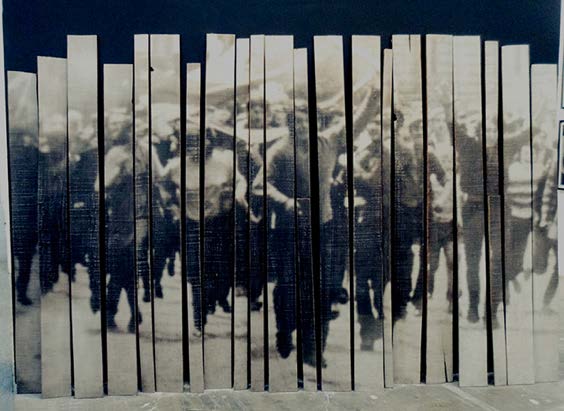 Last week, Greg Wilpert of The Real News Network and I talked about the IMF’s return to South America (for more on this see our Dossier on the IMF’s return to Argentina). Towards the close of the interview, Greg asked me a very important question about the IMF’s new strategy in the region and elsewhere. It is true that in most countries, the IMF has already been able to get countries to dismantle subsidy regimes and to destroy social welfare. This is the case not only in the Global South, but also in countries of the West–such as Great Britain (for which, see here how its increased poverty should be linked to the discussion around Brexit). The new agenda of the IMF, which includes targeted or means-tested welfare relief–is designed to break any community and social bonds and create a cultural world that is shaped by individualism and atomisation. The basic ethos is to break community ties and to shape interests around individual self-interest (and at the most, family self-interest).

But, of course, as Adam Smith’s ‘invisible hand’ undermines communities ties, the ‘invisible heart’ has to take over to maintain society. When the UN’s Special Rapporteur Philip Alston says that ‘poverty is a political choice’, he clearly says that it is government policy masquerading as market forces (the ‘invisible hand’) that creates impoverishment. In a society thrown into poverty, the absence of state institutional support forces threadbare familial and community institutions–the invisible heart–to take over. Women in particular have been working extra shifts to hold together family lives that have been slowly but surely made harder as the State withdraws its various support mechanisms.

Kate Donald and Nicholas Lusiani from the Centre for Economic and Social Rights, with the Bretton Woods Project, have a very important briefing–The gendered costs of austerity: Assessing the IMF’s role in budget cuts which threaten women’s rights. IMF policies that destroy community life–including state support–adversely impact women of the working-class and peasantry. That’s the bottom line. All the pabulum about gender sensitivity that we hear from the IMF and the World Bank is hard to take seriously when their basic policy prescriptions undermine the possibility of women’s emancipation.

This week, we celebrate the birth of Zilda Xavier Pereira (1925-2105)—Brazilian feminist activist and revolutionary (see below). Born in Recife, she joined the Communist Party of Brazil at age 20, becoming an exemplary militant. With the coup d’état of 1964 she joined the armed struggle with Carlos Marighella as part of the leadership of the National Liberation Action (ALN), the largest guerrilla organisation in Brazil. Her two sons and partner, Marighella, were assassinated by agents of the dictatorship. Zilda dedicated her whole life in defence of the people of Brazil against the oligarchy and its imperialist partner. 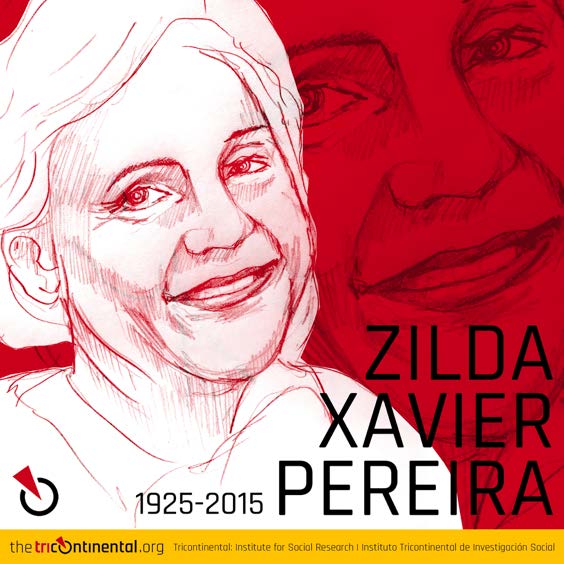