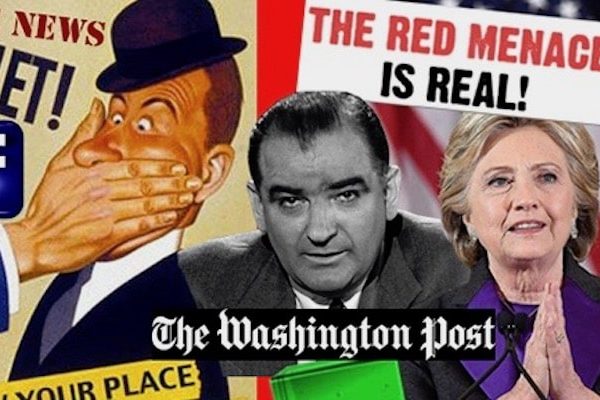 Posted Nov 26, 2018 by Glen Ford
Media , Strategy Russia , United States Newswire
Originally published: Black Agenda Report (November 22, 2018)   |
The Democrats and their media have fashioned a trap for Blacks and browns: accept endless foreign wars and domestic austerity in return for the representation of dark faces in high places in the governing hierarchy.

The Kenyan proverb tells us, “When elephants fight, the grass suffers.” In contemporary capitalist circumstances, the raging split in the U.S. ruling class, now in its third year, tramples simple truths and common sense beyond recognition, stupefying the whole corporate herd. That wouldn’t necessarily be a bad thing, except that the common folk, including self-styled “progressives” and “resisters,” have been imbibing the same mind-deadening media brew as the rulers are drinking, as can be expected under a corporate communications dictatorship. When the media moguls go mad, as they have been for the last two years, the insanity becomes general.

It is also true that, when the slave adopts her master’s vocabulary and shares his enemies, she no longer requires an overseer, but will whip herself into obedience. If Malcolm X were alive, he would tell us that Black Democrats are playing a fool’s game if they think they can get a good deal for their constituents by navigating the cracks in the rich man’s duopoly. There is no fundamental disagreement within the white ruling class on the necessity of endless war and austerity in order to maintain their grip on global power. The split arises over HOW to sustain that white supremacist, capitalist order.

Donald Trump threw his class brethren into a panic when he succeeded in assembling an Electoral College majority, in 2016. His formula for victory was to promise the nation’s largest effective political bloc — white people that prioritize racial dominance, and who are correctly called racists — that their “America” would be made great again, with all the imagined advantages to their group. It is a tried and true rich white man’s strategy, one that was never fully abandoned by either of the two corporate U.S. political parties — the Republican “wolves” and the Democratic “foxes,” as Malcolm dubbed them.

Trump gave the still politically potent white racist masses red-meat rhetoric to satisfy their hunger for palpable evidence of the continued sanctity of white skin privilege and status, as guaranteed to them by their “forefathers.” Since U.S. elections are, by careful design, contests between factions of the ruling class, Trump’s strategy was to demonize the rich folks that had sold out “good Americans’” jobs to China and were wasting national treasure and lives in wars of “regime change” and “nation-building” in “shit-hole” countries. Thus, in championing domestic white supremacy, Trump blamed the Democrat-aligned factions of the ruling class for endless wars and a job-draining austerity regime that, somehow, elevated Black and brown people.

This was very bad corporate manners, and sufficient to galvanize most of the ruling class behind Hillary Clinton and the Democratic “foxes,” who were fully aware that U.S. imperialism was, indeed, losing its global contest with the command economy of China, and had already lost its proxy jihadist war against a Syrian government buttressed by Russia. Trump’s snipes at U.S. war and trade policy marked him as an undependable imperialist, at best, and a class traitor, at worst.

The Democratic ruling class faction, already dependent on Black voters for one quarter of its national base and eager to solidify its hold on Hispanics, had long been reconciled, albeit grudgingly, to the necessity of a “rainbow party” electoral strategy. But Black and brown representation within the party does not – must not – mean retreat from the core strategy of endless wars and austerity, the only future that late-stage capitalism envisions for the planet. Therefore, in order to both rescue the imperial project and reclaim a domestic electoral majority, the Democrats — now the most aggressive “War Party” and the true party of the ruling class — portray Trump as an ally of Russia and themselves as the party of “diversity.”

They have fashioned a trap for Blacks and browns: accept endless foreign wars and domestic austerity in return for the representation of dark faces in high places in the governing hierarchy. This is the purpose of the Democrats’ Trump vs. Anti-Trump equation: Black and brown collaboration with white corporate rule in the twilight of ever-consolidating capitalism — a regime that requires the maintenance of the Mass Black Incarceration State. It means reducing Black politics to accommodation with the purported “rainbow” faction of the ruling class, assisting in Jeff Bezos’s infinite acquisitions, Silicon Valley’s relentless intrusions, Citibank’s all-consuming thievery and gentrification, and the military industrial complex’s ever-escalating holocausts.

That’s a “Satan’s Sandwich,” to borrow the words of Black Kansas City congressman Emanuel Cleaver, when asked to endorse President Obama’s “Grand Bargain” with the Republicans for trillion dollar social spending cuts. Obama’s bipartisan deal remains in effect, because austerity is Democratic Party policy, just as it is Republican policy under Donald Trump – austerity for the masses plus gargantuan tax cuts for the rich. Democratic congressional leaders Nancy Pelosi and Chuck Schumer have no plans to roll back Trump’s tax cuts, and 60 percent of Democrats supported giving Trump an even bigger military budget than he asked for. Pelosi is keeping her promise to oppose spending measures that are not “pay-as-you-go ,” requiring tax hikes or cuts in other programs. And Democratic leadership will do everything in its power to throttle Medicare-For-All single payer health care, a program for which there is a national consensus of at least 70 percent — 85 percent of Democrats and even majorities of Republicans! – because the ruling class opposes it.

Given that virtually all Democrats want single payer, as do half of Republicans, the effective opposition to Medicare-for-All are the corporate congressional Democrats that thwart the will of their party base. The same goes for issues of war and peace. The reality of U.S. political alignments is that the white racist voting base — about half the white electorate — appears irreducible unless white supremacists are presented with a stark and substantive choice between their family’s physical well-being and the imperative to express hatred of non-whites. Such legislative initiatives cannot come from the Republican Party, which is the White Man’s Party, dedicated to racist reaction, but they are determinedly strangled by corporate Democrats. The inescapable conclusion, therefore, is that the Democratic Party is the primary mechanism that suppresses progressive thought and action in the United States. The party is a finely tuned ruling class tool, whose greatest accomplishment in the post-civil rights era has been to contain and harness the Black electorate, the most pro-peace and leftist polity in the nation.

And now they have succeeded in further strangling this progressive bastion — with a fake “Russian” noose. The duplicity of the Democrats, and the Democratic corporate media, is obvious in their reaction to Donald Trump’s firing of Attorney General Jeff Sessions, the die-hard, deep-fried Alabama segregationist and law-and-order cracker who was Trump’s earliest supporter in the U.S. Senate. Every decent person should have been celebrating the dismissal of this miscreant as the top cop of the country – whatever Trump’s reasons. But top Democrats and pundits reacted as if Session’s exit was a disaster because it might endanger the Mueller investigation into Trump’s alleged “collusion” with Moscow and Wikileaks. The ruling class priority — and, therefore, the Democratic Party’s main concern — is not to battle white supremacy, but to gin up anti-Russia hysteria and thus justify endless war and the austerity that accompanies it.

Accordingly, Democrats see no contradiction in their glee at word that the Trump administration is planning to prosecute Wikileaks founder Julian Assange , possibly on espionage charges stemming from leaks during the Obama administration. If Trump and Wikileaks conspired with “the Russians” to sabotage Hillary Clinton’s campaign, then why is Trump preparing to prosecute his supposed co-colluder? Wouldn’t that be an invitation to Assange to rat Trump out?

But of course, there was no collusion; if there were, then some smidgeon of proof would have been presented over the past two years, yet there has been none. It’s all about war and austerity, and keeping the lid on growing discontent and despair among the populace in the imperial headquarters country. And especially about making Black people believe that Putin is an ally of their arch enemy, Trump, and that the Democrats are their friends.

As Malcolm told us (take your pick of the quotes below, they’re all relevant and true):

Don’t you run around here trying to make friends with somebody who’s depriving you of your rights. They’re not your friends, no, they’re your enemies. Treat them like that.

The media’s the most powerful entity on earth. They have the power to make the innocent guilty and to make the guilty innocent, and that’s power. Because they control the minds of the masses.

[The Negro] should realize that he is living in a war zone, and he is at war with an enemy that is as vicious and criminal and inhuman as any war-making country has ever been.

If the field cannot feed the farmer, then burn the field
Fake news on WhatsApp swayed Brazil’s election. India should be worried