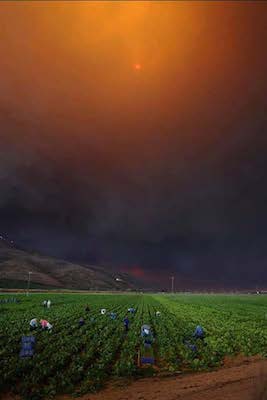 Drought and human encroachment into forest lands contributed to the terrible fires in California (United States of America). The picture above, taken by Andy Holzman (Southern California News Service) at a farm in Camarillo, shows farm workers bent over the crops despite the cascading fires. The smoke billows over them, the working conditions inhumane. And yet, the farmers continue to work. It is either this or their families starve. The choice is stark. The picture crisply captures the class dynamics in our world–the health and safety of those who work the land and work in factories, who work in mines and who work in garbage dumps, is of so little consequence to those who shape policy and who control property.

The poet Lorna Dee Cervantes writes, ‘work is the refuge of sadness’.

Earlier this month, in Savar (Bangladesh), over 1400 delegates came to the fourth People’s Health Assembly–first held in 2000 by popular health organisations to drive a global dynamic to champion public health measures. At the centre of the discussions were increased health inequalities–between the rich and the poor certainly, but also sharply between affluent states and states that have found their wealth robbed by colonialism and the adverse order produced over the past fifty years. The keynote address at the conference was delivered by Eduardo Espinoza, the deputy health minister of El Salvador, who said sharply, ‘There is no way forward other than changing the development model which has resulted in the current crisis’. By ‘development model’ Espinoza means the trade and development agenda that allows monopoly firms to dictate terms to the poorer nations and that forces these countries to suffocate their agenda for social progress. (for full coverage of the Assembly, please see here for reports by P. Ambedkar and Subin Dennis from the Delhi office of Tricontinental: Institute for Social Research). 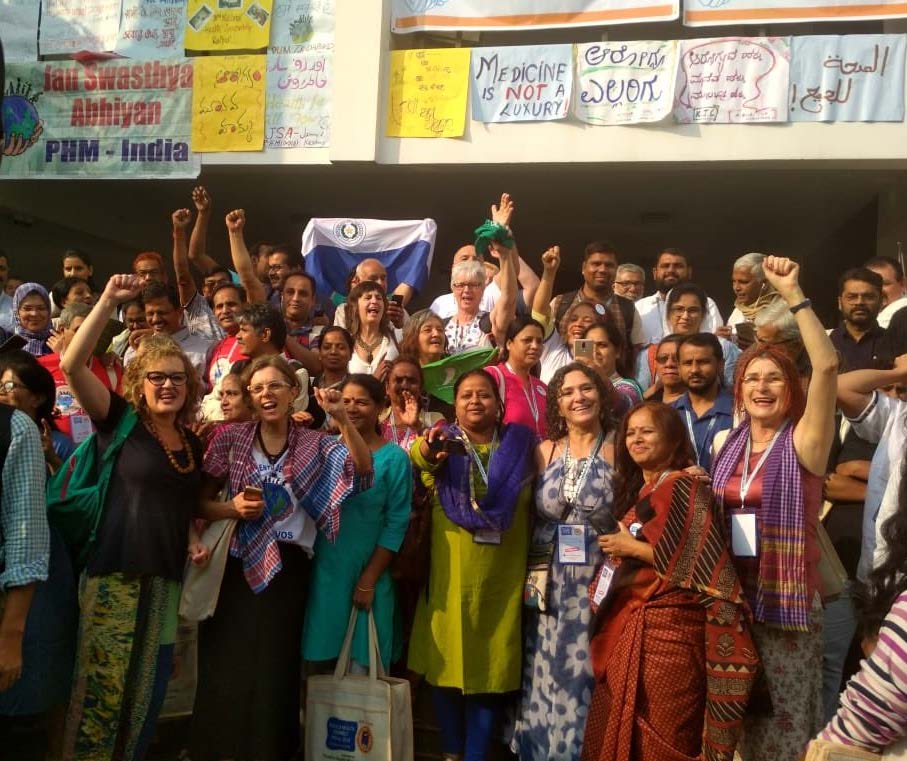 World AIDS Day is on 1 December. This is the 30th year of this commemorative day started by the United Nations as a way to focus attention on the crisis of HIV-AIDS. Concern over the problem of HIV-AIDS is no longer at emergency levels–even though the numbers of people with HIV has increased over the years. It appears not to be a concern because the bulk of the newly infected are not in the affluent states but are in the Global South–mainly on the African continent. Espinoza’s statement about the ‘development model’ explains how the HIV-AIDS epidemic afflicts the South. States in Africa, Asia and Latin America have been under pressure from the International Monetary Fund (IMF) to cut back on their public health programmes and these states have struggled with pharmaceutical companies to get drugs at low cost. Not only, therefore, does the IMF help destroy the mechanisms to identify the HIV virus, but those who are infected do not have easy access to drugs. The UN has hoped to eradicate HIV-AIDS by 2030. This is now a false hope. The development model–as Espinoza put it–is making the world sicker, not healthier.

‘Will we be brave enough’ to change this model, Espinoza asked in Bangladesh. It is a good question. So was the challenge posed by Chiara Bodini, the co-chair of the People’s Health Movement. She called for the strengthening of a movement for health.

But that movement is weak and unable to confront the power of the IMF and the monopoly pharmaceutical companies. Nor is it able to confront the logic of capitalism. As I show in my column this week, the U.S. investment giant Goldman Sachs has said unequivocally that cures for illnesses are not profitable. If gene therapy is able to lift patients out of illness, then there will be a ‘gradual exhaustion of the prevalent pool of patients’. It is illness that makes money, not health. Astronomical profits are made by monopoly pharmaceutical companies that often rely upon public financing for research and that hide their medicines behind ruthless and inhumane intellectual property regimes. It costs Gilead Sciences US$6 to manufacture a month’s dose for one patient of Truvada, a drug essential for HIV treatment. But the company–which earned US$26.11 billion last year–retails this drug for US$1500 a month. There is no future in this economic model. The few will continue to make vast amounts of money, while the many will fall into debt and death. 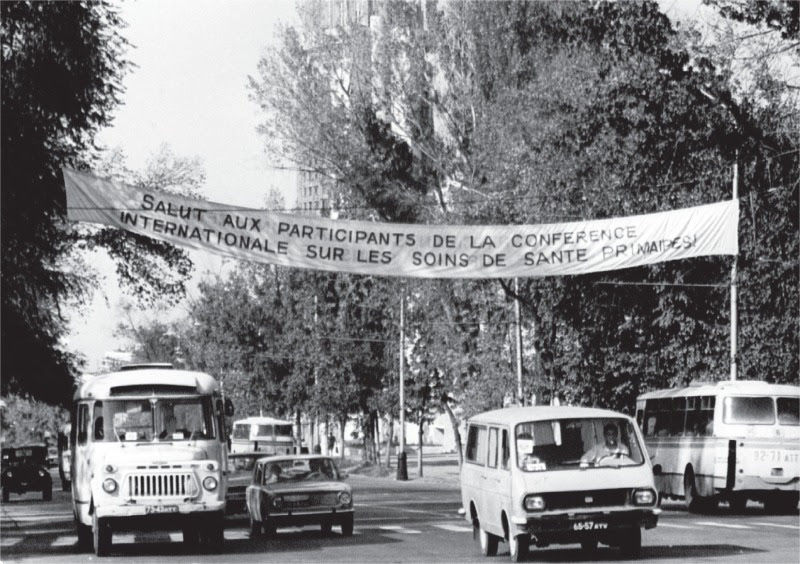 The title of this newsletter is from the Alma Ata Declaration. In 1978, representatives from 134 countries and 67 organisations met in the Lenin Convention Centre in Alma Ata (today’s Almaty) in the USSR. They were brought there by the World Health Organisation and UNICEF, the UN children’s fund. The Declaration was part of the ethos of the New International Economic Order (NIEO), passed by the UN General Assembly in 1974. The hope was to produce a world order that was not inequitable and that allowed the new post-colonial states to create programmes for social development. The key call at Alma Ata was for primary health care. A pre-conference document called for the ‘transfer of a greater share of health resources to the under-served majority of the population’. It demanded ‘a more equitable distribution of international health resources’. Primary Health Care, noted an internal document, was ‘a code word’ for ‘the international and national cry for social equality and justice’.

We are so far away from Alma Ata. I first heard of the Declaration almost three decades ago from my friend and comrade Dr. Amit Sengupta, then of the Delhi Science Forum. This week, Amit died in Goa (India). He was a leader in India’s people’s science movement and the people’s health movement. Amit was the associate global coordinator of the People’s Health Movement–which recently held the meeting in Bangladesh (please see the note from LeftWord Books on Amit). Amit’s principles are cemented in the People’s Health Charter (2000), whose preamble says, ‘Inequality, poverty, exploitation, violence and injustice are at the root of ill-health and the deaths of poor and marginalised people. Health for all means that powerful interests have to be challenged’. In a recent article, Amit returned to the Alma Ata Declaration. ‘Social justice’, he wrote, is ‘a matter of life and death’. 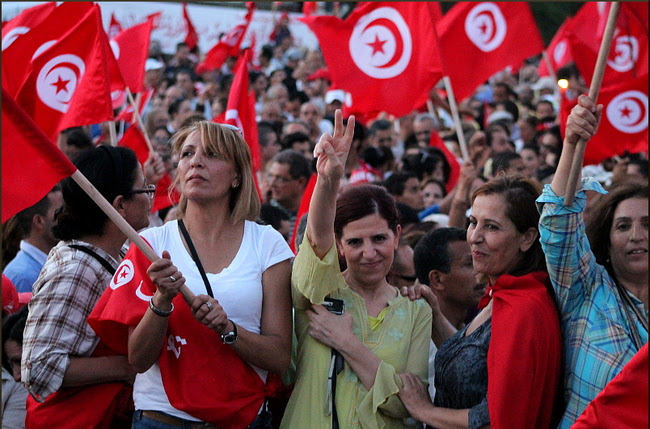 Social justice is not a gift of the powerful. It has to be fought for by the people, whose sacrifices and struggles make our world a happier place. In Tunisia, the government has been forced by social struggle to adopt an equal inheritance law, a law that no longer privileges men over women (see above). In Ecuador, it will be the protests by students and teachers that might reverse the government’s decision to cut education funding. In France, it will be the protests of the yellow vests (gilets jaunes) that will undo the fuel price hikes from the Macron government.

It is always the fight of the marginal and the vulnerable that allows human ideals to remain alive in our world.

This is why our friends in the MST have asked us to join their campaign against companies that benefit from the expulsion of MST members from the Quilombo Campo Grande. At this cooperative, 450 families produce organic food, including coffee. The beneficiary of this expulsion is João Faria de Silva, the owner of Terra Forte Café Company. The MST has begun an international campaign against monopoly firms that buy goods from this company. These firms include Nestlé and Nescafe. The hashtag for this campaign is #NoMeuBuleNão (NotInMyCoffeePot). Please read my note on it here.

This week, we celebrate the birthday of Fredrich Engels (1820-1895), the collaborator of Karl Marx and one of the key intellectuals of the socialist movement in the 19th century. In his landmark book The Condition of the Working Class in England (1844), Engels investigated the lives of the workers who produced the wealth of the United Kingdom. Recently, the economist Utsa Patnaik said that the British colonialists siphoned off $45 trillion from India. That was the down payment for the British industrial revolution. It was the money that was then used to hire the workers, who lived in wretched conditions as British capitalists built up their astronomical wealth. In his book, Engels writes of the lives of the workers,

All conceivable evils are heaped upon the heads of the poor. If the population of great cities is too dense in general, it is they in particular who are packed into the least space. As though the vitiated atmosphere of the streets were not enough, they are penned in dozens into single rooms, so that the air which they breathe at night is enough in itself to stifle them. They are given damp dwellings, cellar dens that are not waterproof from below or garrets that leak from above. Their houses are so built that the clammy air cannot escape. They are supplied bad, tattered, or rotten clothing, adulterated and indigestible food. They are exposed to the most exciting changes of mental condition, the most violent vibrations between hope and fear; they are hunted like game, and not permitted to attain peace of mind and quiet enjoyment of life.

And then, Engels asks, ‘How is it possible, under such conditions, for the lower class to be healthy and long lived? What else can be expected than an excessive mortality, an unbroken series of epidemics, a progressive deterioration in the physique of the working population?’

What else can be expected unless, in memory of our friend and comrade Amit Sengupta and so many others, we fight to build a better world.

Please visit our website to find our earlier newsletter as well as our dossiers, working documents and other material. 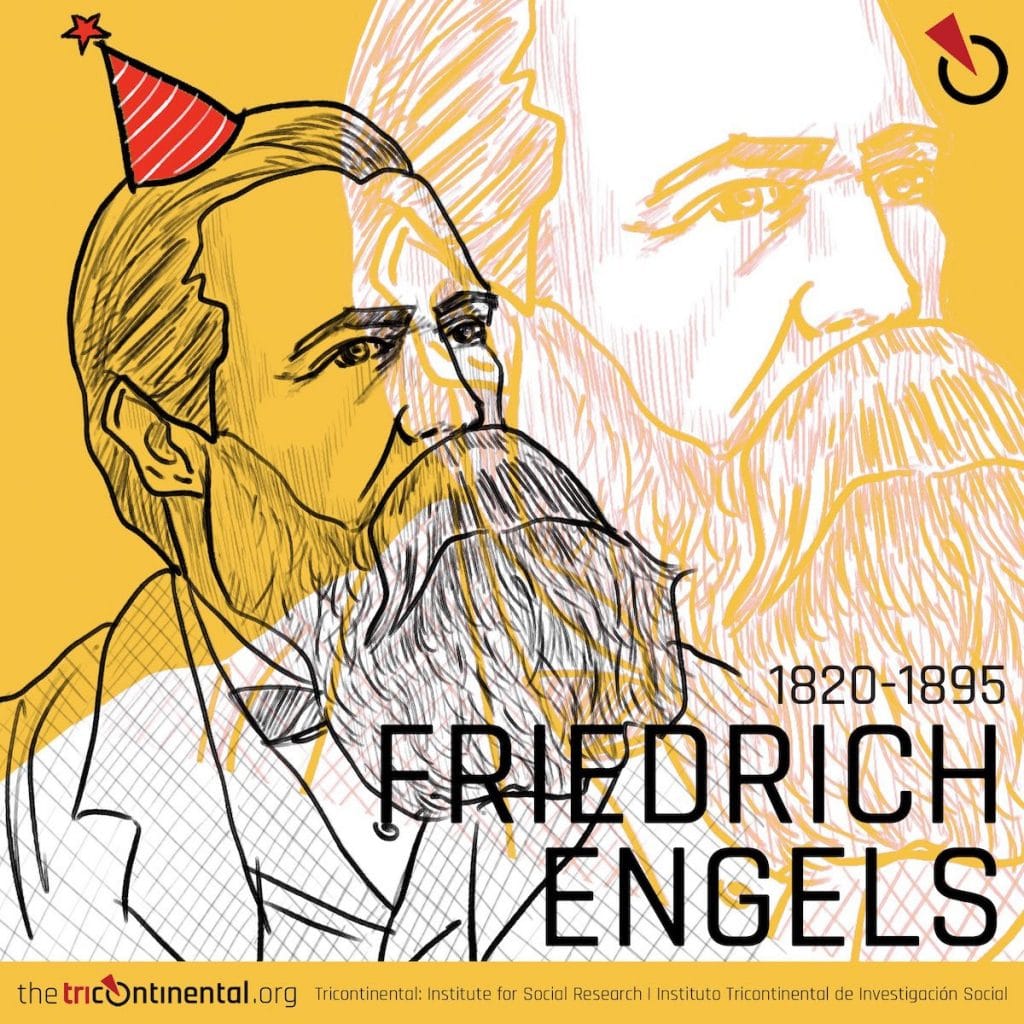