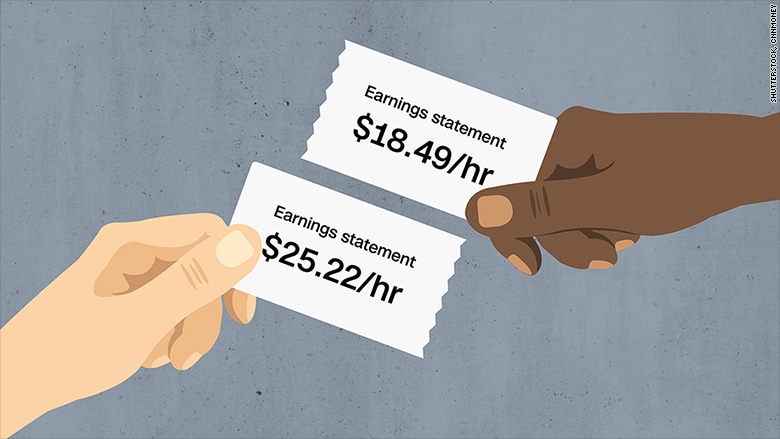 The historically low black unemployment rate is one of Donald Trump’s favorite applause lines. Even Reuters [ht: ja] declares that Trump is right.

It doesn’t seem to matter that most of the decline in the unemployment rate for African American workers (from a high of 16.5 percent in the beginning of 2010 to a low of 6.3 percent today) occurred before Trump was ever elected.

What does matter is that, even as the rate has dropped (the purple line in the chart above), black workers’ pay (the green line) has barely changed. After falling precipitously (by 10 percent, from the end of 2009 to the middle of 2015), it has only increased slightly (by 3.8 percent). Overall, the real wages of black workers have actually declined (by 6.5 percent, between the end of 2009 to today).

White workers have suffered much the same fate. While the unemployment rate (the red line in the chart above) has declined dramatically (from a high of 9.1 percent at the end of 2009 to 3.4 percent today), white workers’ real wages (the blue line) have been stagnant—rising by only 1.4 percent (from the beginning of 2009 to today).

Today, black workers are earning $19 less per week (compared to their peak at the end of 2009), while white workers take home only $5 more per week (from their peak in the beginning of 2009)—even though the unemployment rate for both groups of workers has reached historically low levels.

Meanwhile, the real beneficiaries of the current recovery—under both Trump and his predecessor—have been the employers of those workers, black as well as white. U.S. corporate profits continue to reach new historical records (soaring 172 percent from their low at the end of 2008, and 35.8 percent overall since the end of 2006).

American corporations are only too happy to hire workers, regardless of race or ethnicity, as long as their profits grow.*

In the end, that’s Trump’s real gift—to use everything in his power to direct attention away from the fact that all workers are being left behind.

*And when corporations decide they can’t make enough profits by hiring American workers, they lay them off and relocate production elsewhere. That’s what General Motors just did, eliminating 15 percent of its salaried workforce—destroying some 14,000 jobs—and halting production at five of its North American auto plants. As Christopher Ingraham explains,