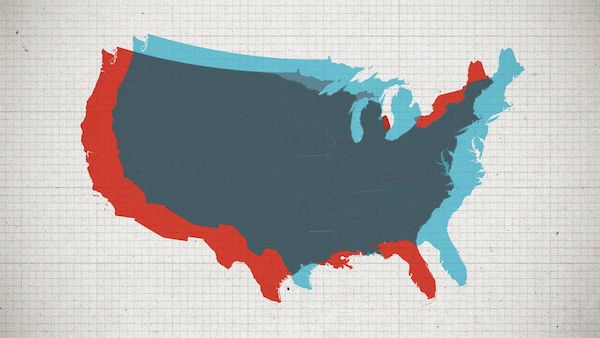 U.S. elected leaders, and those that work for them, think their constituents are far more conservative than they are. The good news is that this means there is far more support for a progressive political agenda than one might think. The bad news is that without sustained popular activism it is doubtful that elected leaders will change their policies accordingly.

The misinformed views of those running for state office

In August 2012, David E. Broockman and Christopher Skovron, surveyed candidates running for state legislative offices across the U.S. They asked them their own positions and to estimate their constituents’ positions on same-sex marriage and universal health care. Then, they compared candidate estimates with their constituents’ responses to questions on those issues that were included in a large national survey.

They found that “politicians consistently and substantially overestimated support for conservative positions among their constituents on these issues.” More specifically:

The figure below illustrates their results. Each scatter point represents a different district and shows the candidate estimate of district support for the issue in question and the actual surveyed district support for that issue. Districts where the candidate accurately estimated the district position would be positioned along the linear grey line. As we can see, both the blue line representing liberal politicans and the red line representing conservative ones lie beneath the grey line, showing that district residents are far more favorable to both these two issues then either liberal or conservative politicians think. 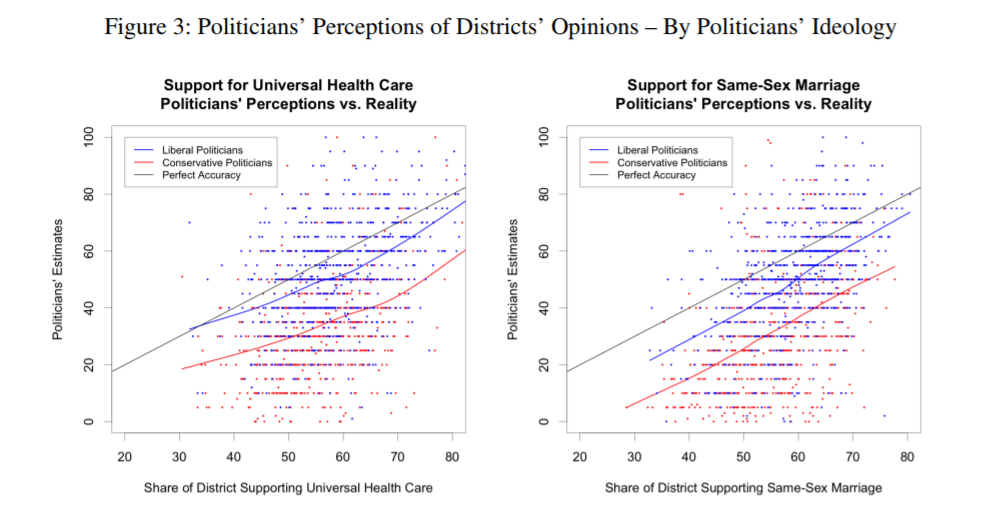 Perhaps not surprisingly, when Broockman and Skovron resurveyed the politicians in November, they found that “politicians’ perceptions of public opinion after the campaign and the election itself look identical to their perceptions prior to these events, with little evidence that their misperceptions had been corrected.”

They did another survey in 2014 of the views and perceptions of state legislative candidates and office holders, this time asking about more issues, including ones dealing with gay and lesbian marriage, gun control, the right to abortion, and the legalization of illegal immigrants. Once again they found that:

It’s no better at the federal level

Alexander Hertel-Fernandez, Matto Mildenberger and Leah C. Stokes did a similar study on the federal level. In 2016 they surveyed the top legislative staffers of every House and Senate member, asking them to estimate their constituents’ support for repealing Obamacare, regulating carbon dioxide, making a $305 billion investment in infrastructure, mandating universal background checks for firearm purchases, and raising the federal minimum wage to $12 an hour. Then, they compared their estimates to district or state-level survey results.

They summarized their findings in a New York Times op-ed as follows:

if we took a group of people who reflected the makeup of America and asked them whether they supported background checks for gun sales, nine out of 10 would say yes. But congressional aides guessed as few as one in 10 citizens in their district or state favored the policy. Shockingly, 92 percent of the staff members we surveyed underestimated support in their district or state for background checks, including all Republican aides and over 85 percent of Democratic aides.

The same is true for the four other issues we looked at . . . . On climate change, the average aide thought only a minority of his or her district wanted action, when in truth a majority supported regulating carbon.

Below is a visual summary of their results. 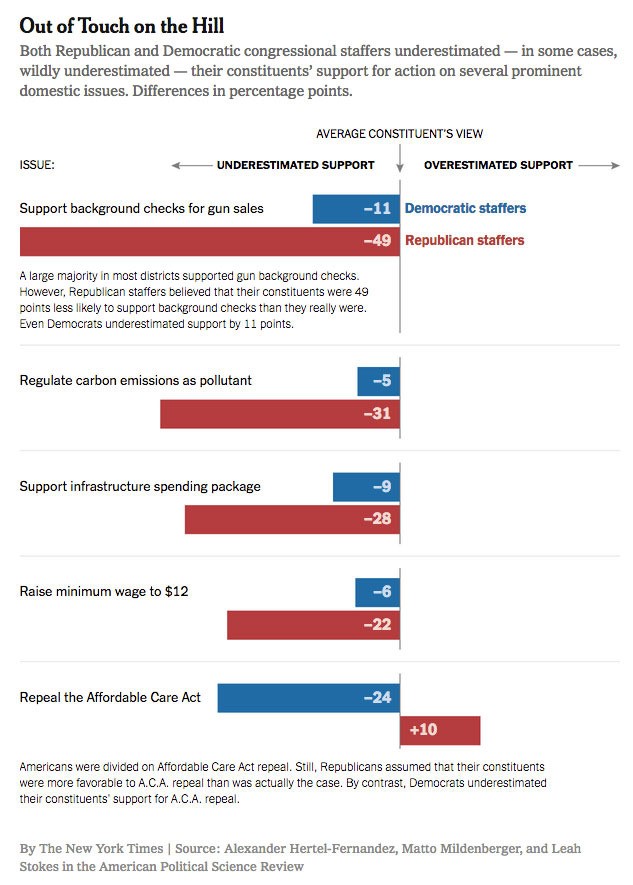 The authors also found corporate lobbying to be an important cause of this misrepresentation of public opinion. As Hertel-Fernandez, Mildenberger, and Stokes explain:

Aides who reported meeting with groups representing big business—like the United States Chamber of Commerce or the American Petroleum Institute—were more likely to get their constituents’ opinions wrong compared with staffers who reported meeting with mass membership groups that represented ordinary Americans, like the Sierra Club or labor unions. The same pattern holds for campaign contributions: The more that offices get support from fossil fuel companies over environmental groups, the more they underestimate state-or district-level support for climate action.

And it appears that corporate influence may have more to do with campaign contributions than the quality of corporate arguments. As Eric Levitz, discussing the work in the Intelligencer, points out, “The study . . . found that ‘45 percent of senior legislative staffers report having changed their opinion about legislation after a group gave their Member a campaign contribution’—and that 62 percent of staffers believe that ‘correspondence from businesses’ are ‘more representative of their constituents’ preferences than correspondence from ordinary constituents.’”

None of this means that we should abandon electoral work. But it does make clear that simply working to elect “good” people, and hoping for the best, will only continue the country’s rightwing drift. There are real forces at work encouraging elected leaders to create their own realities favorable to rightwing positions, including the willingness of conservatives to aggressively and regularly communicate their views to their representatives and, no doubt more importantly, corporate lobbying backed by financial contributions and a careful monitoring of votes.

We can overcome these forces, but only if we build strong popular movements that are able to organize and mobilize people to fight for the things we want, thereby shifting the terms of political debate and the consciousness of politicians in the process. And, back to the good news: the studies above show that popular sentiment is far more receptive to progressive change than we might think from recent election outcomes and government policy.