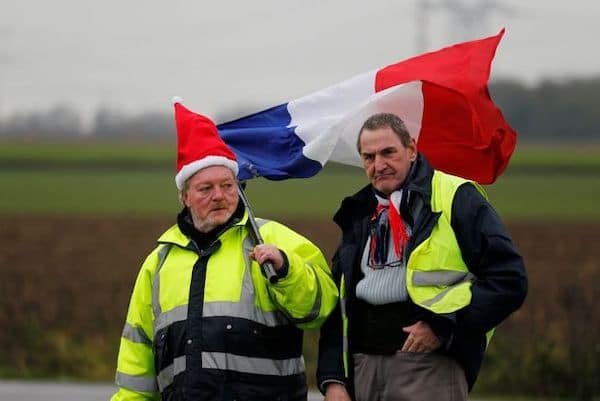 In his brief Dec. 10 television address, French President Emmanuel Macron outlined the measures aimed at calming the popular anger of the “Yellow Vests”: 1) the pay of workers receiving the minimum wage (SMIC) would increase by “100 euros per month” starting January 2019; 2) a bonus “which will have no tax or charge” would be paid at the end of 2018 by “all employers who can”; 3) the payment of overtime would again be tax-free; and 4) the increase in the general social security tax (CSG) would be canceled in 2019 for retirees receiving less than 2,000 euros ($2,268) a month.

Despite the brevity and technicality of the remarks, it didn’t take the French very long to calculate what they were going to gain in this case: almost nothing! The president performed one of his theater scenes—for which his spouse [an acting teacher] has been training him since he was 16 years old.

However, this communication included a hypocritical solo in a guilty tone, something to which Macron, usually so scornful, had not accustomed his fellow citizens. Presidential arrogance decreased in tone, but not his incredible talent for sleight of hand!

Between threats of increased repression and overplayed compassion, Macron the magician pulled out of his hat a thin bouquet of faded flowers: four measuring spoons that made the French look like beggars and served as a pretext for the dominant media to shout out for an end to the mobilization of Yellow Vests.

This false generosity of a “president who listens to the French” is therefore in the end nothing more than a hidden deepening of the logic of neoliberal austerity. Private sector wages are still not rising, civil servants’ salaries remain frozen, unemployment benefits continue to be cut.

Basically, who are the “great forgotten” in the presidential speech? The rich! Big business and stock shareholders are rubbing their hands: No new contributions will be asked of them. The wealth tax is not restored!

The torrents of public money offered as gifts to transnational corporations through the “tax credit for competition and employment” (CICE), without any guarantee of productive investment or job creation, are not slowed down! And the “reforms” of the destruction of State and public services, pension systems, social protection of citizens … are not being challenged!

Three days before the president’s announcements, the French Senate had voted to reduce the “exit-tax,” a mechanism for taxing unrealized capital gains when wealthy taxpayers transfer to their home outside France in order to benefit from more advantageous taxation abroad.

And just three days after the speech on Dec. 10, the management of the Ford automotive group confirmed its decision to close its Blanquefort plant, on the outskirts of Bordeaux, and to lay off more than 850 workers—who had accepted wage cuts in recent years to, they were told, “save the company.” Everything has changed so that nothing changes.

What reasons would there be for the Yellow Vests and all the workers to stop  fighting? On Dec. 14, a day of action, strikes and demonstrations organized at the call of the CGT (General Confederation of Labor), FO (Workers’ Force), FSU (Unitary Trade Union Federation) and Union Syndicale Solidaires (of which SUD [Democratic Unitary Solidarity] is a member) drew thousands of people in Paris and several other large cities in France to support the immediate increase of wages and pensions, and the defense of social protection. Contingents from high schools joined the protest.

The next day, Dec. 15, was “Act V” of the Yellow Vests’ mobilization. It took place in a particular context: that of a terrorist attack which occurred a few days earlier in the streets of Strasbourg, killing five people and imposing a moment of meditation in the country—and the postponement of a motion of censure presented by the left against the government in the National Assembly.

The Macronian regime responded to the fifth demonstration of the Yellow Vests like a circus tamer trains a beast: by beating it with a stick and a whip—after the tiny treat [Macron’s speech] given Monday evening. The deployment of police forces was impressive: one police officer for every demonstrator throughout the country. In Paris there were even two police officers per demonstrator. Dozens of Paris metro stations were closed, and searching spots had been set up in train stations and various public places the day before.

Some 168 arrests were made in the capital, and 115 people were put in police custody. That evening, the social networks of the Yellow Vests were already inviting us to an “Act VI” on Saturday, Dec. 22, to “prepare for Christmas Eve in Paris” and “the victory of the people.”