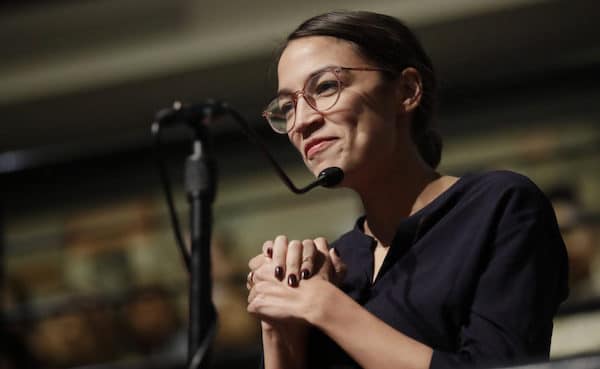 With what author and activist Naomi Klein calls “galloping momentum,” the “Green New Deal” promoted by Rep.-elect Alexandria Ocasio-Cortez, D-N.Y., appears to be forging a political pathway for solving all of the ills of society and the planet in one fell swoop. Her plan would give a House select committee “a mandate that connects the dots” between energy, transportation, housing, health care, living wages, a jobs guarantee and more. But even to critics on the left, it is merely political theater, because “everyone knows” a program of that scope cannot be funded without a massive redistribution of wealth and slashing of other programs (notably the military), which is not politically feasible.

That may be the case, but Ocasio-Cortez and the 22 representatives joining her in calling for a select committee also are proposing a novel way to fund the program, one that could actually work. The resolution says funding will come primarily from the federal government, “using a combination of the Federal Reserve, a new public bank or system of regional and specialized public banks, public venture funds and such other vehicles or structures that the select committee deems appropriate, in order to ensure that interest and other investment returns generated from public investments made in connection with the Plan will be returned to the treasury, reduce taxpayer burden and allow for more investment.”

A network of public banks could fund the Green New Deal in the same way President Franklin Roosevelt funded the original New Deal. At a time when the banks were bankrupt, he used the publicly owned Reconstruction Finance Corp. as a public infrastructure bank. The Federal Reserve could also fund any program Congress wanted, if mandated to do so. Congress wrote the Federal Reserve Act and can amend it. Or the Treasury itself could do it, without the need to even change any laws. The Constitution authorizes Congress to “coin money” and “regulate the value thereof,” and that power has been delegated to the Treasury. It could mint a few trillion-dollar platinum coins, put them in its bank account and start writing checks against them. What stops legislators from exercising those constitutional powers is simply that “everyone knows” Zimbabwe-style hyperinflation will result. But will it? Compelling historical precedent shows that this need not be the case.

Michael Hudson, professor of economics at the University of Missouri-Kansas City, has studied the hyperinflation question extensively. He writes that disasters such as Zimbabwe’s fiscal troubles were not due to the government printing money to stimulate the economy. Rather, “Every hyperinflation in history has been caused by foreign debt service collapsing the exchange rate. The problem almost always has resulted from wartime foreign currency strains, not domestic spending.”

As long as workers and materials are available and the money is added in a way that reaches consumers, adding money will create the demand necessary to prompt producers to create more supply. Supply and demand will rise together and prices will remain stable. The reverse is also true. If demand (money) is not increased, supply and gross domestic product (GDP) will not go up. New demand needs to precede new supply.

The Public Bank Option: The Precedent of Roosevelt’s New Deal

Infrastructure projects of the sort proposed in the Green New Deal are “self-funding,” generating resources and fees that can repay the loans. For these loans, advancing funds through a network of publicly owned banks would not require taxpayer money and could actually generate a profit for the government. That was how the original New Deal rebuilt the country in the 1930s at a time when the economy was desperately short of money.

The publicly owned Reconstruction Finance Corp. (RFC) was a remarkable publicly owned credit machine that allowed the government to finance the New Deal and World War II without turning to Congress or the taxpayers for appropriations. First instituted in 1932 by President Herbert Hoover, the RFC was not called an infrastructure bank and was not even a bank, but it served the same basic functions. It was continually enlarged and modified by Roosevelt to meet the crisis of the times, until it became America’s largest corporation and the world’s largest financial organization. Its semi-independent status let it work quickly, allowing New Deal agencies to be financed as the need arose.

The Reconstruction Finance Corp. Act of 1932 provided the financial organization with capital stock of $500 million and the authority to extend credit up to $1.5 billion (subsequently increased several times). The initial capital came from a stock sale to the U.S. Treasury. With those resources, from 1932 to 1957 the RFC loaned or invested more than $40 billion. A small part of this came from its initial capitalization. The rest was borrowed, chiefly from the government itself. Bonds were sold to the Treasury, some of which were then sold to the public, although most were held by the Treasury. All in all, the RFC ended up borrowing a total of $51.3 billion from the Treasury and $3.1 billion from the public.

In this arrangement, the Treasury was therefore the lender, not the borrower. As the self-funding loans were repaid, so were the bonds that were sold to the Treasury, leaving the RFC with a net profit. The financial organization was the lender for thousands of infrastructure and small-business projects that revitalized the economy, and these loans produced a total net income of $690,017,232 on the RFC’s “normal” lending functions (omitting such things as extraordinary grants for wartime). The RFC financed roads, bridges, dams, post offices, universities, electrical power, mortgages, farms and much more, and it funded all this while generating income for the government.

The Central Bank Option: How Japan Is Funding Abenomics with Quantitative Easing

The Federal Reserve is another Green New Deal funding option. The Fed showed what it can do with “quantitative easing” when it created the funds to buy $2.46 trillion in federal debt and $1.77 trillion in mortgage-backed securities, all without inflating consumer prices. The Fed could use the same tool to buy bonds earmarked for a Green New Deal, and because it returns its profits to the Treasury after deducting its costs, the bonds would be nearly interest-free. If they were rolled over from year to year, the government, in effect, would be issuing new money.

This is not just theory. Japan is actually doing it, without creating even the modest 2 percent inflation the government is aiming for. “Abenomics,” the economic agenda of Japan’s Prime Minister Shinzo Abe, combines central bank quantitative easing with fiscal stimulus (large-scale increases in government spending). Since Abe came into power in 2012, Japan has seen steady economic growth, and its unemployment rate has fallen by nearly half, yet inflation remains very low, at 0.7 percent. Social Security-related expenses accounted for 55 percent of general expenditure in Japan’s 2018 federal budget, and a universal health care insurance system is maintained for all citizens. Nominal GDP is up 11 percent since the end of the first quarter of 2013, a much better record than during the prior two decades of Japanese stagnation, and the Nikkei stock market is at levels not seen since the early 1990s, driven by improved company earnings. Growth remains below targeted levels, but according to Financial Times, this is because fiscal stimulus has actually been too small. While spending with the left hand, the government has been taking the money back with the right, increasing the sales tax from 5 percent to 8 percent.

Abenomics has been declared a success even by the once-critical International Monetary Fund. After Abe crushed his opponents in 2017, Noah Smith wrote in Bloomberg, “Japan’s long-ruling Liberal Democratic Party has figured out a novel and interesting way to stay in power—govern pragmatically, focus on the economy and give people what they want.” Smith said everyone who wanted a job had one, small and midsize businesses were doing well; and the Bank of Japan’s unprecedented program of monetary easing had provided easy credit for corporate restructuring without generating inflation. Abe had also vowed to make both preschool and college free.

Not that all is idyllic in Japan. Forty percent of Japanese workers lack secure full-time employment and adequate pensions. But the point underscored here is that large-scale digital money-printing by the central bank to buy back the government’s debt, combined with fiscal stimulus by the government (spending on “what the people want”), has not inflated Japanese prices, the alleged concern preventing other countries from doing the same.

Abe’s novel economic program has done more than just stimulate growth. By selling its debt to its own central bank, which returns the interest to the government, the Japanese government has, in effect, been canceling its debt. Until recently, it was doing this at the rate of a whopping $720 billion per year. According to fund manager Eric Lonergan in a February 2017 article:

The Bank of Japan is in the process of owning most of the outstanding government debt of Japan (it currently owns around 40%). BOJ holdings are part of the consolidated government balance sheet. So its holdings are in fact the accounting equivalent of a debt cancellation. If I buy back my own mortgage, I don’t have a mortgage.

If the Federal Reserve followed suit and bought 40 percent of the U.S. national debt, it would be holding $8 trillion in federal securities, three times its current holdings from its quantitative easing programs. Yet liquidating a full 40 percent of Japan’s government debt has not triggered price inflation.

Filling the Gap Between Wages, Debt and GDP

Rather than stepping up its bond-buying, the Federal Reserve is now bent on “quantitative tightening,” raising interest rates and reducing the money supply by selling its bonds into the market in anticipation of “full employment” driving up prices. “Full employment” is considered to be 4.7 percent unemployment, taking into account the “natural rate of unemployment” of people between jobs or voluntarily out of work. But the economy has now hit that level and prices are not in the danger zone, despite nearly 10 years of “accommodative” monetary policy. In fact, the economy is not near true full employment nor full productive capacity, with GDP remaining well below both the long-run trend and the level predicted by forecasters a decade ago. In 2016, real per capita GDP was 10 percent below the 2006 forecast of the Congressional Budget Office, and it shows no signs of returning to the predicted level.

In 2017, U.S. GDP was $19.4 trillion. Assuming that sum is 10 percent below full productive capacity, the money circulating in the economy needs to be increased by another $2 trillion to create the demand to bring it up to full capacity. That means $2 trillion could be injected into the economy every year without creating price inflation. New supply would just be generated to meet the new demand, bringing GDP to full capacity while keeping prices stable.

This annual injection of new money can not only be done without creating price inflation, it actually needs to be done to reverse the massive debt bubble now threatening to propel the economy into another Great Recession. Moreover, the money can be added in such a way that the net effect will not be to increase the money supply. Virtually our entire money supply is created by banks as loans, and any money used to pay down those loans will be extinguished along with the debt. Other money will be extinguished when it returns to the government in the form of taxes. The mechanics of that process, and what could be done with another $2 trillion injected directly into the economy yearly, will be explored in Part 2 of this article.