The outlandish “Russian interference” narrative just took a turn from the banal to blatantly disrespectful. For the past two years, the punditry on the supposed left have been peddling the lie that the thousands of dollars spent on Facebook and Google ads—purportedly at the behest of Putin—had more impact on the outcome of the 2016 elections than the billions of dollars that were unleashed by corporations, lobbyists and the dark moneyed oligarchs.

This morning, the New York Times decided to stop insulting our intelligence and instead chose to insult decency. According to the article written by Scott Shane and Sheera Frenkel, Russians allegedly unleashed an intricate plot targeting African-Americans in order to foment discontent and dupe “black people” to vote against their self-interest. The corporate recorders at the Times would have us believe that the reason African-Americans did not uniformly vote for Hillary Clinton and the Democrats is because they were too dimwitted to think for themselves and were subsequently manipulated by foreign agents. This yellow press drivel is nothing more than propaganda that could have been written by George Wallace.

Sure enough, within short order, the “liberal” establishment latched on to this pathetic and racist storyline to feign shock and dismay that Trump and his allies took advantage of the weak and vulnerable. With rank paternalism and bigotry worthy of David Duke, these supposed progressives are inferring that we can’t think for ourselves and that only they can act on our behalf. We are “their Negroes” and if we are not walking in lock step with Democrats, it’s not because we are critical thinkers but because we are fragile people who need to be spoken for. 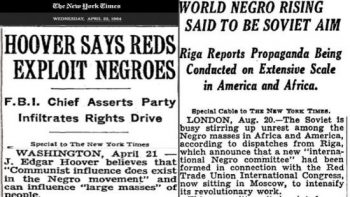 The insidious undertones of the New York Times article is straight out of the COINTELPRO playbook that was deployed during the Civil Rights Era to dismiss the frustrations of African-Americans. J. Edgar Hoover would have been proud of Scott, Sheera and the editors at “the Grey Lady”, after all he used the same feigned concerns for “black folks” to smear anyone who dared to speak against a repressive system of racism that was bludgeoning the masses from Selma to Boston and beyond. The insinuation back then was that “Negroes” were protesting because of Soviet influence, surely it had nothing to do with the fire hoses, German Shepherds and horse hooves that were being deployed to segregate people in their place. The more things change, the more they stay the same. Once again, the New York Times dusts of their blueprint from the past while Democrats channel their inner Joseph McCarthy.

Let me dispel some myths here about people who refused to vote for Hillary since I happen to be one of them. I chose to withhold my support not because Russians conditioned me to think that way but because I refused to support a warmongering sociopath otherwise known as John McCain in pantsuits. I’ve followed Hillary’s career long enough to know that she is a corporate courtesan who can’t get enough of destabilizing nations and enriching herself by trading access for cash. Furthermore, eight years of Obama catering to Wall Street and enhancing George Bush’s war first policies was enough for me to tap out.

In other words, just because my skin color is “black” does not mean I owe my vote and loyalty to Democrats. Parenthetically, if you want to know why I use quote marks around the word black and finally have an adult conversation about race in America, refer to the video embedded at the bottom of this article. True enough, there was a time where I was an unflinching supporter of team blue, but after realizing how Democrats are no different than Republicans, I chose to wake up. I know some vacuous voices like Jake Tapper and Amy Siskind think that I’ve arrived at this conclusion because I’ve been brainwashed by Russians, but rest assured that I am not some dunce who is prone to be hoodwinked by anybody.

We are giving up on these two bankrupt parties because we’ve had enough of choosing between clowns and sock puppets, we don’t need Russians to remind us of this.

The level of duplicity on display by establishment voices is truly astounding. If leading Democrats and media personalities want to know who is responsible for the rise of Trump, they should look in the mirror. After all, it was Hillary Clinton’s “pied piper” strategy—heeded by her sycophants in the press—that elevated a reality show clown into a serious contender. Hillary Clinton and her cronies rigged the primaries, spent more than $1.2 billion and Trump was given more than a billion dollars in free media by CNN, MSNBC and their ilk, yet we are supposed to believe that $5,000 in Google ads and $50,000 on Facebook was enough to tilt the outcome of the 2016 elections.

To be honest, this entire Russian farce is not only insulting to African-Americans but to every American. Our elections have been subverted a long time ago, the lesser of two evils a Democracy does not make. The Democrat and Republican Parties are wholly owned subsidiaries of the military-financial racket, they give us platitudes and rhetoric while policies are reserved for the richest 1%. Russians did not undermine our elections, Citizens United and the billions of unaccounted dollars did that long before 2016. Mainstream media “journalists” would write about this and speak up against this cancer that eats away at our Republic if they too were not muzzled by the paychecks they are getting from their corporate overlords.

The article’s main author is living proof of how fraudulent this entire episode is. What you are about to read next will make you shake your head in disbelief as you ponder the lows to which mainstream media “journalists” have sunk. You see, Scott Shane was the very same “reporter” who was implicated by Wikileaks in 2016 for passing along Cablegate’s sensitive dossier to Hillary Clinton’s State Department. He sent an email to Philip Crowley, then Hillary’s undersecretary, not to hold his feet to the fire and speak truth to power but to give Team Hillary enough time to concoct their spin on a damaging story. The line between press, government and corporation is non-existent; all three intersect to form a troika of perjurers and disinformation artists.

Here is a radical idea, instead of pointing fingers, how about our national leaders fix the issues that have most Americans up in arms? If someone wants to stop being called a thief, perhaps they should stop robbing banks. In that same vein, perhaps Democrats should not have run a candidate in 2016 that had the likability of herpes and the relatability of Rasputin. Maybe more Americans would have faith in our government if elected officials spent as much time listening to us as they do chasing headlines and donations. Alas, it is easier to displace and blame than it is to act like adults and lead.

For the record, the fact that Russia tried to influence the outcome of our election in 2016 is not news, they have been trying to do that for decades. This is the reality of geopolitics, every nation in one shape or another tries to exert influence in the dealings of other nations. Here is a little breaking news, we too have been and continue to meddle in Russia’s affairs— perhaps we should stop throwing boulders before we accuse others of casting stones. Besides, if we really are concerned about outsiders hijacking our elections, Russia’s leverage pales in comparison to the power some nations and corporate-states have over our elected officials.

For the record, just because I did not vote for Hillary Clinton does not mean I voted for Trump. It is sad that I even have to stipulate this, but we have been so conditioned to see politics through binaries that people assume that you can only see blue or red. Though one would be forgiven for thinking different, the truth is that a vast majority of Americans don’t identify with either party—more and more people are walking away from these two equally malicious parties. I write this not because I’m under the spell of foreign actors but because I am a free thinking American. I do not owe my vote to Democrats or Republicans, they will either earn my support or they can go to hell. That makes me independent, toadies in mainstream media call people like me Russian bots.

Half a truth is often a great lie.
~ Benjamin Franklin

Teodrose Fikre is the editor and founder of the Ghion Journal. A published author and prolific writer, a once defense consultant was profoundly changed by a two year journey of hardship and struggle.

*As noted above, though the title of this video can be jarring at first, watch this video to get a discussion about race and identity in America that is rarely had by establishment figures who would rather we remain stuck in the scars of the past.