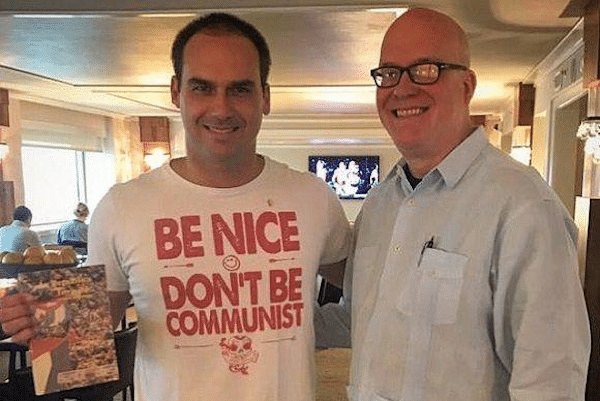 It would be naive to believe that Jair Bolsonaro’s assault on Cuban doctors, forcing their departure from Brazil, is not part of a larger plan, details of which are coming to light, even though he has yet to assume the Presidency.

It is already clear how far he is willing to go with his intrigues against the island that saved the lives of thousands of his compatriots, serving millions with meticulous professionalism.

Bolsonaro has his eyes on Washington and the Trump administration, which is looking to the Jair-Eduardo pair, father and son, to facilitate its campaigns Cuba and Venezuela.

Every day a new link appears, including the effusive meeting of Jair with National Security Adviser John Bolton, where the main theme was Venezuela and Cuba-and not precisely to recognize the achievements of both nations in health, education, labor, and other areas with direct impact on the population, or their proven solidarity.

In Miami, the new President’s son, Eduardo Bolsonaro, held a friendly meeting with Orlando Gutierrez, one of the most rabid representatives of the Cuban-American mafia, linked to terrorists and salaried employees of the USAID. He is the central leader of efforts to oppose even the slightest move to improve relations between Cuba and the United States, as occurred during the Obama administration.

To leave a graphic record of his position during this visit, Eduardo Bolsonaro posed before the cameras with this Cuban-born terrorist.

The left united and created a bloody dictatorship in Cuba. It’s time to unite to get rid of the beast they produced.

To show precisely who he is, Bolsonaro Jr. wore a t-shirt bearing this advice: “Be nice, don’t be communist”.

In the case of the host, in the name of the so-called Assembly of Cuban Resistance, Gutiérrez has recently led campaigns opposing cruise lines making trips to the island, and calling on the “exile” community to take action to create a new Republic.

This “new Republic” is not explained, but I imagine the plan is to become one more star on the U.S. flag.

Gutiérrez, and other losers who make a living off the miserable business of counterrevolution, sent the Trump administration a message offering thanks for measures taken against Cuba.

This gentleman and other Latin Americans of his lineage have been summoned by the ultra-right deputy, son of the President, Eduardo Bolsonaro, to what they call a “Conservative Summit of the Americas,” that took place this December 8, in Foz de Iguazú, located on the triple border between Brazil, Argentina, and Paraguay. Among the confirmed participants were José Antonio Kast, the right-winger who won 8% of the votes in Chile’s Presidential elections; Orlando Gutiérrez, on behalf of the Cuban-American Miami mafia; Jorge Jérez Cuéllar, Colombian reserve general; and Venezuelan opposition leader, Miguel Ángel Martín. Former Colombian President Álvaro Uribe was also invited.

If Jair Bolsonaro and his son Eduardo have fostered alliances with people like Orlando Gutiérrez and other terrorists in the United States, how can we believe that the campaign against Cuban doctors in Brazil was solely an initiative of that country’s President-elect and not part of Washington’s plans to attack Cuba and Venezuela?