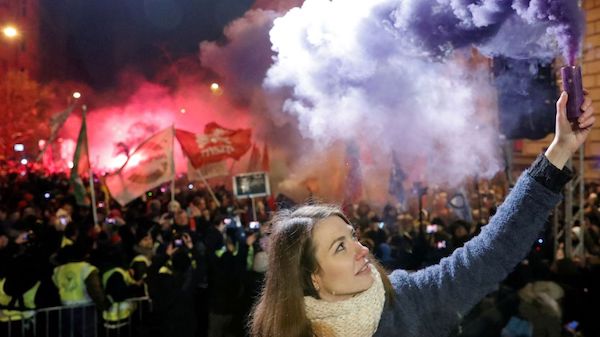 On December 12, the far-right government of Viktor Orbán in Hungary passed a law in parliament, permitting employers to make employees to work for 400 hours of overtime a year. The law also extended  the time frame for giving overtime pay to three years. The provision, which was quickly dubbed as a ‘slave law’ by activists and unions, sparked massive protests with thousands hitting the streets. A massive strike has been planned in January 2019. Peoples Dispatch spoke to Guzslován Gábor of the Federation of Metal Workers Union of Hungary on the new law and the protests that have rocked the country.

PD: Why do you call the new labor legislation in Hungary as the “slave law”?

GG: At the beginning of its rule, the Orbán regime came up with a ‘regularization’ of the Strike Law. Later, a Work Law Book was introduced in 2012. They rewrote all the rules regarding work and these were highly unfriendly to the employees, limiting the rights of workers and of course, the possibility of unionization. The current ‘Slave Law’ marks a further tightening of that Work Law Book and is the last straw for people, workers and trade unions. The situation has become worse because the employers have got new legal tools to make work time flexible and generate more overtime. We have reached an unbearable level of vulnerability. The time for rest and the time we get to spend with our children has come down. Companies are able to avoid paying overtime costs too. It’s especially cynical that this law was passed in 2018, which the government had designated as the ‘Year of the families.’

PD: What do you think prompted the government to pass such a law?

GG: The foreign minister, Peter Szijjarto, recently said, “As a result of the challenges caused by low unemployment in Hungary, companies have long been asking the government to ensure sufficient workforce for carrying out their investment projects.”

Now, with this law, companies can unilaterally decide on longer work weeks to complete orders if there is a high demand. Later, if the orders decrease, or during a crisis, the companies can prescribe (non-paid) rest periods. If the average work time is normal (and this is possible in a 3-year period), then there is no overtime bonus for workers, just unequal work periods. So, the risk of the market, world economy and the success of the product–all fall on the shoulders of the workers rather than the companies.

PD:How will the legislation affect the workers in general and your sector in particular? What are their responses?

GG: Most of the workers do a lot of overtime now. There is labor shortage and a lot of substitutions. People are already overburdened. Thus, they are able to see the direct impact of this law. In my own sector, there is better trade union penetration than in other sectors. The tendency to strike has been traditionally low in Hungary but things are changing now

PD:What is the way forward for the protests and the parties involved in it?

GG: Everyone involved sees that there is an opportunity and a need to confront the government decisively on this issue even as it resists these protests strongly. Protests, including road blockades, are taking place across the country on a daily basis. The confederation of trade unions has planned a general strike for January, 2019.

There is no other way but strikes. In Hungary, the political system is strong. The governing party, Fidesz, has strong mandate. B ut public opinion is on the side of the trade unions on this issue. The trade unions have been traditionally weak and have only a few members. Hitherto, only three-four strikes have been held every year. But this mobilization provides a chance to change the situation, especially with the involvement of the unions in the automobile sector, which is more organized than other parts of the workforce.