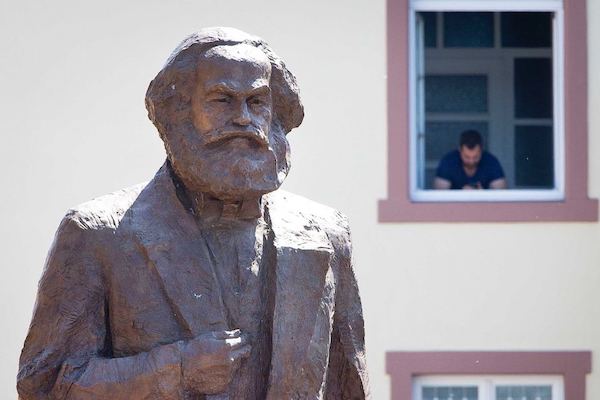 Yesterday I had a conversation about my work, about how and why I started studying inequality more than 30 years ago, what was my motivation, how it was  to work on income inequality in an officially classless (and non-democratic) society, did the World Bank care about inequality etc. The interviewer and I thus came to some methodological issues and to the inescapable influence of Marx on my work. I want to present it more systematically in this post.

The most important of Marx’s influences on people working in social sciences is, I think, his economic interpretation of history. This has become so much part of the mainstream that we do no  longer associate it with Marx very much. And surely, he was not the only one or even the first to have defined it. But he applied it most consistently and most creatively.

Even when we believe that such an interpretation of history is common-place today, this still is not entirely so. Take the current dispute about the reasons that brought Trump to power. Some (mostly those who believe that everything that went on previously was fine) blame a sudden outburst of xenophobia, hatred, and misogyny. Others (like myself) see that outburst as having been caused by long economic stagnation of middle class incomes, and rising insecurity (of jobs, health care expenses, inability to pay for children’s education). So the latter group tends to place economic factors first and to explain how they led to racism and the rest. There is a big difference between the two approaches—not only in their diagnosis of the causes but more importantly in their view of what needs to be done.

The second Marx’s insight which I think is absolutely indispensable in the work on income and wealth inequality is to see that economic forces that influence historical developments do so through “large groups of people who differ in their position in the process of production”, namely through social classes. The classes can be defined by the difference in the access to the means of production as Marx insisted but not only by that. Going back to my work in socialist economies, there was a very influential left-wing critique of socialist systems  which held that social classes in that system were formed on the basis of differential access to state power. Bureaucracy can indeed be seen as a social class. And not only under socialism, but also in pre-capitalist formations where the role of the state as an “extractor of the surplus value” was important, from the ancient Egypt to the medieval Russia. Many African countries today can be usefully analyzed using that particular lens. In my forthcoming “Capitalism, Alone” I use the same approach with respect to the countries of political capitalism, notably China.

But to underline: class analysis is absolutely crucial for all students of inequality precisely because inequality before it becomes an individual phenomenon (“my income is low”) is a social phenomenon that affects large swathes of people (“my income is low because women are discriminated”, or because African Americans are discriminated, or poor people cannot access good education etc.). To give a couple of examples of what I have in mind here: Piketty’s work especially in “Top incomes in France” and Rodriguez Weber’s book on Chilean income distribution  over the long-term (“Desarrollo y desigualdad en Chile (1850–2009): historia de su economía política”). On the other hand, I think that Tony Atkinson’s work on British and various other income and wealth distributions failed to sufficiently integrate political and class analysis.

This is also where the work on inequality parts ways with one of the scourges of modern micro- and macro-economics, the representative agent. The role of the representative agent was to obliterate all meaningful distinctions between large groups  of people whose social positions differ, by focusing on the observation that everybody is an “agent” who tries to maximize income under a set of constraints. This is indeed trivially true. And by being trivially true it disregards the multitude of features that make these “agents” truly different: their wealth, background, power, ability to save, gender, race, ownership of capital or the need to sell labor, access to the state etc. I would thus say that any serious work on inequality must reject the use of representative agent as a way to approach reality. I am very optimistic that this will happen because the representative agent itself was the product of two developments, both currently on the wane: an ideological desire, especially strong in the United States because of the  McCarthy-like pressures to deny the existence of social classes, and the lack of heterogeneous data. For example, median income or income by decile was hard to calculate but GDP per capita was easy to get hold of.

The third extremely important Marx’s methodological contribution is the realization that economic categories are dependent on social formations. What are mere means of production (tools) in an economy composed of small-commodity producers becomes capital in a capitalist economy. But it goes further. The equilibrium (normal) price in a feudal economy, or in a guild system where capital is not allowed to move between the branches will be different from equilibrium prices in a capitalist economy with the free movement of capital. To many economists this is still not obvious. They use today’s capitalist categories for the Roman Empire where wage labor was (to quote Moses Finley) “spasmodic, casual and marginal”.

But even if they do not realize it fully, they de facto acknowledge the importance of institutional set up of a society in determining prices not only of goods but also of the factors of production. Again, we see it daily. Suppose that the world produces exactly the same set of commodities and the demand for them is exactly the same, but it does so within national economies that do not permit movement of capital and labor, and then does it in an entirely globalized economy where borders do not exist. Clearly, the prices of capital and labor (profit and wage) will be different in the latter, the distribution between capital owners and workers will be different, prices will change as profits and wages change, incomes will change too and so will consumption patterns, and ultimately even the structure of production will be altered. Indeed this is what today’s globalization is doing.

The fact that property relations determine prices and structure of production and consumption is an extremely important insight. The historical character of any institutional arrangement is thereby highlighted.

The last among Marx’s contribution that I would like to single out—perhaps the most important and grandiose—is that the succession of socio-economic formations (or more restrictively, of the modes of production) is itself “regulated” by economic forces, including the struggle for the distribution of the economic surplus.  The task of economics is nothing less than global historical: to explain the rise and fall not solely of countries but of different ways of organizing production: why were nomads superseded by the sedentary populations, why did Western Roman Empire break into a few large feudal-like demesnes and serfs, while the Eastern Roman Empire remained populated by small landholders, and the like. Whoever studies Marx can never forget the grandiosity of the questions that are being asked. For such a student then using supply and demand curves to determine the cost of pizza in his town will indeed be acceptable, but surely will never be seen as the prime or the most important role of economics as a social science.