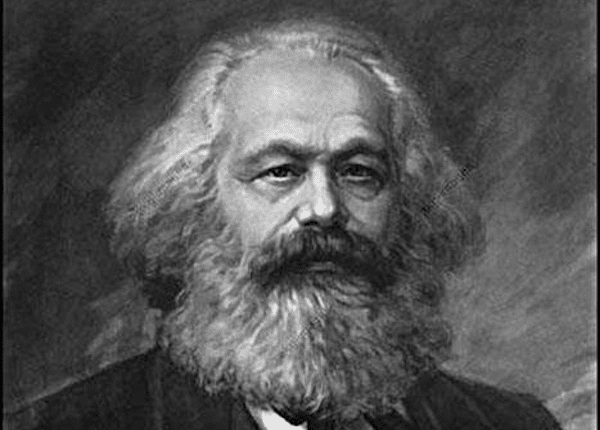 Marx correlates the decrease of Indian textile exports with the monopoly exerted by British muslins to India and the decimation of the population of Dhaka. To quote what he says about the impact of colonization on our city and the outcome of the fatal embrace of British colonial policy in our part of India:

From 1818 to 1836, the export of twist from Great Britain to India rose in proportion of 1 to 5,200. In 1824, the export of British muslins to India hardly amounted to 1,000,000 yards, while in 1837 it surpassed 64,000,000 yards. But at the same time the population of Dacca decreased from 150,000 inhabitants to 20,000. This decline of Indian towns celebrated for their fabrics was by no means the worst consequence. British steam and science uprooted, over the whole surface of Hindoostan, the union between agriculture and manufacturing industry.

In the same article, Marx goes on in an intensely anti-colonial vein to detail the Company’s destruction of the social fabric of India as well as its economic ruin.

In other Tribune pieces, Marx suggests other causes and consequences of the British invasion of India. In “The East India Company –its History and Results”, he emphasizes how the maws of colonialism must always devour new territories. He shows how the English nation, “having simultaneously lost their colonies in North America,” felt “the necessity of elsewhere reigning some great Colonial Empire”, surely an insight of great relevance even now in our age of globalization.

In the series of articles he wrote on the Sepoy Mutiny, Marx emphasizes to his English-speaking readers the atrocities committed by the British army and declares unequivocally that Indian excesses were the inevitable outcome of their colonizers’ bloodthirstiness from the beginning of their rule to the present moment. To him such excesses are nothing but a demonstration of the “rule of historical retribution” in which “its instrument” is “forged not by the offended, but by the offender itself.”

Very few westerners in his time would have had the courage as well as the conviction to castigate the English as much as Marx did. He underscores British distortion of what was going on, caustically pointing out to his readers that “it would be an unmitigated mistake to suppose that all the cruelty is on the side of the sepoys, and all the milk of human kindness flows on the side of the British.” Marx exposes the extent of colonial propaganda and disinformation meted out to the British reading public about Indian excesses circulated by the Company’s one-sided broadcasts. He portrays within the brief compass of newspaper articles the real history of British colonial occupation of the subcontinent, and the actual human costs of the war to Indians as well as to the British. He stresses the British forces’ disproportionately brutal response to the Indian insurrection, so blatantly concealed by Company-fed journalists and politicians in England, and calls attention to the extent of loot and plunder carried out by the British troops after each victory over the rebels.

In the later articles, Marx notes the impending signs of yet another famine in Bengal. He declares that while there had been no famines until then in the nineteenth century, “in former times, and even since the English occupation” they have been “the source of terrible sufferings.” He makes the East India Company and English colonization totally responsible for the Great Bengal Famine of 1770.

Marx is relentless in exposing the way the English continued their attempts to cripple India after the Mutiny in fresh ways. In a July 1858 piece, he rejects British claims of “light taxation” in the subcontinent; in actuality, he says it “crushes the mass of the Indian people to the dust, and… its extraction necessitates a resort to such infamies as torture, for instance.” The bulk of revenue thus gathered, he shows, is spent on the “governing class” of the colony and their backers in England so that they can thrive and indulge themselves there. Marx feels that nothing much would change when Company rule gave way to more direct rule by the British government—one could expect more of the same extortionist, debilitating policies pursued by the colonizers—whether private or public ones.

In short, Marx saw no respite for Indians or the Chinese, until the British Empire crumbled from the nefarious policies pursued by the imperial forces at work. The post-mutiny situation, in his analysis, indicated a lull before another storm, for to him it was only a matter of time for “anti-British passions to flame again.”

Marx was clearly consistently anti-colonial in his writings of India. We should have no doubts in our mind on that account.

Was Marx an Orientalist?

In his 1853 article, “The Future Results of British Rule in India” I had quoted earlier, Marx had stated that the British, the last of the wave of conquerors of India, represented the first one superior to the Indians. It was, he implies, because of this reason they had not only resisted being “Hindooized” (Marx’s emphasis) unlike earlier conquerors, but had also unwittingly laid the foundation for Indian “regeneration….by breaking up the native industry.” In the earlier 1853 piece, “The British Rule in India” once again depicting British rapacity, hard-heartedness and destructive actions, he had claimed that the villages thus destroyed, “idyllic” though they may have seemed, “had always been the solid foundation of Oriental despotism.” Marx goes as far as to claim that England had become the “unconscious tool of history in bringing about the revolution.”

In Orientalism Edward Said brings up the issue of representation and misrepresentation in the discursive tradition he had categorized through the title of his book. In it he associates Marx with writers like “Disraeli, Burton and Nerval: who use words such as “Orient,” “Oriental,” “Oriental Despotism” as if intertextually, to “carry on a lengthy discussion between themselves” through the use of such “generalities.” At one point of Orientalism, Said takes a sustained look at Marx’s characterization of the nature of “Oriental despotism” and the belief that England’s superior civilization would finally force a moribund society to revive after what had seemed till the Company’s conquest of the subcontinent, forever. Said suggests that these instances indicate that even Marx had stereotyped India and Indians. To put it in terms of the central thesis of his book Marx had “Orientalized” it, carrying on in the process “a romantic redemptive project” (“they cannot represent themselves; they must be represented” is the quote from Marx Said uses in this context), rather than considering the people of the subcontinent as “human material.”

Was Marx essentially right in his comments or too Eurocentric and sweeping, as Said implied in Orientalism? Said’s comments on the reductive nature of Marx’s Indian writings have certainly given rise to an ideological storm among Marxists, historians, and postcolonialists. Committed Marxists like Aijaz Ahmed and Irfan Habib believe that the Palestinian-American had misread Marx’s comment. As Ahmed puts it, Said had fashioned “a rhetoric of dismissal” that had “no room for other complexities of Marx’s thought.” As for Habib, the net has his “Critical Notes on Edward Said” where he cites Ahmed approvingly and sets out to further prove as well that, overall, Said’s entire argument in Orientalism is too simplistic and sweeping, and methodologically unsound.

In his very substantial, detailed and solidly and lucidly argued 1992 paper, “Karl Marx, His Theories of Asian Societies, and Colonial Rule” another eminent Indian historian, Bipan Chandra, having evaluated Marx’s writings on British India closely, declares: “Marx and Engels neither studied Asian societies for their own sake—nor had adequate knowledge regarding them.” Chandra suggests that Marx’s early writings on India reveal Marx assuming at that time Asian society as being “stagnant, changeless” and “incapable of change from within”  led to his “understanding of colonialism as performing a “revolutionary” role in India and Asia” in his Indian writings of the early 1850s. He was therefore very much in a western tradition that did believe such things and that had essentialized India and seen it as perennially inert!  Chandra concludes therefore “Marx’s basic notions regarding Indian society were essentially incorrect” for a long time.

Let me wind up my summary of Chandra’s excellent and balanced essay—for he is always respectful of Marx and misses no opportunity to prove that he would have not been so sweeping and essentializing if he had seen the whole picture and that he did change his notions of India eventually—by shifting to Chandra’s concluding lines. He wraps up his discussion there by suggesting that  though “Marx’s overall analysis of Asian societies and colonialism has proved to be inadequate…some of his individual remarks on Asian societies and colonialism contain deep insights” that still have great relevance to students of colonialism and critics of imperialism.

Chandra’s essay helps in taking up a balanced position on Marx vis a vis Said’s critique of him in Orientalism. Marx did to some extent misrepresent India in the Tribune articles he wrote in the early 1850s. However, as he did more research, he changed his views about an Indian society made moribund by “Oriental despotism” to a great extent and would have perhaps revised it completely, had he had facts that came to light later about the dynamics of Indian history over time and the limited impact British rule had in changing India.

Said latched on to the reductive Marx he had come across in those early writings on India. He had attacked Marx not pointlessly or completely unfairly but perhaps was overstating the extent of Marx’s position in the European Orientalist tradition. However, what is wrong in showing that Marx did have his blind spots in envisioning India at one point of his life? For Marx’s indictment of the British presence in India is truly impressive and of lasting value.

On the other hand, Said’s scholarship may have its blind spots as well and he is perhaps guilty of overstating the case against Marx as an orientalist. However, how can his account of Marx’s European misrepresentation and stereotyping be completely overlooked and/or dismissed categorically?

I would like to end by saying that Marx on India is very illuminating and relevant for us, despite the blind spots in his vision. And so is Said on Oreintalism, despite the blind spots he may have about Marx’s position in the Orientalizing tradition. But of course there is no comparing the two. Marx will be celebrated bicentenary after bicentenary for the essential truths he has conveyed about history and society. And Said? Hopefully, he will be remembered as the father of postcolonialism for a long, long time. Certainly, he cannot be dismissed easily even if he is no Marx!

Fakrul Alam is a Bangladeshi academic, writer and translator. Currently, he is the Pro-VC of East-West University.