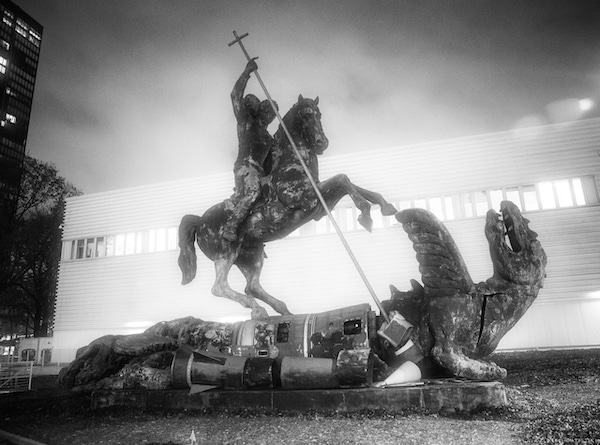 Italy and EU give green light to U.S. missiles in Europe

At the United Nations Glass Palace in New York, there is a metal sculpture entitled “Good Defeats Evil.” The statue depicts St. George slaying a dragon with his spear.

The USSR donated the statue in 1990 to celebrate the INF Treaty—the Intermediate-Range Nuclear Forces Treaty signed with the U.S. in 1987. The INF Treaty eliminated short-range and intermediate (between 300 and 3,300 miles) ground-based nuclear missiles.

Now, however, the nuclear dragon, which the sculpture depicts as dying, is coming back to life, thanks also to Italy and to the other countries in the European Union. At the General Assembly of the U.N., these states voted against the resolution presented by Russia on the “Preservation and observance of the INF Treaty.” They rejected the Russian resolution with 46 votes against 43 and 78 abstentions.

First the Barack Obama administration, then the Donald Trump administration, without any evidence, accused Russia of having experimented with a missile of the forbidden category and announced the intention to withdraw from the INF.

At the same time, the U.S. launched a new program to install nuclear missiles in Europe aimed at Russia. These missiles would also be deployed in the Asia-Pacific region against China.

The Russian representative at the U.N. warned that “to all intents and purposes, this constitutes the beginning of an arms race.” In other words, he warned that if Washington were to re-install nuclear missiles aimed at Russia in Europe (like the Cruise missiles deployed in Comiso, Italy, in the 1980s), Russia would re-install similar missiles on its territory aimed at targets in Europe.

Such Russian missiles are incapable of reaching the United States.

Ignoring all the above, the EU representative at the U.N. accused Russia of undermining the INF Treaty and announced the vote against the Russian resolution by all the countries of the Union because “the resolution presented by Russia deviates from the issue being discussed.”

In essence, therefore, the European Union has given a green light to the possible installation of new U.S. nuclear missiles in Europe, including in Italy.

From the whole political spectrum in the Italian Parliament, no voice was raised to demand that the Parliament decide how to vote at the U.N. Nor has any voice been raised in Parliament to demand that Italy observe the Non-Proliferation Treaty, which requires that the U.S. remove the B61 nuclear bombs from Italian territory and refrain from installing the new and even more dangerous B61-12 bombs there starting in the first half of 2020.

The fundamental constitutional principle that “sovereignty belongs to the people” is thus violated again. And since the political-media apparatus deliberately keeps Italians in the dark on these issues of vital importance, this violates the people’s right to information, in the sense not only of the freedom to inform but also of the right to be informed.

Neither now nor later will there be time to decide: An intermediate-range ballistic missile takes only 6 to 11 minutes to reach and destroy the target with its nuclear warhead.

Manlio Dinucci is an anti-militarist analyst based in Pisa, Italy. This article was first published in the Italian periodical Il Manifesto on Jan. 7. Workers World Managing Editor John Catalinotto translated it.