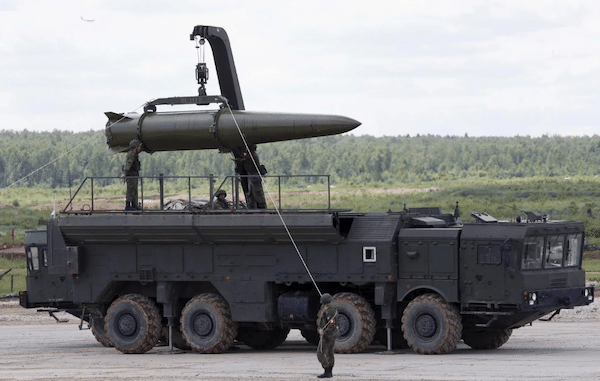 The Intermediate-range Nuclear Forces (INF) treaty, which played a crucial role in containing the nuclear arms race between the U.S. and Russia, has been axed by the Trump-administration. The U.S. announced its withdrawal from the treaty on February 2. After the announcement, Russia followed suit. The treaty’s provisions require a six-month notice period, after which the U.S. is no longer obliged to comply with it. The treaty prohibits the production, testing or possession of missiles and its ground-based launchers that have a range of 500 and 5,500 kilometers.

The extremely short periods of time within which these missiles could obliterate enemy cities gave little time for the U.S. and the then Soviet Union to properly assess the credibility of a perceived nuclear attack from the other, before responding to it by launching its own weapons.  It is to contain the risk of such a situation that this treaty, prohibiting the two entire classes of missiles and their ground-based launchers, was signed between Ronald Reagan and Mikhail Gorbachev in 1987. As many as 800 such missiles deployed by the U.S. and 1,800 deployed by the Soviet were destroyed under the agreement by 1991.

Last Saturday, soon after the announcement of the U.S. withdrawal by the secretary of state Mike Pompeo, the NATO threw its lot with the U.S., releasing an official statement announcing that it “supported the finding of the United States that Russia is in material breach of its obligations under the INF Treaty”. The statement concluded by urging “Russia to use the remaining six months to return to full and verifiable compliance to preserve the INF Treaty.”

Russia, in turn, notified its own withdrawal, after its efforts earlier this month to salvage the agreement evoked a negative response from the U.S. At a meeting in Geneva on January 15, the Russian authorities invited the U.S. officials to inspect its 9M729 missile, which the latter alleges is in violation of the treaty.

Russia has maintained that 9M729 missile is an upgraded version of its now scrapped predecessor 9M728, which had a range of 490 kilometers. Because of the accuracy-enhancing upgrade to the guidance system and the capacity-enhancing upgrade to its warhead, the weight and size of the new missile has increased, as a result of which its range has come down to 480 kilometers, which is 20 kilometers less than what would be a violation.

However, the offer made by Russia to allow the U.S. to inspect the system was refused. The U.S. state undersecretary for arms control and international security, Andrea Thompson, insisted that the U.S. would not be able to “confirm the distance that the missile can travel” through an inspection. She then went on to advance the circular argument that the only way Russia could “return to compliance in a manner that we can confirm”, is by undertaking a “verifiable destruction of the non-compliant system”.

While insisting that the missile’s range cannot be known by inspection, the U.S., at the same time, declared that Russia had already tested the missile at speeds prohibited. On November 30, its Director of National Intelligence, Daniel Coats, said:

While the INF Treaty bans all ground based missile systems within the prohibited range, it allows you to test missiles from a fixed launcher as long as you do not intend to base them on the ground. For example, basing missiles on ship or aircraft. Aware of this treaty provision, Russia initially flight tested the 9M729–a ground based missile–to distances well over 500 kilometers from a fixed launcher.  Russia then tested the same missile at ranges below 500 km from a mobile launcher. By putting the two types of tests together, Russia was able to develop a missile that flies to the intermediate ranges prohibited by the INF Treaty and launches from a ground-mobile platform.

While the correctness of “putting the two types of tests together” is itself questionable when the treaty makes explicit exceptions for certain kinds of testing, Russia has argued it has remained compliant by insisting that the missile’s maximum range is limited to 480 kilometers, and offered the U.S. to inspect it for itself, rather than demanding its destruction.

In fact, as admitted in a report earlier this month by the Congressional Research Service (CRS)–which is “a legislative branch agency within the Library of Congress”–the “United States has not disputed, publicly, Russia’s assertion that it did not test the missile to INF range, but it did note, in the State Department’s Annual Report, that Russia has attempted to “obfuscate the nature of the program.”

These grievances expressed by the U.S. constitutes what it sees to be the “extraordinary events” that “have jeopardized its supreme interests”, which is the only grounds on which a provision for withdrawal from treaty is made under its Article 15.

The intransigence of the U.S.

Meanwhile, Russia has been expressing, although without threatening to scrap the treaty, its own concerns about some of the U.S.-deployed weapon systems, which it believes to be in violation. Russian authorities have demanded that the U.S. demonstrate the compliance of the Mk-41 launchers deployed in Romania and Poland.

The said purpose of these launchers is to host SM-3 missile interceptors, which are not banned under the treaty. “However”, former U.S. Ambassador to Ukraine Steven Pifer wrote for the Brookings Institute, “the Mk-41 launcher is standard on U.S. Navy warships. On board warships, the Mk-41 holds a variety of weapons, in addition to SM-3 interceptors, including the BGM-109C Tomahawk land-attack cruise missile. The Tomahawk has a range of about 1,500 kilometers. Other than that it is launched from the sea rather than land, it shares many similarities with the BGM-109G ground-launched cruise missiles eliminated under the INF Treaty.”

Regarding the Russian argument that MK-41 was therefore not in compliance with the treaty, he wrote in the National Interest, “U.S. officials should have made clear to their counterparts that if they [Russians] would seriously address U.S. concern about the 9M729, then the U.S. side would deal with the Russian concern about the Mk-41.”

However, the U.S. only maintained that “The version of the MK-41 system to be based in Romania and Poland will not be the same as the shipboard version that has been used to launch Tomahawk cruise missiles, even though it will use some of the same structural components as the sea-based system.” Unlike Russia, the U.S. has refused to give a demonstration or allow an inspection of its launcher to verify this claim.

Drones and target missiles are also in violation: Russia

Russia has also been complaining since 2000 about the American use of a missile, known as Hera, as a target to test its missile interceptors. The Hera has a range of 1,000 kilometers and uses the engine of the Minuteman II long-range missiles–components of which were scrapped under the INF treaty–with modifications. Russia maintained that both the range of Hera and the use of Minuteman II’s guidance components is banned under treaty. Further, Russia also pointed out that its own SS-23 missile, which had a similar range, was scrapped at the insistence of the US.

However, the U.S. has continued to use Hera on the grounds that since the missile was never loaded with a warhead, it cannot be regarded as having been “flight tested or deployed for weapons delivery” at ranges prohibited. Regarding the use of components from Minuteman II’s guidance system, the U.S. argues that the treaty allows it to remove the said guidance components before eliminating the Minuteman II, and reuse the removed parts in other systems not covered under the treaty.

The unmanned aerial vehicles used by the U.S., known popularly as drones, also violate the treaty as they can launch missiles whose range varies between 500 and 5,500 kilometers, according to Russia’s position. The CRS report explains the American rationale for its use despite the treaty as follows:

“The treaty defines a cruise missile as “an unmanned, self-propelled vehicle that sustains flight through the use of aerodynamic lift over most of its flight path.” It further specifies that a ground-launched cruise missile banned by the treaty means “a ground-launched cruise missile that is a weapon-delivery vehicle.” While it is true that drones sustain flight through the use of aerodynamic lift, they do not necessarily meet the treaty’s definition of unmanned and self-propelled. Although drones do not have pilots on board, they are piloted remotely, with pilots based at facilities on the ground. Moreover, although armed drones can deliver weapons to targets, they are platforms that carry weapons, not weapons themselves.”

This, the U.S. argues, makes a drone more similar to an aircraft rather than a missile launcher, and is hence not covered under the treaty.

On January 24, a week before the American withdrawal was formally announced, the Bulletin of Nuclear scientists warned in the 2019 Doomsday Clock Statement that by abandoning the Iran nuclear treaty and now threatening to withdraw from the INF treaty, the U.S. was taking “grave steps towards a complete dismantlement of the global arms control process.”

The clock’s time for this year was still maintained at 2 minutes to midnight, as it was in 2018. The last time the world was so close to a nuclear apocalypse was in 1953, when both the Soviet Union and the U.S. tested H-bombs. Now, with the scrapping of the treaty confirmed–unless the two parties decide to reach an agreement to salvage it within six months–the minute hand is set to tick closer to midnight than it has ever been.

The U.S. has already announced its intention to deploy a new low-yield nuclear weapon to counter Russia. One day before announcement of the U.S. withdrawal from the treaty, Popular Mechanics reported, “According to the National Nuclear Security Administration, the first W-76-2 is under construction at the Pantex Plant in Texas.. The first warhead should reach the U.S. Navy by late 2019.”

The U.S. is developing this weapon to counter what it believes to be a change in Russia’s nuclear policy to increase permissibility towards the use of tactical nuclear-weapons in small conflicts–an assessment denied by Russia and refuted by U.S.-based critics.

The deployment of this new low yield nuclear bomb, which has about a third of the power of the one dropped on Hiroshima, might mark a renewed slide towards the increasing acceptance of the old and dangerous idea that a “limited nuclear war” could be fought in a contained manner, and won.