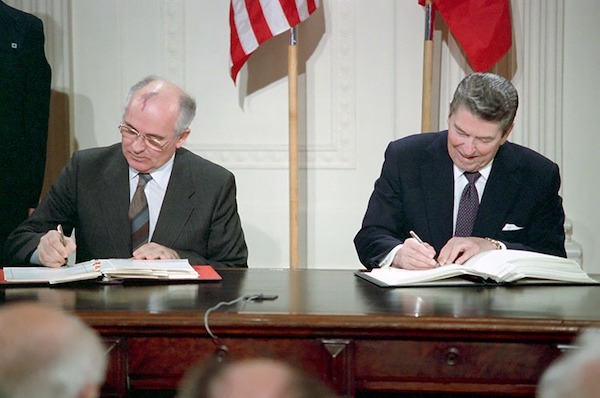 Even before President Trump reversed his position and announced (at a campaign rally for Republican congressional candidates in Nevada, no less) that he was pulling the United States from the Intermediate-Range Nuclear Forces Agreement (INF), the era of significant nuclear arms control agreements between the United  States and Russia was in danger of ending. Such a development must be forestalled at all costs, because arms control efforts have over the last 50 years shown themselves to be remarkably effective.

From the 1963 Limited Test Ban Treaty, which banned nuclear testing in the atmosphere, to the 2011 New START Agreement, which limited the two countries to no more than 1,550 deployed nuclear weapons on no more than 700 deployed delivery vehicles, the two major nuclear powers have concluded dozens of bilateral agreements and supported several multilateral arms pacts.

As a result, the total number of nuclear weapons possessed by the United States and the Soviet Union/Russia has dropped from about 60,000 in 1972 to approximately 13,000 today. Moreover, the agreements have provided for extremely intrusive inspections that ensure that both parties are living up to their terms.

These U.S.-Russia arms control treaties have been concluded by both Democratic and Republican presidents, and Soviet Communist Party leaders and Russian presidents. In addition to the formal arms control treaties, the two major nuclear powers have also entered a number of executive agreements designed to avoid provocative actions or mistakes that could lead to a nuclear exchange. These included establishing a communications hotline in 1963, in the wake of the Cuban Missile Crisis, and entering the Incidents at Sea Agreement in 1972.

In addition to the bilateral agreements, the United Nations has brokered a number of treaties with the majority of the global community to limit the spread and testing of nuclear weapons, including the Nuclear Non-Proliferation Treaty (NPT) of 1968, the Comprehensive Test Ban Treaty (CTBT) of 1996, and the Treaty Prohibiting the Possession of Nuclear Weapons of 2017.  Unfortunately these global treaties have not been ratified by all of the world’s leading powers. For example, the U.S. Senate failed to ratify the CTBT, and none of the nine nations that currently possess nuclear weapons ratified the 2017 nuclear ban treaty. However, these multilateral agreements did set a global norm: Nuclear weapons should never be used again, and non-nuclear states should not develop nuclear weapons. And the international community has put significant sanctions in place against countries, like Iran and North Korea, that have violated the NPT.

These bilateral and multilateral treaties have improved global security in a number of important ways. They have reduced the number of strategic nuclear weapons possessed by the United States and Russia and, in the case of the INF, eliminated an entire class of weapons. Also, these agreements have motivated many countries not to develop nuclear weapons in the first place, and several nations, including South Africa and Iran, were persuaded to actually give up or stop producing these weapons.

There are at least five reasons this very productive and successful era of arms control may now be ending:

To reverse this dangerous trend toward arms control collapse, the United States should immediately take Putin up on his offer to extend New START for five more years and begin work on a follow-on treaty that will reduce the number of deployed nuclear weapons to no more than 1,000. This process of building the next agreement when an existing arms reduction agreement nears its expiration date has been followed successfully in the past; there is no reason it cannot work now. In addition, the United States should allow the Russians to inspect the proposed missile defense sites in Poland and Romania to demonstrate that they cannot be used for offensive purposes. In return, rather than withdraw from the INF Treaty, the United States should ask to inspect the Russian 9M729 (SSC-8), which is the missile the United States claims violates the INF, and seek to negotiate a solution, if the missile is indeed found to violate the treaty.

Our NATO allies say the INF is crucial to Euro-Atlantic security. Preserving it will help stabilize the entirety of the arms control regime.  At that point, the United States could take further reasonable and practical steps to make sure the arms control era continues well into the future. Among these are the formal adoption of a no first use policy for nuclear weapons, something Putin recently embraced and something the United States has refused to do since the Cold War, when the Soviets had superior conventional forces, a situation that no longer exists. And ultimately, both the United States and Russia could seek to make China a part of a new, enlarged INF Treaty that would curb destabilizing cruise and ballistic missile programs.