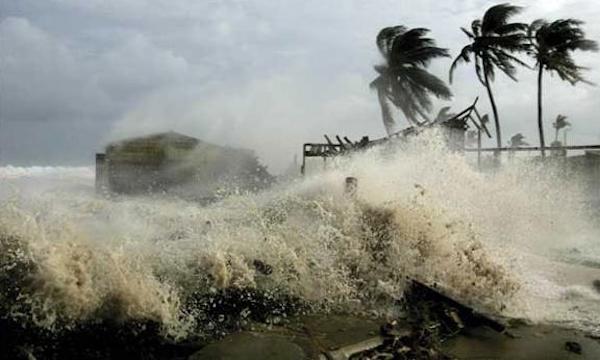 Some people say that the climate crisis is something that we [all] have created. But that is not true, because if everyone is guilty, then no one is to blame. And someone is to blame.

Some people, some companies, some decision makers in particular, have known exactly what priceless values they have been sacrificing to continue making unimaginable amounts of money. And I think many of you here today belong to that group of people.

Thunberg is right. The global “1 percent” of super-rich individuals and their political servants–the people invited to attend the World Economic Forum–bear a double responsibility for the climate crisis.

First, emissions from their luxury lifestyles are massive. Think of all the building materials and energy used in their mansions, the regular flights on private jets and the pollution associated with manufacturing all the luxury items they consume. According to a 2015 report by the charity Oxfam, someone in the wealthiest 1 percent globally emits, on average, 175 times more carbon than someone in the poorest 10 percent. The poorest half of the world’s population–almost 4 billion people–is responsible for just 10 percent of emissions.

These figures should be remembered for the next time someone argues that “overpopulation” is the problem. This argument isn’t just wrong: it also plays directly into the hands of those who bear the most responsibility for rising emissions. It diverts attention away from the actions of big business and the rich, and onto those who both pollute the least and have the least power to do anything about it.

The second, and more important, way the ruling class bear responsibility for the climate crisis is through their role as economic and political decision makers.

The world’s rich and powerful, day in, day out, make the decisions that keep our society on its current environmentally destructive course. They’re the ones who invest in new coal mines and fracking projects, who are clearing our forests, using chemicals that pollute our land, air and water, profiting from the overfishing of our oceans and so on. And the politicians let them get away with it.

The standard defence of capitalists everywhere is that they’re just humble servants of the market, responding to the demands of consumers. Similarly, politicians argue their failure to address climate change and other environmental issues reflects the lack of support from voters. Both of these claims are false.

With politicians it’s very clear. A big majority of Australians, for example, have wanted action on climate change for more than a decade. A 2018 Lowy Institute poll found that 59 percent of people agreed with the statement: “Climate change is a serious and pressing problem. We should begin taking steps now even if this involves significant costs”.

An even bigger majority, 84 percent, agreed with the statement:

The government should focus on renewables, even if this means we may need to invest more in infrastructure to make the system more reliable.

All the evidence indicates that if politicians were prepared to take a strong stand against further expansion of Australia’s fossil fuel industry and for a rapid transition to renewables, it would be very popular. This is despite the fact that we’re subject to a barrage of propaganda from mining and other big business interests claiming that sustainability initiatives threaten the economy.

On the environment, people want change. It’s the politicians dragging their feet.

The business side of things requires a little more unpacking. If you take a snapshot of society at any point in time, it may appear as if the whole thing is operating according to the laws of supply and demand. People keep buying cars with petrol engines, for example, and these need to be supplied with fuel.

Seen in this way, it appears as if the purchasers of cars and other products share at least some of the responsibility for the environmental damage they cause. That’s why many people in the environment movement have been led to believe that changing individual consumption practices is the key to halting environmental destruction.

This view, however, ignores the historical and structural factors that constrain “consumer choice” within a very narrow range. Take the continued demand for cars. For almost a century now, our society has been shaped by the car industry. Public transport was run down, and in some cities shut down altogether (sometimes this process was led directly by the car industry–which bought up train and tram networks and then ripped up the tracks).

As car ownership grew, cities sprawled. Today, for the vast majority of people, car use isn’t a choice–it’s an absolute necessity. Only those who’ve lived all their lives in the wealthy inner suburbs of major cities could think otherwise.

Reducing our reliance on cars would require a massive investment in public transport infrastructure–a level of investment that no capitalist government has shown any propensity to support. In this context, blaming ordinary people for not ditching their cars is worse than useless. As with the argument about overpopulation, it lets off the hook those who are truly to blame for climate change.

Many other examples could be mentioned. We don’t live in a system that allows people genuine “free choice” about what they consume, where they live, how they get to work and so on.

A 2017 report by researchers at climate institute CDP, formerly the Carbon Disclosure Project, found that, since 1988, more than 70 percent of global emissions can be traced to just 100 companies. These companies aren’t responding to consumer demand. They’re global behemoths that have shaped the economy, and the “choices” people make within that economy, in their interests.

It was far from inevitable that we would end up with the environmentally destructive hellscape that is global capitalism today. Solar power, for instance, has been around since the early part of the 19th century. At every point, however, the capitalist class has prioritised its own short term profits over the interests of humanity.

Burning coal to produce energy was quicker and cheaper than investing in the technology required to generate solar power. Selling millions of cars, and designing cities around their use, was more profitable than improving public transport systems.

The capitalists who occupy the commanding heights of the economy today shouldn’t be exonerated for these historical crimes. Frequently, the wealthy CEOs and investors who run the system have a direct lineage back to the “captains of industry” of earlier times. And even when they don’t, they clearly embrace and benefit from the mindset of “profit before planet” that their precursors established.

Despite all this, you might still ask, given the scientific consensus on the potentially devastating impacts of runaway climate change, why the rich seem so determined to continue with “business as usual”. True, they’re doing nicely for themselves from the set-up, but it’s textbook psychopathic behaviour to continually act in a way that is harmful to those around you (never mind one harmful to millions!) just because it suits your narrow interests.

The first part of the answer is that, despite their being responsible for the climate crisis, in all but the most apocalyptic scenarios they will not be among those who suffer the consequences. As with so many other things in our society, with environmental destruction, the rich can, literally, buy their way out.

Sea levels rising? They can move to another mansion elsewhere. Drought threatening the water supply? They can pay for water to be brought to them in trucks. Fire threatening their home? They can hire their own private crews of firefighters to stop the blaze. Food prices rising? Barely going to register–many will benefit through the increased value of their agricultural investments.

If we continue on our current trajectory, we’ll end up with a world divided between small, militarised and climate-proofed enclaves of the rich, and a poverty stricken and disaster-struck hinterland where the vast majority of the world’s population will face a daily struggle to survive. But given that’s more or less how the global ruling class already live, they’re unlikely to be overly concerned about this scenario playing out.

The response of countries such as the U.S. and Australia to the threat of climate change reflects this. Our governments are doing little to curb emissions. Meanwhile, they’re injecting massive amounts of money into building up the military–partly in recognition of the increasing levels of geopolitical instability associated with a warming world.

The second reason the rich are so reluctant to heed scientists’ warnings and steer a course away from climate catastrophe is that they see this as a threat to the capitalist system itself, and all the wealth, power and privilege they enjoy within it.

To make the necessary changes to the global economic system, we will have to confront the interests of the capitalists who have built their wealth off the back of the fossil fuel economy. At the very least, we’ll need large scale government intervention–for example to legislate against constructing new coal mines and to increase taxes on the rich to fund a rapid transition to renewables.

The worry for their side is that this might be a slippery slope. Once people get the (crazy!) idea that free market capitalism isn’t the best way to organise a society, and that large scale cooperation is the key to tackling climate change, who knows where it might lead? People might want to apply the same model to other things, like better public transport, health care, housing and so on.

The decades-long project of neoliberalism–centred on “user pays” and enforcing competitive individualism in every aspect of our lives–would lie in tatters. A society could be built based on genuine solidarity, on caring for the natural environment and for all the humans with whom we share this fragile planet.

This is the capitalist class’s nightmare. And it’s why we can’t rely on them to lead the change. No amount of warnings from scientists will be enough to convince them, or their parliamentary lackeys, to give up on a system they’ve built up over centuries and which has brought them, and continues to bring them, untold riches.

The recognition of the intractable division between rich and poor, capitalists and workers, in our society must be the starting point for any genuine strategy to address the climate crisis. The take home message is this: we can’t rely on them, so we have to rely on ourselves.

This was the message that Greta Thunberg took to the UN climate summit in Poland late last year. “We have not come here to beg the world leaders to care for our future”, she said. “They have ignored us in the past and they will ignore us again. We have come here to let them know that change is coming whether they like it or not. The people will rise to the challenge.”

Thunberg’s attitude is the right one for climate activists. No more prostrating ourselves at the feet of the powerful. No more lobbying. No more carefully worded reports designed to convince big business and politicians that the issues can be addressed with no real challenge to their system. Faced with our rulers’ criminal inaction on climate change, which has driven our planet to the brink of catastrophe, the answer must be revolution.

In 1848, when Karl Marx and Friedrich Engels penned the Communist Manifesto, they ended with a clarion call to revolution:

The workers have nothing to lose but their chains. They have a world to win.

Today, the need for revolution is more urgent. We no longer “have nothing to lose but our chains”. The risk is that if we allow our rulers to continue on their environmentally destructive course, we could also lose the world, and there will be nothing left for us to win.

Avoiding this outcome is the pressing task of our generation.