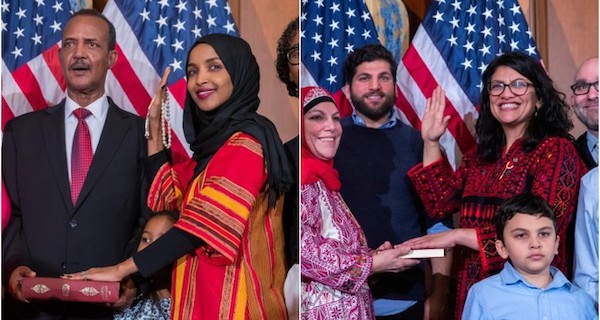 The vicious, dirty–and bipartisan–smear campaign against the first two Muslim women in the U.S. Congress, Ilhan Omar (MN) and Rashida Tlaib (MI), is just beginning. No one should imagine that Rep. Omar’s dignified apology for her tweets about the Israel lobby, which have been willfully twisted to accuse her of “anti-Semitic tropes,” will put an end to the attacks on her–or that Rep. Tlaib’s calling Donald Trump a “motherf****r” is what anyone is really upset about.

Ilhan Omar and Rashida Tlaib are under attack for who they are–as Muslim Arab-American women, and as progressive critics of U.S. foreign policy not only in Palestine but throughout the Middle East and in Latin America as well. They represent exactly what white nationalists and Islamophobes don’t think belongs in Congress, or for that matter in the United States. They also represent what the leadership of the Democratic Party doesn’t want either–outspoken opponents of the bipartisan blank check that Congress gives to the Israeli military, and the whitewashing of Israel’s brutal Occupation policies that veterans of the South African freedom struggle have called “worse than apartheid.”

Because the attacks on Ilhan Omar and Rashida Tlaib are certain to continue and escalate, it is essential that anyone who wants to be considered “progressive” come to their defense now. That includes telling the Congressional Democratic leadership that it’s absolutely unacceptable to censure or threaten to strip them of committee assignments. Otherwise, the racist hyenas aiming to destroy them will come back for more.

It’s “beyond chutzpah” for the Republicans to accuse these two women of anything improper. Until Rep. Stephen King’s most recent white-nationalist pronouncements, he was spewing racist garbage for years without facing consequences. And during all the years of the racist “birther” and “secret Muslim” lies about Barack Obama, the only leading Republican who explicitly denounced those attacks was the late John McCain. All the rest were silent or complicit in that smear campaign.

When it comes to the substance of Middle East policy, how much better are the Democrats? Right now, a bill is “on the desk” (i.e. pending) in the House of Representatives, enabling state legislatures to effectively outlaw support of the nonviolent BDS (Boycott/Divestment/Sanctions) campaign against Israel’s discriminatory laws and brutal Occupation practices. This legislation has already passed the Senate, right after the government shutdown ended, with 22 Democrats and all Republicans except Rand Paul voting for it.

This legislation is a blatantly unconstitutional attack on free speech and political advocacy, a bipartisan move to flush the First Amendment down the drain, which is why every civil liberties organization vehemently opposes it. It’s this legislation whose drafters in the Senate (Marco Rubio and Joe Manchin), Rashida Tlaib wrote, “forgot which country they represent,” and which Ilhan Omar tweeted is fuelled by “it’s the Benjamins, baby”) and followed up by citing “AIPAC” (the American Israel Public Affairs Committee. “Benjamins” refers to hundred-dollar bills, as you might not know if you don’t carry them around in your wallet).

Anyone who understands the history of antisemitism is familiar with the myth that “the Jews” control society, or the world, through control of money, banks, media and by various conspiratorial mechanisms. For centuries, popular and elite culture in Europe (although not in African countries like Somalia, where Ilhan Omar is from) was saturated with these falsehoods.

That doesn’t mean it’s antisemitic to point out that AIPAC, and even more extreme “pro-Israel” types like Sheldon Adelson, terrorize politicians by deploying massive campaign funds to keep them in line. We can expect to see that play out in Ilhan Omar and Rashida Tlaib’s districts in the next election season, even though Israel and Palestine are not the major concerns of voters there. It is neither antisemitic, nor is it too early, to anticipate them being aggressively “primaried” with external funding.

In another tweet a few years earlier, Ilhan Omar referred to Israel having “hypnotized” U.S. and world political leadership. That’s not antisemitic, but it isn’t quite accurate either. Far from being “hypnotized,” the U.S. political establishment has an eyes- wide-open bipartisan policy of support for Israel’s strategic and military role as a partner of U.S. imperialism in policing and trying to dominate the Middle East. That’s an entire discussion in itself, of course, but it needs to be at the forefront of the solidarity movement’s understanding of the U.S.-Israel relationship.

It is not an attack on Jews to point out how Israel’s array of discriminatory laws, its brutal government practices, and its recently enacted “Jewish nation-state law,” are underpinned by a state ideology of ethno-religious supremacy that is racist at its core. That’s why some of the murderous U.S. white-nationalist marchers in Charlottesville chanting “Jews will not replace us” (some “very fine people,” Trump called them), including their leading figure Richard Spencer who calls himself a “white Zionist,” see Israel as a model for the “white Christian America” they envision.

Condemning Israel’s atrocities against the Palestinian people is no more antisemitic than calling out the kingdom of Saudi Arabia for the murder of Jamal Khashoggi and the genocide in Yemen is “anti-Muslim.” As a matter of fact, it’s not only Islamophobes and hardcore Zionists who hate what Reps Omar and Tlaib represent. You can be sure that the Saudi rulers, who brutally suppress the rights of women and dissenters in that country, are very unhappy to see them in the U.S. Congress.

Some on the left have described Ilhan Omar and Rashida Tlaib, as well as the openly socialist Alexandra Ocasio-Cortez, as “our class warriors dropped behind the enemy lines.” We can’t speak for them, and we don’t know whether they see themselves that way, but we do know as advocates of social justice, democracy, and self-determination for oppressed peoples at home and everywhere, that it’s our absolute responsibility to defend them.