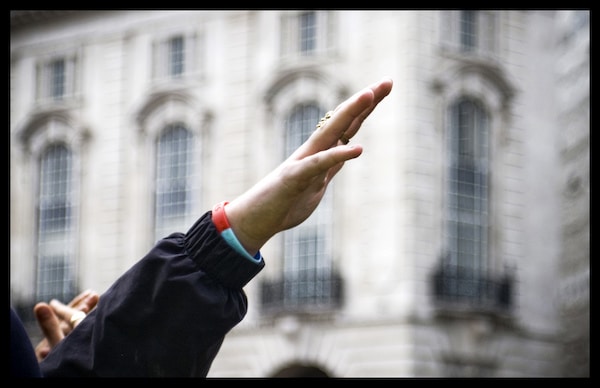 A demonstration of the members of the English Defence League. Photo by Lewisham Dreamer (Flickr)

In June last year fascist and hard right forces staged their biggest demonstration in Britain since the 1930s, as 15,000 people called for the release from prison of Tommy Robinson (real name Stephen Yaxley-Lennon), incarcerated for contempt of court. Robinson’s imprisonment became a cause célèbre for the international far right, and the demonstration symbolised the drawing together of Europe’s major extreme right parties and their willingness to ally themselves with more-or-less openly fascist movements.

Speakers included Belgian MP Filip Dewinter of the Flemish Vlaams Belang (formerly Vlaams Blok) and Geert Wilders of the Muslim-baiting Dutch Party for Freedom. Messages were read out from numerous international far right parties and personalities, including the French National Front now called the National Rally–Rassemblement National (RN). Another key speaker was former UKIP MEP Janice Atkinson, who, along with Geert Wilders, has used her position in the European parliament to promote a growing alliance of the major hard right parties with more openly fascist movements.

Several days before the demonstration she hosted a meeting in the European parliament, with British neofascist speakers, to enlist support for Robinson. Giving presentations were Lee Williams from the Democratic Football Lads Alliance (DFLA) and Richard Inman of Veterans Against Terrorism, as well as Robinson’s cousin Kevin Carroll–a former leader of the fascist English Defence League and before that a supporter of the British National Party (BNP). Geert Wilders subsequently organised a meeting for Robinson in the Dutch parliament.

The role of Atkinson in promoting the new fascists reflected the tensions among UKIP MEPs over whether or not to participate in the hard-right European parliament group, the Europe of Nations and Freedom Group, which includes the French RN, the Dutch Party of Freedom, the Freedom Party of Austria, the Belgian-Flemish Vlaams Belang and Italy’s Lega party, the dominant force in the Italian government. UKIP, under pressure from former leaders Nigel Farage and Paul Nuttall, refused to join this hard-right bloc. After May’s Euro elections there will be no British MEPs because of Brexit, but in any case, new UKIP leader Gerard Batten, who spoke at the June ‘free Tommy’ demonstration, with the assistance of former member Janice Atkinson, has cemented UKIP’s alliance with the European neofascists. From the new UKIP viewpoint, Farage and Nuttall are yesterday’s people.

After former White House advisor Steve Bannon was fired from the White House in July 2017, he set off on a European tour to form a new far right International–‘The Movement’. On that tour he was feted at the national conference of the fascist-led French RN and was welcomed onto the stage by the movement’s leader, Marine Le Pen. On a subsequent visit to Italy he discussed with deputy premier Matteo Salvini of Lega, and was given a rapturous reception at the annual rally of the Brothers of Italy, the direct descendant of the fascist Italian Social Movement (MSI). Bannon’s reception in Italy reflected the depth of that country’s descent into the political dominance of anti-immigrant, xenophobic demagogy. Forty per cent of Italians have a favourable view of Donald Trump, way above any other European country.

Despite the large amount of money that Bannon mobilised for this project, ‘The Movement’–originally established by rich Belgian lawyer Mischaël Modrikamen–has received important setbacks. Bannon’s problem is twofold. First, he wanted to create a unified far right list for the 2019 Euro elections, which most extreme right parties rejected, and second, the major far right parties already have their own international ‘club’ in the European parliament. They don’t need Bannon to co-ordinate them.

Despite Bannon’s positive reception by the French RN, the party has rejected his proposal for a joint electoral list. And the German AfD have been scathing in their rejection of Bannon’s project. AfD leader Alexander Gauland said it was ‘bound to fail’. In any case, despite admiration for Donald Trump among the far right, Americans telling European nationalists what to do is another matter. Bannon can inspire the European far right, but not organise it.

Present at the June 9 demonstration were the all-male ‘Western chauvinist’ Proud Boys group from the U.S. and the Wolność (Liberty) party of Poland. More significant was one fascist group that definitely tries to organise across borders and has tried to develop a coherent ideology–Generation Identity (GI). The political position of GI is what it calls ‘ethnopluralism’. Although the pluralism bit sounds positive, in reality it means the construction of nations on the basis of ethnicity (‘based on biology’ as their publicity says), and the exclusion of outsiders–the opposite of multiculturalism. GI tried to put this into practice in 2017 by raising €200,000 for a campaign to hamper the work of NGOs saving the lives of refugees crossing the Mediterranean. This campaign didn’t come to much–the intervention of the Italian government and the EU was much more effective in disrupting this humanitarian work. It is doubtful that GI has more than a few hundred supporters in Europe–at this stage. The main funder of the movement and its ideological guru is American Martin Sellner, who tried to recruit Tommy Robinson in his 2018 visit to the UK. Robinson, having been appointed an ‘advisor’ to the increasingly right-wing UKIP, had bigger fish to fry.

Funding for the far right from the United States is a major factor in the rise of neofascist extremism. The ‘free Tommy Robinson’ campaign received upwards of £60,000 from the U.S.-based Middle East Forum (MEF), whose prosaic name is a front for militant anti-Muslim propaganda funded by multimillionaires. MEF sent a full-time organiser to help with the June 2018 ‘free Tommy Robinson’ demonstration. Also highly active in support of Robinson was the David Horowitz Freedom Centre, another extreme right think tank and organising centre funded by multimillionaires. David Horowitz, bizarrely, was in Britain in the 1960s and prominent in the Bertrand Russell Peace Foundation and the Vietnam Solidarity Campaign. Penguin hardback publisher Allen Lane put out his Imperialism and Revolution, which ended up on many left-wing bookshelves. Now he is a pedlar of neofascist bile.

The spread of far-right ideas and movement benefits enormously from the electoral successes of far-right parties, and especially of course from the position of Donald Trump as U.S. president. Trump frequently re-tweets, on his massively followed twitter channel, posts put up by far-right bloggers on Gab (the far-right twitter clone) and on platforms like 4chan. Outrageously he recently repeated the fantasy claims of the far-right bloggers that Hungarian billionaire George Soros was financing the caravan of central American migrants to the U.S. border.

In local communities, in the streets, in elections and online, the growing international operation of the far right and fascists has to be fought. Their successes are many and they have wealthy backers. Building international opposition to the far right is the aim of the No Pasaran! conference in London on March 2, with delegations from 14 countries already confirmed.

Phil Hearse is one of the authors of Creeping Fascism: what it is and how to fight it, which will be launched at the No Pasaran! conference.