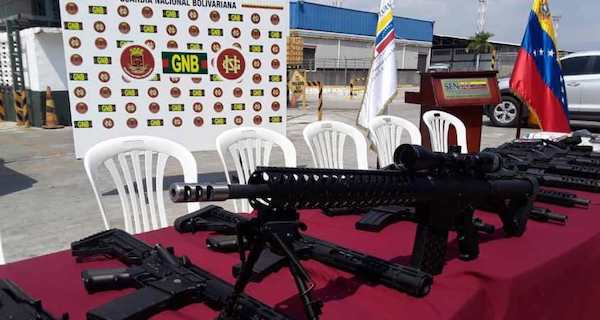 VIDEO: A Visit to Mysterious US Air Firm Accused of Arming Right-Wing Insurgency in Venezuela

Venezuelan authorities discovered a secret cache of weapons and equipment on February 3 on board a Boeing 767. The shipment included 19 assault weapons (mostly AR-15s) and 90 military grade radio antennas. The flight had flown from Miami to Valencia in the Venezuelan province of Carabobo.

Venezuelan authorities accused the CIA and far-right wing groups in Miami of smuggling the weapons into the country to help spark a civil war.

Days later, the DC-based media outlet McClatchy reported that the plane had been suddenly flying between Philadelphia and Miami and across the continental U.S.

McClatchy discovered that the plane had suddenly begun making constant trips–40 in total–to Colombia and Venezuela, sometimes multiple times a day during the month of January. The flights began immediately following the swearing-in of Venezuela’s incumbent president, Nicholas Maduro.

As McClatchy’s DC Bureau reported, the plane was the property of 21Air LLC, an air charter firm based out of Greensboro, North Carolina.

We paid a visit to its office, which no one has yet done.

According to an Amnesty International report, the chairman and majority owner of 21Air, Adolfo Moreno, and the director of quality control, Michael Steinke, have had ties to Gemini Air Cargo–a company that was involved in more than 30 air charter services used for CIA rendition. Those flights ferried individuals suspected of terrorism by U.S. authorities to be tortured and interrogated at CIA “black sites” around the world.

While 21Air has denied allegations of being a CIA front company, or being involved in the illegal shipment of arms into Latin America, The Grayzone sought out more information.

When we arrived, we realized that 21Air had moved its offices to a new office in the same business park. Their former office was located directly adjacent to a small office of Lockheed Martin.

When we reached 21Air’s current offices, the locked door was briefly opened and we saw multiple men working inside on computers.

They clearly did not want to speak to a journalist, and threatened to call the police.

As this report clearly shows, more research needs to be done into the Trump administration’s expanding assault on Venezuela.

But the dirty war may have already begun.

Jeb Sprague is a Research Associate at the University of California, Riverside and previously taught at UVA and UCSB. He is the author of Globalizing the Caribbean: Political economy, social change, and the transnational capitalist class (Temple University Press, 2019), Paramilitarism and the assault on democracy in Haiti (Monthly Review Press, 2012), and is the editor of Globalization and transnational capitalism in Asia and Oceania (Routledge, 2016). He is a co-founder of the Network for the Critical Studies of Global Capitalism. Visit his blog at: jebsprague.blogspot.com.