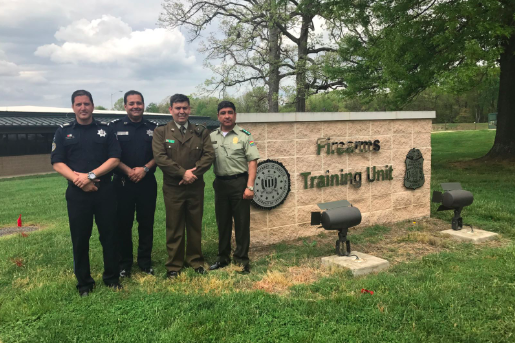 Photo of Calderón Mariscal (center-right) at the FBI training academy that is 36 miles outside of Washington, DC.

The United States played a key role in the military coup in Bolivia, and in a direct way that has scarcely been acknowledged in accounts of the events that forced the country’s elected president, Evo Morales, to resign on November 10.

Just prior to Morales’ resignation, the commander of Bolivia’s armed forces Williams Kaliman “suggested” that the president step down. A day earlier, sectors of the country’s police force had rebelled.

Though Kaliman appears to have feigned loyalty to Morales over the years, his true colors showed as soon as the moment of opportunity arrived. He was not only an actor in the coup, he had his own history in Washington, where he had briefly served as the military attaché of Bolivia’s embassy in the U.S. capital.

Kaliman sat at the top of a military and police command structure that has been substantially cultivated by the U.S. through WHINSEC, the military training school in Fort Benning, Georgia known in the past as the School of the Americas. Kaliman himself attended a course called “Comando y Estado Mayor” at the SOA in 2003.

At least six of the key coup plotters are alumni of the infamous School of the Americas, while Kaliman and another figure served in the past as Bolivia’s military and police attachés in Washington.

Within the Bolivian police, top commanders who helped launch the coup have passed through the APALA police exchange program. Working out of Washington DC, APALA functions to build relations between U.S. authorities and police officials from Latin American states. Despite its influence, or perhaps because of it, the program maintains little public presence. Its staff was impossible for this researcher to reach by phone.

It is common for governments to assign a small number of individuals to work at their country’s embassies abroad as military or police attachés. The late Philip Agee, a one-time CIA case officer who became the agency’s first whistleblower, explained in his 1975 tell-all book how U.S. intelligence traditionally relied on the recruitment of foreign military and police officers, including embassy attachés, as critical assets in regime change and counter-insurgency operations.

As I found from the more than 11,000 FOIA documents I obtained while writing my book on the paramilitary campaign waged in the lead up to the February 2004 ouster of Haiti’s elected government and the post-coup repression, U.S. officials worked for years to ingratiate themselves and establish connections with Haitian police, army, and ex-army officials. These connections as well as the recruitment and information gathering efforts eventually paid off.

In Bolivia, too, the role of military and police officials trained by the U.S. was pivotal in forcing regime change. U.S. government agencies such as USAID have openly financed anti-Morales groups in the country for many years. But the way that the country’s security forces were used as a Trojan Horse by U.S. intelligence services is less understood. With Morales’s forced departure, however, it became impossible to deny how critical a factor this was.

As this investigation will establish, the coup plot could not have succeeded without the enthusiastic approval of the country’s military and police commanders. And their consent was influenced heavily by the U.S., where so many were groomed and educated for insurrection.

Leaked audio reported on Bolivian news website La Época, and by elperiodicocr.com and a range of national media outlets, reveals that covert coordination took place between current and former Bolivian police, military, and opposition leaders in bringing about the coup.

The leaked audio recordings show that former Cochabamba mayor and former presidential candidate Manfred Reyes Villa played a central role in the plot. Reyes happens to be an alumnusof WHINSEC (formerly known as the School of the Americas), who currently resides in the United States.

The other four who are introduced or introduce themselves by name in the leaked audio are General Remberto Siles Vasquez (audio 12); Colonel Julio César Maldonado Leoni (audio 8 and 9); Colonel Oscar Pacello Aguirre (audio 14), and Colonel Teobaldo Cardozo Guevara (audio 10). All four of these ex-military officials attended the SOA.

Cardozo Guevara, in particular, boasts about his connections amongst active officers.

The identities of these individuals are confirmed by cross-checking the data of the School of Americas Watch lists of alumni with Facebook and local Bolivian news articles and the leaked audio recordings.

The School of the Americas is a notorious site of education for Latin American coup plotters dating back to the height of the Cold War. Brutal regime change and reprisal operations from Haiti to Honduras have been carried out by SOA graduates, and some of the most bloodstained juntas in the region’s history have been run by the school’s alumni. 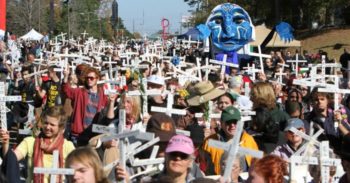 A protest vigil outside the School of the Americas at Fort Benning, Georgia.

For many years, anti-war protesters have staged a protest vigil outside the SOA’s headquarters at the Fort Benning military base near Columbus, Georgia.

The leader of those protests, Father Roy Bourgeois, has described the SOA as “a combat school. ” He continued:

Most of the courses revolve around what they call counter insurgency warfare. Who are the insurgents? We have to ask that question. They are the poor. They are the people in Latin America who call for reform. They are the landless peasants who are hungry. They are health care workers, human rights advocates, labor organizers, they become the insurgents, they’re seen as ‘el enemigo’ — the enemy. And they are those who become the targets of those who learn their lessons at the School of the Americas.

Bourgeois was deported from Bolivia in 1977 when he spoke out against the human rights abuses of Gen. Hugo Banzer, a right-wing dictator who rose to power through a U.S.-backed coup that toppled a leftist government. History repeats itself today as Banzer’s ideological heirs drive another socialist leader from power through time-tested destabilization tactics.

In the recently leaked audio recordings, coup plotters discuss plans to set ablaze government buildings, get pro-business unions in the country to carry out strikes, as well as other tactics – all straight out of the CIA playbook.

Also alluded to in the leaked audio is that the coup attempt would be supported by various evangelical groups as well as by Colombian President Iván Duque, ex-Colombian President Álvaro Uribe, and most notably Brazil’s neo-fascist President Jair Bolsonaro.

The plotters also mention the strong support of ultra-right U.S. senators Ted Cruz, Bob Menéndez, and Marco Rubio, who is said to have the ear of President Donald Trump when it comes to U.S. foreign policy in the Western Hemisphere.

Military and Police Attachées in DC: A breeding ground for U.S. intelligence networking

As tensions built over recent weeks, it was the commanding general of the Bolivian Police, Vladimir Yuri Calderón Mariscal, who broke the stalemate by leading large parts of the police force to revolt on November 9th, just a day prior to the resignation of Morales. 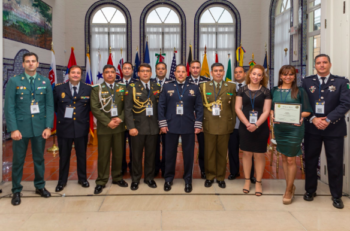 Then-Col. Vladimir Yuri Calderón Mariscal (third on the left) with other APALA officials in 2018.

In 2018 Calderón Mariscal served as President of Police Attachés of Latin America in the United States of America (APALA), which is based in Washington, DC.

APALA has been described as a “multidimensional security” program that works to build relations and connections between U.S. authorities and police officials from many of the Organization of American States members.

At APALA’s founding in 2012, then-OAS Secretary General José Miguel Insulza (center in photo below) met with the group’s leadership. 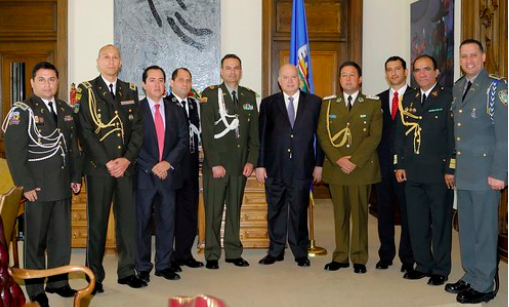 According to its Facebook page, the group “was created, with the objective of generating, promoting, and strengthening ties of solidarity, friendship, cooperation and support between the members of the group and their families through social, cultural activities, which allow to generate integral development.”

It claims to be facilitating the “integration and exchange of the police institutions that comprise it, in addition to promoting the exchange of successful experiences developed by the different police forces of Latin America.” 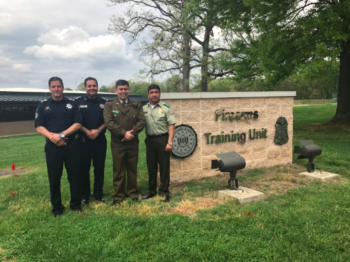 Photo of Calderón Mariscal (center-right) at the FBI training academy that is 36 miles outside of Washington, DC.

A mysterious organization, APALA has shut down its website ApalaUSA.com and does not answer phone calls. It functions in some capacity as an arm of U.S. federal agencies as its social media platform and now defunct website showcase numerous meetings and photos of APALA officials and participants alongside FBI, DEA, ICE, and other U.S. officials.

As Philip Agee explained in his book Inside the Company, the CIA often uses other U.S. government agencies such as the FBI and USAID, as well as various front-organizations, to carry out its clandestine activities without leaving fingerprints. In the tweet below, APALA participants are pictured at the FBI headquarters in Washington DC.

One of APALA’s key local members is Alex Zunca, a police officer in Baltimore who is the director of international affairs for the Hispanic National Law Enforcement Association, which is based in Washington, DC.

APALA’s street address listed on its now defunct website is the same address as the embassy of Mexico in Washington, DC. The group was apparently run out of the Mexican Embassy, at least between 2017 and 2018 when its website was active during the administration of the U.S. friendly former Mexican President Enrique Peña Nieto.

Interestingly, a colleague of Calderón Mariscal’s and also a former President of APALA is an associate minister of the Federal Police of Mexico named Nicolás González Perrin.

Below, he can be seen seated beside a Mexican national flag and an FBI hat. 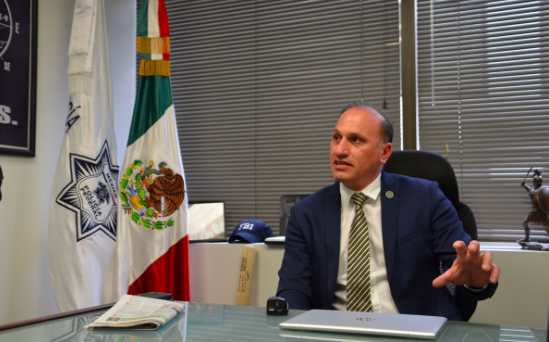 In a 2017 interview with the Washington Hispanic, a DC-based Spanish language newspaper, González Perrin declared “that APALA holds meetings, permanently, with the most significant federal agencies in the United States, ‘from INTERPOL to DEA, ICE and the FBI, who work with us, based on mutual needs.’”

Another important APALA participant is Hector Ivan Mejia Velasquez, the former General Commissioner of Honduras’s National Police, who has led brutal operations against protesters in his own country, and regularly posts anti-leftist screeds on social media.

Calls to APALA’s public contact, whose name appears to be Alvaro Andrade, went unanswered. My calls to his number, which is listed as being located in Rockville, Maryland, went straight to a voicemail stating that it was restricted. The webmaster of APALA’s former website is Mario Ruiz Madrigal, a system’s engineer in Mexico. 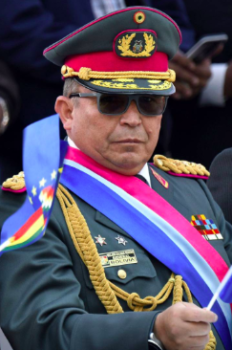 The other key official that helped to bring about the November 10th coup is General Williams Kaliman, the current head of Bolivia’s military. He served as a military attaché for his country’s embassy in Washington, D.C. in 2013. A decade prior, he had taken part in training at the SOA.  Little is known about his time in the United States.

For his part, deposed President Morales has claimed that a member of his own security team was offered $50,000 to betray him.

The November 10 coup d’état did not materialize out of thin air. Events that have transpired inside Bolivia are intimately connected to U.S. efforts to influence military and police forces abroad through programs like SOA and APALA.

While U.S. President Donald Trump cheers on a “a significant moment for democracy in the Western Hemisphere,” Bolivians are suddenly under the control of a de facto military regime.

Jeb Sprague is a Research Associate at the University of California, Riverside and previously taught at UVA and UCSB. He is the author of Globalizing the Caribbean: Political economy, social change, and the transnational capitalist class (Temple University Press, 2019), Paramilitarism and the assault on democracy in Haiti (Monthly Review Press, 2012), and is the editor of Globalization and transnational capitalism in Asia and Oceania (Routledge, 2016). He is a co-founder of the Network for the Critical Studies of Global Capitalism. Visit his blog at: jebsprague.blogspot.com.