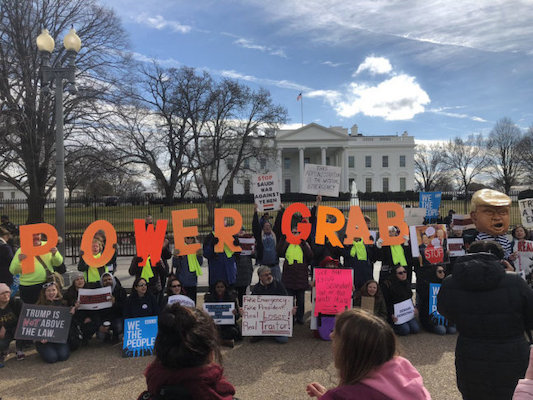 President Trump declared a “national emergency” to stop what he calls an “invasion” of drugs, sex traffickers, murderers and other criminals at the border with Mexico by building a wall between both countries.

Trump says he will use the national emergency to allocate over $8 billion to begin to build his wall, which Congress has explicitly denied him. This is a direct challenge to the constitutional power of Congress to say how federal funds it authorizes are spent, the “power of the purse”.

It is part of his drive to further his personal power–to move toward an increasingly authoritarian presidency.

Those he attacks are peaceful Latinos mainly from Mexico and Central America seeking asylum from violence and poverty largely created by U.S. imperialist policies and are obviously completely racist, designed to mobilize his white racist base.

His dispute with Congress is over funding for his wall. Democrats support his main contention, that immigration across the border must be reduced to a trickle. They say that a better way to do this is the militarization of the border with increased Border Patrol armed forces, helicopter and motion and heat sensor surveillance, more deportations and so forth, intensification of policies already put in place by presidents before Trump, including Obama.

The dispute came to a head over the budget funding the federal government. Democrats balked at Trump’s request for over $5 billion towards his wall. Trump then partially shut down the government to strong-arm the Democrats in Congress. The upshot was that there finally was an agreement in Congress for a bipartisan committee to work out a budget compromise.

This was done, and passed in both the House of Representatives and the Senate. The compromise included $1.7 billion for Trump’s wall, with increased funding for the rest of border “security” which both parties supported. Trump signed the new budget, but at the same time declared a “national emergency” under which he will allocate the $8 billion towards his wall.

This declaration is a direct usurpation of Congress’ constitutional power.

There are two ways that his declaration can be reversed. One is that both houses of Congress could vote to do so. Even if enough Republicans in the Senate so voted to pass it there, and the Democrats who have control of the House pass it, Trump has promised to veto such a resolution, which would require a two-thirds majority to override. Given the current relation of forces in Congress, that is very unlikely.

Or, it could be overturned in the courts. The Attorneys General of 16 Democratic controlled states have filed a federal lawsuit in California to do so, correctly charging that Trump’s action violates the Constitution.

Trump himself predicts that it is likely that the California courts will rule against him, but then it would be appealed to the Supreme Court, where, he says, the new solid rightist majority would back him.

Congress has over the course of the last century increasingly ceded power to the executive branch of government, which the president heads. One glaring example is that the Constitution says that only Congress can declare war. The last time that was done was in 1941, opening the U.S. entry into the Second World War. Since the end of that war, the U.S. has engaged in many wars and still is today, all initiated by presidents, not Congress.

“At key points in American history,” writes Elizabeth Goitein in the current issue of the Atlantic Monthly, “presidents have cited inherent constitutional powers when taking drastic actions that were not authorized–or in some cases, were explicitly prohibited–by Congress. Notorious examples include Franklin D. Roosevelt’s internment of U.S. citizens and residents of Japanese decent during World War II and George W. Bush’s programs of warrantless wiretapping and torture after the 9/11 terrorist attacks.” Goitein is co-director of the Liberty and National Security Program at the Brennan Center for Justice, acclaimed for its scholarship on the question.

Trump says that other presidents have declared states of emergency, and he is right about that. Many remain on the books when the situation addressed has passed.

Presidents can also rely on a cornucopia of powers provided by Congress,” Goitein writes, “which has historically been the principle source of emergency authority for the executive branch…. A more formalized approach evolved in the early 20th century, when Congress legislated powers that would lie dormant until the president activated them by declaring a national emergency.

For instance, the national emergency that Truman declared in 1950, during the Korean War, remained in place and was being used to help prosecute the war in Vietnam.

Aiming to rein in this proliferation, Congress passed the National Emergencies Act in 1976. Under this law, the president still has complete discretion to issue an emergency declaration–but must specify in the declaration which powers he intends to use, issue public updates if he decides to invoke additional powers, and report to Congress on the government’s emergency-related expenditures every six months. The State of Emergency expires after a year unless the president renews it, and the Senate and the House must meet every six months while the emergency is in effect ‘to consider a vote’ on termination.

By any objective measure, the law has failed. Thirty states of emergency are in effect today–several times more than when the act was passed. Most have been renewed for years on end. And during the 40 years the law has been in place, Congress has not met even once, let alone every six months, to vote on whether to end them.

As a result, the president has access to emergency powers contained in 123 statutory provisions …. These laws address a broad range of matters, from military composition to agricultural exports to public contracts. For the most part, the president is free to use any of them; the National Emergencies Act doesn’t require that the powers invoked relate to the nature of the emergency. Even if the crisis at hand is, say, a nationwide crop blight, the president may activate the law that allows the secretary of transportation to requisition any privately owned vessel at sea.”

Goitein also points out that while “many of these tee up reasonable responses to genuine emergencies, some appear dangerously suited to a leader bent on amassing or retaining power. For instance the president can, with the flick of his pen, activate laws allowing him to shut down many kinds of electronic communications inside the United States or freeze Americans’ bank accounts.”

Trump is testing the waters with his national emergency. If it is upheld by the Supreme Court, he could invoke more powers than those related to the wall. Also his image with his base as a strongman who can get things done will be strengthened. He will be emboldened to use the emergency powers of the presidency in future situations.