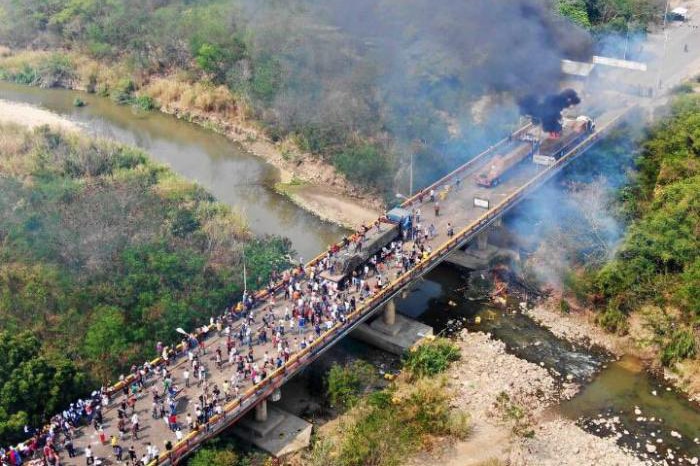 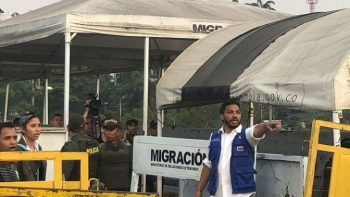 Simón Bolívar bridge at the Colombian Border. Venezuela faces a planned onslaught on the part of Colombian authorities following the whims of the U.S. empire, said Freddy Bernal, spokesman for the Bolivarian Government. | Photo: @madeleintlSUR.

On Saturday morning, February 23, a false positive was reported on the Colombian-Venezuelan border orchestrated by the Colombian government and Venezuelan opposition leaders, when two tanks of the Bolivarian National Guard (GNB) rammed the Venezuelan security barricade installed on the Simón Bolívar international bridge.

Following this act, three undercover terrorists fled to Colombia where they were received by two leaders of the Venezuelan ultra-right: former deputy opponent of justice José Manuel Olivares and the leader of the University of the Andes (ULA) Villca Fernández, both fugitives from Venezuelan justice.

“Don’t worry, these are ours,” officials said when they saw the infiltrators reach the Colombian side.

The TeleSUR correspondent at the site, Madeleine García, said that behind the security barrier there was a cordon of at least 30 Venezuelan police officers, one of whom was injured. A Chilean photographer was also injured in the attack. 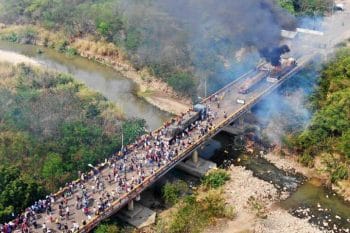 This attack comes after the government of Ivan Duque announced the closure of its borders prior to the delivery of “humanitarian aid” from United States and its allied governments without the authorization of the Venezuelan state.

The Venezuelan administration closed the bridges Simón Bolívar, Unión and Santander entirely and temporarily, citing ” serious and illegal threats made by the Colombian government against the peace and sovereignty of Venezuela”.

Regarding the false positive, the governor of the state of Táchira, Freddy Bernal, denounced that the government of President Duque is trying to damage the peace in Venezuela by carrying out the orders given by U.S. President Donald Trump:

With the complicity of the Colombian National Police, they threw fences into the Táchira River and tried to enter by force through the Simón Bolívar Bridge, but the Bolivarian National Police (PNB) acted quickly.

These days we said that the border was peaceful and continues to be peaceful, but the government of Iván Duque – from Colombia – along with Venezuelan traitors were going to mount a false positive and that was what they did this morning. We also want to denounce the fact that today what Guaidó – the deputy of the National Assembly in contempt and legal nullity, self-proclaimed president ‘in charge’ of Venezuela – said that the deaths did not matter, that was an investment

He pointed out that most Venezuelan officials are firm in the defense of the homeland and will not surrender to subordinate empires or government.

“We are here: a border of peace, a calm border, and we are moving forward with a Bolivarian celebration,” he remarked.

After the event, Venezuelan citizens arrived at the Simón Bolívar Bridge with messages in support of peace and the government of President Nicolás Maduro.

#VIDEO | Images that prove the links of the military who broke the border fence at the “Simón Bolívar” bridge with opponents José Manuel Olivares and Villca Fernandez.

The U.S. strategy against Venezuela includes a ” trinquete” of access points for supposed humanitarian aid, justification for military mobilization, and a provocation to Venezuelan national sovereignty.

The Venezuelan borders continue to be the focus of world public opinion as the scene of battles and political provocations against the threat of the opposition to force this Saturday a humanitarian channel supported by the United States.

The measure responds to the neighbouring country’s grave and illegal threats to peace and sovereignty, the vice president said on Twitter. 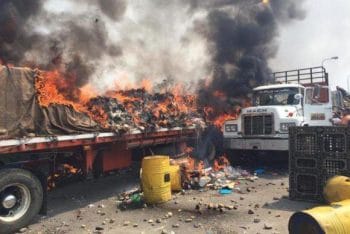 “We have the evidence that it is a false positive, it was shown that GNB did not participate in the act,” stressed the leader.

The destabilizing manoeuvres also include repeated messages to the armed forces to allow the entry of the humanitarian aid in question, as well as a Venezuela Aid Live concert outside Cúcuta, described by Caracas as a media show, reported Prensa Latina.

In statements to the press, Venezuelan Vice President Delcy Rodriguez reiterated that these shipments complement the plan organized by Washington to create an image of crisis in the country to justify an intervention.

For his part, Foreign Minister Jorge Arreaza warned that “the Bogotá authorities are offering their territory for this dangerous interventionist operation.

They are washing their hands ahead of acts of violence, reiterating the possibility of making false positives to blame the Bolivarian government, said the diplomat.

Videos of Madelein García, Telesur journalist, just at the moment when 3 members of the Bolivarian National Guard (GNB) desert stealing 2 VN-4 armoured vehicles (tanks) and using them to advance over fences on the Simón Bolívar international bridge, leaving two people injured, to be received by the opposition Vilca Fernández and José Manuel Olivares and members of Migración on the Colombian side.