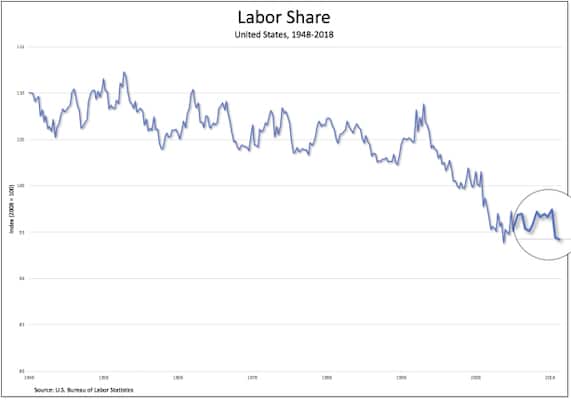 They keep promising, ever since the recovery from the Great Recession started more than eight years ago, that the share of national income going to American workers will finally begin to increase. But it’s not.

Sure, profits continue to rise. And so is the stock market. But not what workers receive.

In fact, as is clear from the magnified section of the chart above, the labor share has actually been declining in recent quarters—even as the unemployment rate has fallen about as far as it’s going to go.*

But you don’t have to believe me. Even the Wall Street Journal has noticed this trend.

Labor’s share of domestic income has been declining since 1970 and has barely recovered in this expansion from lows last seen when the U.S. was pulling out of the Great Depression.

Employee pay and benefits as a percentage of gross domestic income fell to 52.7% in last year’s third quarter, for the fourth straight quarterly decline, according to data from the Bureau of Economic Analysis. It was as high as 59% in 1970 and 57% in 2001. If workers were commanding as much of domestic income as they did in 2001, they’d have nearly $800 billion more in their pockets, or $5,100 per employed American.

While the labor share has fallen, business profits are on the rise. Income of corporations, proprietorships, landlords and other businesses has climbed from less than 12% of gross domestic income in the 1980s to more than 20%.

It’s time then to call out the hollowness of the promises that economic growth and low unemployment will lead to improvements for the nation’s workers. Clearly, both economists and politicians, conservatives as well as liberals, continue to make such pledges.

But those promises are as empty as hell—because, as the king’s son once declared, “all the devils are here.”

*And, as I explained back in 2017, the situation may be even worse for workers than the official numbers capture. That’s because the “labor share” doesn’t give an accurate picture of the “workers’ share” of national income—for two reasons: First, the labor share (as calculated by the Bureau of Labor Statistics) includes both employee compensation and the labor compensation of proprietors (and thus a portion, minus the capital share, of the income going to proprietors). Second, the labor share does not account for inequality between the different groups who receive what is officially measured as labor compensation. Thus, the compensation of a highly paid CEO and a low-wage worker are both included in the labor share.