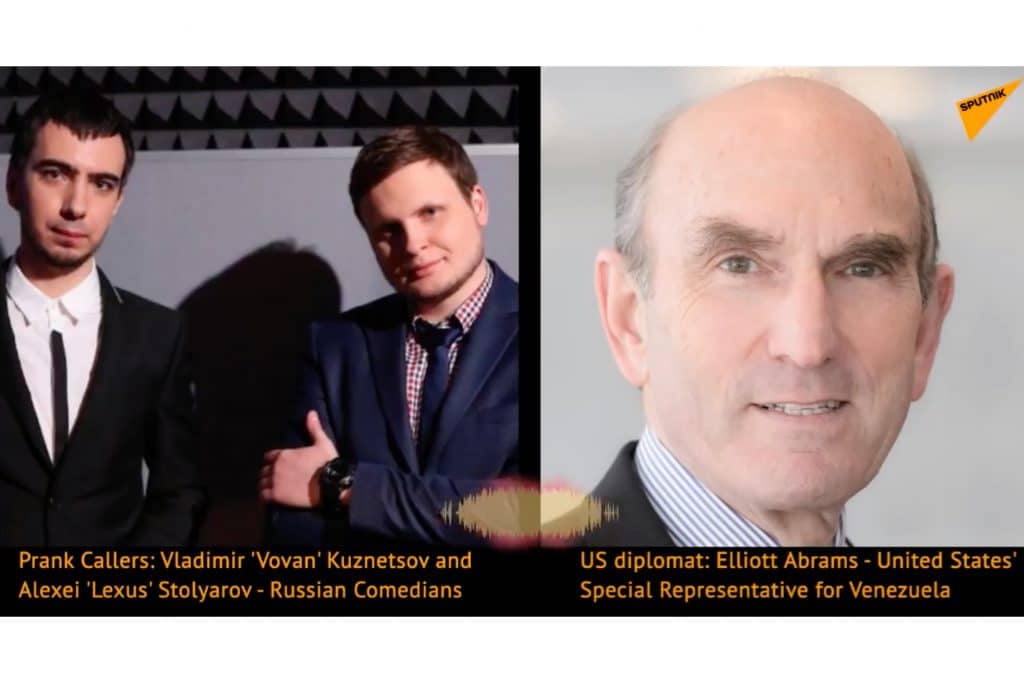 This is certainly one of the most hilarious—and poignant—pranks in recent memory given the utter failure of recent attempts to oust Venezuelan president, Nicolás Maduro. Vovan (Vladimir Kuznetsov) and Lexus (Alexei Stolyarov), the well-known Russian political pranksters, even coaxed their feckless target—U.S. Special Envoy to Venezuela, Elliott Abrams—into sending them all sorts of documents. Yes, Abrams fell for it completely. The full recording of the prank call (below) is a must listen.

Posing as Swiss President Ueli Maurer, who also serves as the country’s finance minister, the pranksters contacted Abrams on two occasions – in mid-February and early March, speaking to him for over 23 minutes about Swiss policy on the ongoing effort to freeze the Venezuelan government’s assets as part of broader plans to replace President Nicolas Maduro with U.S.-backed opposition leader Juan Guaido.

The highlight of the pair of conversations was when ‘Maurer’ asked Abrams about the chances of Washington following through with its threat to use military force to topple Maduro. Here is what he revealed:

“You know, we are not going to do that. Unless the regime does something completely crazy like attacking the U.S. embassy. But our information suggests that people in the regime and in the military are actually nervous about a U.S. invasion. And we think it is useful to keep them nervous, which is one reason why we will not say publicly ‘no, no, no, this will never happen.'”

“In private briefings to members of Congress, this is exactly what I say to them, [that] ‘we are not trying to make you in Congress nervous. We are trying to make the Venezuelan military nervous. And we think that it is a mistake tactically to give them endless reassurances that there will never be American military action.’ But I can tell you this is not what we’re doing. What we’re doing is what you see – financial pressure, economic pressure, diplomatic pressure, political pressure,” Abrams said.

Assuring Bern that the U.S. asset freezes against Venezuelan government-related entities and individuals were aimed at “just trying to preserve assets,” Abrams seemed particularly interested in Swiss efforts to block individual accounts, disclose their contents, and transfer them to Guaido’s allies.

“Tell me if you would about the confidentiality questions here. For example, if you meet next week with representatives of Guaido in the national assembly and you say to them ‘we have blocked this account or that account’, are they then free to not only access the account, but are they free to announce things?” Abrams asked.

When the pranksters assured him that the answer was ‘yes’, the representative said he “didn’t realise that,” adding that “that’s obviously great, frankly it’s a great help to Guiado.”

When asked by Abrams about the status of accounts belonging to Venezuela’s PDVSA state oil giant and other government accounts, the pranksters joked, posing as Maurer, that Swiss authorities knew about a number of Venezuelan accounts in Swiss banks, including one with a Russian connection known as “Limpopo Bank.”

The U.S. envoy didn’t pick up on it, but ‘Limpopo’ was a reference to Vovan and Lexus’s earlier trolling of U.S. Congresswoman Maxine Waters, who was pranked into accusing Russia of meddling in the elections of the fictional African country of ‘Limpopo.’

When asked for advice on how to Swiss regulators should act against Venezuelan accounts if no illegal activity was found, Abrams insisted that “everything should be frozen, absolutely frozen, just to make sure that they stay where they are. That’s our view.”

In what might be construed as a veiled threat, the Trump official also warned that because the U.S. and dozens of its allies have now declared that the “Maduro regime” is “an illegitimate regime,” there was now a “risk for any Swiss bank that hands those assets over.”

“There is the risk of future litigation from the future legitimate government of Venezuela that the bank allowed those assets to be, in essence, stolen,” Abrams explained. At this point, a diplomat from the U.S. embassy in Caracas who was also on the line chimed in, saying that even without litigation, dealing with Venezuelan government “comes with high reputational risks.”

In the latter phone call, when asked about the then-upcoming UN Security Council resolution on the Venezuela crisis, Abrams complained that despite support from nine of its members, he expected the Russians to veto the U.S. resolution, while adding that Washington was particularly interested in China’s stance.

“We are always interested in seeing whether the Chinese abstain or veto. Thus far, they have gone along with the Russians in vetoing, but their language is much more restrained, very different, very businesslike,” he said.

As may be expected, Vovan and Lexus’ conversation with Abrams garnered widespread attention in Latin America, including in Venezuela itself. On Wednesday, Venezuelan Communications Minister Jorge Rodriguez did a bit of trolling of his own on Twitter.

“They [the U.S.] are the most powerful empire on Earth, and a pair of Russian jokers are laughing in the face of this specialist in regime change…If it were not so tragic, it would be comical,” Rodriguez quipped.

Listen to the full audio of the pranksters’ conversations with Abrams here:

The State Department has yet to comment on the authenticity of the recordings.

Elliott Abrams is a veteran Reagan and Bush-era Latin America policy expert brought on board by the Trump White House in January amid the escalating political crisis in Venezuela. Abrams played a major role in the abortive coup attempt against Venezuelan President Hugo Chavez in 2002, and acted as a lobbyist and unofficial spokesman for U.S.-backed militias in Central America attempting to topple leftist governments in the region in the 1980s.