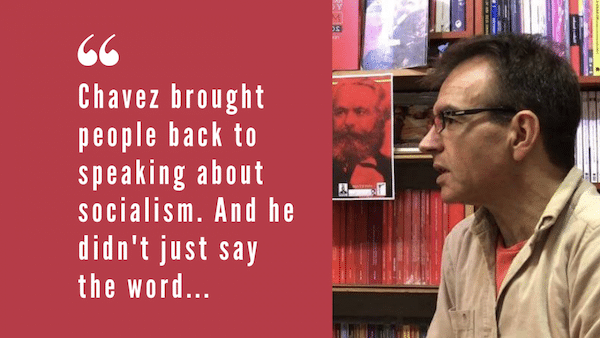 Nestor Kohan is a longtime militant and a philosophy professor at the Universidad de Buenos Aires. (Venezuelanalysis)

More than any other living thinker, Argentinian intellectual Nestor Kohan has worked to recover the tradition of Latin American revolutionary Marxism, a trajectory that he argues stretches from Julio Antonio Mella and Jose Carlos Mariategui to Che Guevara, Fidel Castro and Manuel Marulanda. Kohan has also developed a reading of Marx that considers commodity fetishism to be the centerpiece of Capital: Critique of Political Economy at the same time as it emphasizes the political and revolutionary character of all of Marx’s texts. Building on Part 1 of this exclusive interview with Venezuelanalysis, the dialogue that follows looks at alliance building and the contemporary struggle against fascism in Venezuela and elsewhere.

Recently, you wrote that the left today has no “Kremlin” and no “Vatican.” Still, some people now consider Russia and China to be models, or they look to those emerging powers for help. What kind of support can such countries provide to a socialist project, and what is it that we shouldn’t expect from them?

I believe there are no models. That is why I used the expression “we are without a Vatican.” It could also be expressed by saying that we don’t have a Mecca or we are without a great synagogue. In other words, we [on the left] are without a world reference point. That leaves us, to certain extent, orphaned from a theoretical and political standpoint. But it also has an advantage, because there is no need to subordinate ourselves to anybody. We don’t have to follow a strategy that has been cooked up and digested in another country. We have to elaborate our own revolutionary strategy.

In that sense, when you ask about the role of Russia and China, I would say that here we can appeal to the teachings of Marxism. Antonio Gramsci arrived to an important conclusion when FIAT workers struggled alone against their bosses. They lost their battle against capital. Gramsci expressed this conclusion both in the “Prison Notebooks” and even before he was imprisoned. He concluded: alliances are necessary, because if the revolutionary class struggles alone, it will lose.

When Gramsci dealt with the question of hegemony–that ideological, political, and cultural project which has to do with building alliances–he was systematizing Lenin’s concept of “social force.” Both Gramsci and Lenin were conscious of the need to build a revolutionary social force. We cannot depend on an individual. It’s not a question of President Maduro being either the new world leader or an incompetent person who cannot make the revolution go forward. That is a mistaken perspective. I think that if the Bolivarian Process triumphs with Nicolas Maduro at its head, it’s because it has a social force that accompanies him, drives him, and of which he is part. There is a long debate in Marxism about the role of the individual in history. The individual is very important, but one man alone cannot change history. Social forces must be built, and alliances must be established at a national and international level.

In this sense, there are two important historical examples to consider. In the 1960s, the Cuban Revolution confronted the US, and this was done through two levels of alliances. On the one hand, there were alliances made with the USSR, with which there were many differences and polemics on a theoretical, political and ideological level.

These contradictions went so far that the USSR even tried to organize a coup against Fidel Castro! It’s public knowledge by now, and it came from what was known as the “micro-fraction,” headed by a man named Anibal Escalante. It was an attempt to do a coup d’etat from within the Cuban Revolution from the Soviet side.

There were also conflicts during the Missile Crisis, when Nikita Khrushchev decided unilaterally to withdraw the missiles from Cuba, leaving Cuba unprotected when faced with the US’s voraciousness. Despite those conflicts, Fidel Castro and Che Guevara fostered alliances with the USSR, and with the countries that were friends of the Soviet Union. On the other hand, the Cuban Revolution also established alliances with the countries of the Non-Aligned Movement.

This is a very important historical precedent because sometimes you don’t have to share a hundred percent of the objectives with your allies. Yet if an alliance allows me to confront imperialism, then the alliance can be established. But an alliance should not be confused with the project itself. That is the key.

For the second historical example, we have to go back in time. It is the Latin American Independence Wars that took place at the beginning of the nineteenth century, headed up by Simon Bolivar in the continent’s north and by General San Martin in its south. Both leaders established alliances. For instance, they made alliances with the British Empire, which was a monstrous empire–colonialist and genocidal–but it was opposed to the Spanish empire, their main enemy.

None of the Latin American liberators–neither Bolivar nor San Martin, nor anyone else–believed that England would help out in a selfless or disinterested manner. It was a tactical alliance in the struggle against the Spanish empire, which was the principal enemy. However, it was completely distinct from the project of emancipation and independence. So, as far as Bolivar and San Martin’s projects of liberating indigenous people from serfdom and black people from slavery, in fact none of these projects was subordinated to the alliance with the British empire.

In other words, Bolivar and San Martin used international alliances at the beginning of the nineteenth century and the same thing happened during the Cuban revolution in the 1960s.

Nowadays, should we make alliances with China and Russia to put the brakes on Western imperialism, which is out of control? I believe it is legitimate to do so, because these alliances may give us some breathing space. They may counteract the US’s military power, which is superior to that of the Nazi empire. In fact, the Nazi empire was weak when compared with the US’s military power today.

Eisenhower identified a “military-industrial complex” and Paul Sweezy, Paul Baran, Leo Huberman, Harry Magdoff and other U.S. intellectuals analyzed what they called “military keynesianism.” That military-industrial complex, which needs permanent war to keep the economy going, is far more powerful than the Nazis were. To be able to confront it and stop our enemy’s advances, it’s valid to make alliances, not only with Russia and China, but also with countries of the Third World.

Does that mean that Russia and China should establish the political and ideological framework for our path forward? No, that shouldn’t be the case, because they are capitalist countries. The truth is that they have no interest in socialism. In China, the red flag is an empty symbol. Today China is not going towards socialism, and Russia ceased being socialist a long while back. In other words, a geopolitical strategic alliance shouldn’t be confused with our taking on their project as our project, because their objective has nothing to do with Latin American socialism. 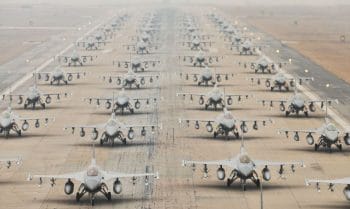 It’s obvious that the U.S. wants to seize Venezuela’s resources, but probably more important than that, it wants to bury Bolivarianism and eliminate everything it stood for. We are witnessing a kind of fascist mopping up operation aiming to discipline the working class so that it won’t rise up in the future. What do you think Chavez and the Bolivarianism stands for today? What makes those legacies so important and so dangerous?

Why does the U.S. attack Venezuela? I agree with what you said in the question. Everybody speaks about oil, but we should recall that President Chavez and the Bolivarian Revolution mobilized the whole continent and put the objective of socialism back on the agenda of social movements, which weren’t connected to the socialist project at that time. The Zapatistas never talked about socialism, and in all the World Social Forums nobody spoke about socialism either. They only criticized neoliberalism.

Chavez brought people back to speaking about socialism. And he didn’t just say the word. He tried to make strategic alliances; he created new institutions; he gave life to MERCOSUR, and the CELAC. Really, Chavez was a political force, what classical Marxism calls a “vanguard.” He headed up a process that has to be eliminated for that reason.

In was not for nothing that the Santa Fe Documents in the 1980s declared that Washington’s strategic enemy was Gramsci–i.e. liberation theology–and Simon Bolivar. But if Simon Bolivar was a historical figure who died in 1830, how could he be an enemy today? That’s because Bolivar is the ideological source of both the Colombian insurgency and Chavez’s Bolivarian Process.

Together, Venezuelan and the Colombian revolutionaries drew from Bolivarianism. Therefore both processes had to be finished off. They were obstacles for U.S. imperialism, with its project of installing military bases in the continent and reconquering its “backyard” in a time of world crisis.

Now the U.S. has managed to disarm the Colombian insurgency–letting that happen was a strategic and geopolitical error on the part of the popular forces–and they have managed to assassinate Chavez. (His assassination is something very probable, although nobody has the proofs. It’s very likely that they used the newest generation of biological weapons to put an end to Chavez’s leadership.) So, in that way, I think that U.S. hopes to regain control of their backyard, and take Venezuela’s oil resources, because it is one of the main oil producers worldwide.

But at the same time, they want to neutralize Chavez’s example as a leader and Venezuela’s vanguard role. It’s a role which wasn’t being played by Brazil, and couldn’t be played either Bolivia or Sandinismo. 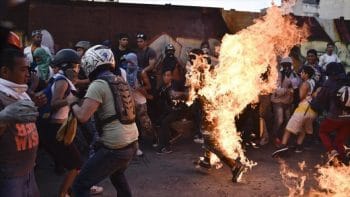 In June 2017, a mob of Venezuelan opposition protesters burned a man who they identified as Chavista. (Archive)

What is fascism? It’s a capitalist response that is not only confined to Venezuela, Colombia, or Brazil, but is rather a worldwide response. Faced with fascism, I think we need to retake the offensive spirit in the international revolutionary camp, which includes not only Marxists and communists, but also all the national liberation movements and all the anti-colonial and anti-imperialist struggles on a worldwide scale.

I think that’s what needs to be done. It’s not only about defending Bolivarian Venezuela, but rather confronting fascism everywhere, including in Europe, Africa and Asia. It’s about confronting imperialism on a worldwide scale. I think we have to retake the offensive, leaving behind fear.

I am referring not only to fear of physical death and invasion, but also the fear that operates in the ideological sphere. For example, the fear of using powerful concepts like colonialism, imperialism, exploitation, dependency, and super-exploitation. I think we need to overcome not only physical fear but ideological fear (which leads to) the ideological disarming and the “social-democratization” of Marxism.

How many Marxists speak of Marx but in practice act like social democrats! That’s an obstacle to advancing and to being able to respond to fascism. I think that the postmodern void can be filled either with fascism or with revolutionary Marxism and a revolution that moves toward socialism and communism. I think that the postmodern void has to be criticised, and one has to confront fascism by recovering the best of the revolutionary tradition.