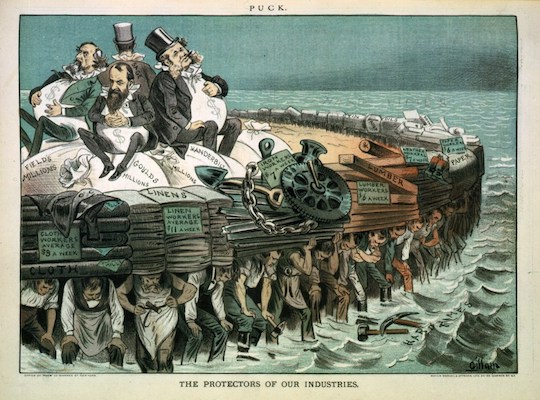 A political cartoon from 1883, depecting four notable Robber Barons being supported by their workers. Is this image a hate crime? Will it be described as such soon?

Rhetoric about the 1 per cent and economic inequality has the same underlying theme–anti-capitalism masks and normalises anti-Semitism.

The above quote appeared in the Financial Times over the weekend. It is a piece of twisted logic, designed to demonise an entire political movement. And it is a lie, BUT it does tell an important truth, it just does it by accident.

Namely–that “antisemitism” in Labour is a political invention, used to curb a popular movement against corruption, austerity and growing inequality.

Labour doesn’t have an antisemitism crisis. It doesn’t need to “listen more” or “try harder”. It isn’t toxic. Or racist. Or full of bullies. None of that is true. 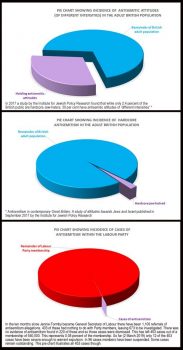 Nobody is denying antisemites exists. There’s a small minority of people who hate Jews just for being Jews. This is unfortunate, but also true of every race, sexual orientation and religion. Everybody, somewhere, has someone who hates them for what they are. The problem is relatively small, and in the Labour party, it’s even smaller than in the general public. This graph was brought to our attention on twitter:

Study it. Memorise the statistic. 0.08%. Less than one in 10,000–and even that is a generous estimation. It could easily be far, far lower. That’s not a problem. It’s not even a taint. It is a problem so small that making it a priority is absurd. The statistics prove it.

The counter to these statistics? Nothing. Those who claim Labour is “institutionally antisemitic” present no evidence but anecdote. Apparently, Luciana Berger had people abuse her on twitter–not one of them is proven to have any link to the Labour party. Journalists say “a Jewish friend told me X”, a lot. A poll comes out that “British Jews might leave” if Corbyn were PM. None of that is evidence of anything.

Even the specific cases never stand up to scrutiny–let’s look at the big four:

#1 Marc Wadsworth – Wadsworth was kicked out of Labour for “bringing the party into disrepute” by spreading “antisemitic conspiracy theories”. This is his allegedly antisemitic statement:

I saw that the Telegraph handed a copy of a press release to Ruth Smeeth MP so you can see who is working hand in hand.

Accusing some Blairite MP of working with right-wing media to undermine Corbyn is not antisemitic just because the MP happens to be Jewish.

The mural is not antisemitic–Mear One, the artist, said so himself, here are his exact words on the matter:

It was also [the media’s] interpretation, and never mine, to point out “hook noses” “crooked noses” and other vile Nazi, Third Reich anti-Semitic propaganda, even concocting cuckoo ideas like how the naked figures under the monopoly board depicted “starving holocaust victims” when they actually represent the multi-races of humanity! As a thinking feeling human being to hear such stuff makes me sick to my stomach.

The people sitting around that table, far from being “Jewish caricatures” the media pretended they were, are specifically named in Mear One’s open letter to the media:

I chose to depict the likenesses of such early turn of the century Robber Barons, specifically Rothschild, Rockefeller, Morgan, Carnegie, Warburg, as well Aleister Crowley who was a kind of philosophical guru to the ruling elite of that time and a well-known Satanist.

Carnegie, Morgan, Rothschild, Rockefeller, Warburg and Aleister Crowley(?). Five billionaires and a Satanist. Out of the six of them, only two were Jewish. (In fact, the only person included in the mural because of their religion is Crowley. So really it’s an anti-Satanic mural).

If you look at that and say “they must be Jewish because of the noses”, like this TV reporter did, well then YOU are being anti-semitic.

#3 “Hitler was a Zionist”–Ken Livingstone claiming that it was policy, in the early years of Nazi Germany, to support Zionism was not antisemitic. He was referencing a very specific historical fact–some Zionists did strike a deal with Hitler to relocate German Jews to Palestine. It was called the Haavara Agreement and it happened. It is a fact.

The best and clearest evidence for this is the fact many Jews support Corbyn, and defend him, and his party, against these accusations.

The second best evidence is the readiness with which the media (many of them non-Jews), ignore, vilify, victimise, bully and smear these brave people:

Michael Segalov is a Jewish journalist, and Labour member, who has repeatedly stood up for Corbyn and Labour both. He was branded a “self-hating Jew” by Dangerous Hero author Tom Bower.

Two-hundred Jewish intellectuals and public figures signed and open letter defending the Labour party against charges of institutional racism. They were ignored, they have no part in the official narrative.

Jeremy Corbyn attended a Seder event with a group of Jews in his constituency last year–he was criticised for “Jew baiting”. the Jews he was with were, apparently the “wrong kind of Jew”, according to John Woodcock. Angela “Funny Tinge” Smith called it “a blatant dismissal of the need to tackle antisemitism.” Neither Woodcock nor Smith are Jewish.

The group with which Corbyn celebrated Passover is called Jewdas, they are a left-wing Jewish group who protest the crimes of Israel and fight for (among other things) Palestinian rights. Woodcock and Smith are both members of the Labour Friends of Israel.

Corbyn has vowed that his Labour government would recognise an independent Palestinian state, and immediately halt all arms sales to the Israeli government.

But is this really just about Israel? I would say no. It’s about something bigger. Something more all-encompassing than that. In fact, by blaming Israel I think we play straight into the hands of those seeking to turn this into a discussion about race or religion. It is not about either. It is old fashioned left vs right.

Look, when Jenny Manson of JVL backs Williamson she is speaking for the kind of Jews that Corbyn believes are the best socialists. This is not some unfortunate situation to be regretted folks, it's built-in.

He makes it plain–this is not a Jewish issue. Jenny Manson is Jewish. Her organization is Jewish…her politics are left-wing. And therein lies the problem.

This isn’t about Jews. It was never about Jews. That has been my position from the beginning. What’s different now, is that the other side has finally admitted it: This is about socialism. That’s been made obvious just in the last few days.

And so we circle back to John McTernan’s piece in the Financial Times, headlined “Labour’s mistake is to believe there are no enemies to the left”. His argument is that [our emphasis]:

All of these [anti-semitic tropes] feature in the criticism of Israel and the so-called Israel lobby. They can easily be moulded into a critique of capitalism too. Rhetoric about the 1 per cent and economic inequality has the same underlying theme…So anti-capitalism masks and normalises anti-Semitism.

John Harris’ article is similarly headlined: “The unanswered question: why do antisemites think Labour is the party for them?”, and is in all other ways nearly identical. Right down to the almost copy-and-paste anecdotes of conversations with anonymous “Jewish Labour members”. One of his final arguments:

[The Labour Party] now tends to present the very real failings of modern capitalism not as a matter of anything systemic, but the work of a small group of people who are ruining things for the rest: what Corbyn calls a “self-serving elite”, who “monopolise the wealth that should be shared by each and every one of us”.

You see, it’s not being “antisemitic” that’s the issue–it’s being anti-capitalist. We can’t attack the elite, because they are a minority. This opinion has been expressed in many other places.

The (privately-owned) “grass-roots” movement Momentum released this video a few days ago. It is factually incorrect in many areas (for one thing, not all Central Banks are “state enterprises”), but more importantly it sells a huge lie in an effort to stifle debate: It says criticism of the Rothschilds, globalism, “corrupt bankers”, George Soros and Zionists means buying into “antisemitic conspiracy theories”. That is, of course, nonsense.

“Labour” MP Siobhan McDonagh argued that being antisemitic is an inherent part of anti-capitalist ideology, in a BBC Radio 4 interview on Monday morning.

It is even hinted at in the UK’s newest “political party”–The Independent Group. Chuka Umunna, the de facto leader via the small miracle of somehow being the most charismatic in a group of 11 people, told the New Statesman:

Arch-capitlalist and ad-man extraordinaire Don Draper’s most famous quote is “If you don’t like what’s being said, change the conversation.”

That is what is going on here. Wealth redistribution is being rebranded as antisemitism. Criticising billionaires is now “prejudice against people of means”. Blaming the rich 1% will be called “hate speech”.

The media haven’t turned against Corbyn’s Labour party because of antisemitism–they have invented antisemitism as a reason to turn against the only mainstream party dedicated to ending austerity and implementing socialist politics.

This, in a nutshell, is the whole purpose of identity politics–to distract, divide and disenfranchise. A sudden, violent narrowing of the Overton window to protect the super-rich from the fully justified anger of the working class. The end product of all this talk about race and gender and privilege is, to quote Jonathan Pie, “Thatcherism with diversity quotas”. A world of perpetual neo-liberal austerity, and a mass of cowed citizens afraid of complaining for fear of being convicted of a hate crime.

And the more we talk about this fictional antisemitism, the more they win.

Kit Knightly is co-editor of OffGuardian. The Guardian banned him from commenting. Twice. He used to write for fun, but now he’s forced to out of a near-permanent sense of outrage.