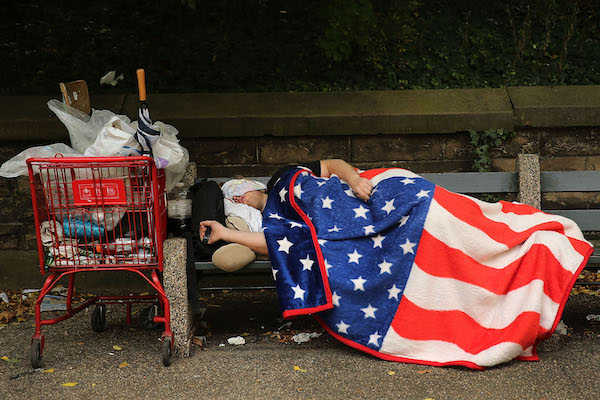 Under the guise of ‘humanitarian aid’ and the struggle for ‘democracy’, the United States has justified dozens of military and political interventions in the world during the 20th and 21st centuries. In their most recent campaign they have focused on Venezuela as part of a strategy to undermine progressive governments in the region.

With coordinated media manipulation, economic blockade and diplomatic pressure, the imperialist offensive on the Latin American nation has been going on for more than a decade. They have branded the Venezuelan government a ”dictatorship”, presenting it as a ”failed state” plunged into social chaos, with high rates of poverty, malnutrition, and insecurity; arguing that the cause is the progressive model and not exogenous factors such as international discrediting or blockade.

The American situation is highly worrying and qualifies the nation to be a suitable recipient of ‘humanitarian aid’ made in the USA. According to a report by Philip Alston, special rapporteur of the United Nations (UN) on extreme poverty and human rights it was revealed that by 2018, 40 million people in the United States live in poverty, 18.5 million live in extreme poverty and more than five million live in conditions of absolute poverty.

The country has the highest youth poverty rate in the Organization for Economic Cooperation and Development (OECD) and the highest infant mortality rate among comparable states in this group. Not surprisingly, Alston described the country as the most unequal society in the developed world.

No wonder the United States can no longer be called a “first world” nation. According to a study by the Massachusetts Institute of Technology (MIT), for the majority of its citizens, approximately 80% of the population, the United States is a nation comparable to the “third world”.

To arrive at this conclusion, economists applied the model of Arthur Lewis, Nobel laureate in economics (1979), which was designed to understand what factors characterize a developing country and how to classify it.

According to Peter Temin, co-author of the study, America follows this model: is a dual economy (an incomparable gap between a small part of the population and the vast majority) in which the low-wage sector has little influence over public policy; a high-income sector keeps wages low in the other sector to provide cheap labor; a societal control that is used to prevent the low-wage sector from challenging policies that favour the high-income sector; high rates of incarceration; public policies of the wealthier sectors aimed at reducing taxes for that group; and a society where social and economic mobility is low.

This is especially relevant when one of the main arguments for aggressions is the supposed ‘welfare’ and human rights of citizens. Again Americans should first see the ‘beam in their own eye’.

According to a three-yearly analysis of the Commonwealth Fund (2017), the United States, for the sixth consecutive time, ranks as the worst health system among 11 developed nations. They have the most expensive health care system on the planet, with an annual expenditure of three trillion dollars, which translates into one of the countries with the greatest disparity in access to health care, based on income.

Meanwhile, life expectancy in the United States declined for the third consecutive year to 78.1 years. A decline comparable to the period of 1915 and 1918, when the United States faced a World War and the global influenza pandemic. In comparison, Cuba, which is part of the ‘Troika of Tyranny,’ according to John Bolton (National Security Advisor) has a life expectancy of 79.74 years for 2018.

And in terms of education. From 1990 to 2016, the United States fell from sixth place to twenty-seventh, making it one of the worst education systems in the ‘developed’ world. With public spending that fell between 2010 and 2014 by 3%, while developed economies investment grew by over 25%.

A deteriorated well-being of life, an expensive and inequitable health system and an education that does not compare with other developed nations. If this is not enough for the U.S. government and the rest of the West to decide to intervene, then constant human rights violations must be a cause for mobilizing troops to the border and initiating a military intervention.

The United States has systematically directed or influenced interventions in Latin America and the rest of the global South. The most recent covert operations, ethnic wars and military invasions are proof of the ‘license to kill’ that has been assigned to this country.

Prisons where human rights are violated such as Guantánamo and Abu Ghraib are but a few examples of this reality. People such as Gina Haspel, who was directly involved in the U.S. government’s torture program, have risen to positions of world power as director of the Central Intelligence Agency (CIA).

But the clearest transgression is the withdrawal from the UN Human Rights Council, an international body charged with ensuring that such violations do not happen. A decision that came days after the High Commissioner for Human Rights denounced the current administration’s practice of forcibly separating migrant children from their parents and imprisoning them in what can only be called modern concentration camps.

Domestically, police accountability for the use of excessive force has been reduced, especially in black and Latino communities. The systematic killing of black men in the United States by this use of excessive force, according to a Boston University study, reflects an underlying structural racism in American society, which is also reflected in a biased justice system against black communities.

“If the police patrolled the white areas as they do in poor black neighborhoods, there would be a revolution,” says Paul Butler, author of Chokehold: Policing Black Men, which recounts what it means to be a black man in the United States.

Such human rights violations are the daily reality for ethnic minorities and historically discriminated groups. This is coupled with the strengthening of fascist-leaning groups, which have the direct and indirect support of central and local government in several states. A worrying scenario for millions of black, Latino and other ethnic citizens.

However, the false ‘concern’ for Venezuela, Libya, Syria, Iraq, Yemen, Afghanistan, and Ukraine, in the last two decades alone, has guided invasions and aggressions in the name of welfare and human rights. Actions that in turn conceal ulterior interests that are based on an indicator in which the United States is ranked number one: military spending.

As of 2019, the United States has a military budget of over 680 billion dollars, more than the combined budgets of the seven nations that follow on the list: China, Russia, Saudi Arabia, India, France, the United Kingdom and Japan.

Not even in economic freedom ( 12 in the world ) are they leaders in growth of GDP ( 147 out of 224 countries ); which is a reflection of a reality. The United States is a military empire, its economy is based on war, and no action taken in the name of ‘humanitarian aid’ is meaningful when its government’s interest is to promote chaos for its own benefit.

Against this background what the world is experiencing is a drowning kick from a declining superpower. That is why it is trying so desperately to cling to the last bastion of influence that remains Latin America, ergo its fixation with Venezuela and other nations in the region. For if it were a question of real aid, it is time for the United States to seriously consider intervening, with the same intensity, in its own country.