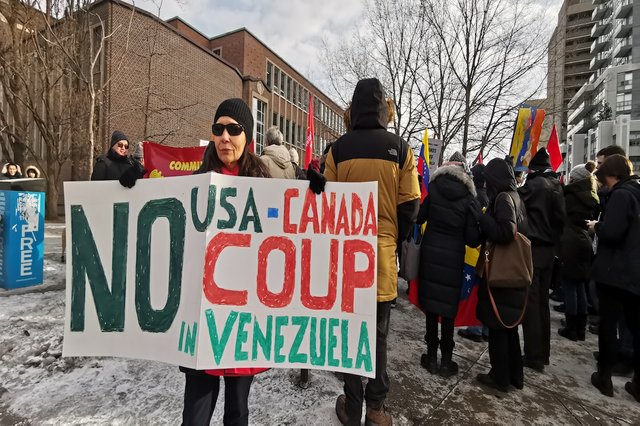 Protestor with the sign, “No US-Canada Coup in Venezuela.” Photo credit: Christian Peña.

The call to depose the government of Venezuela by governments throughout the Western Hemisphere and European Union was unsurprising. In Canada and the United States, corporate funded media (which include the CBC and PBS) have characterized the turmoil in Venezuela as an international effort to support a humanitarian struggle against an intransigent dictatorship. Independently funded media outlets such as Democracy Now! and The Intercept have reported facts which question this view for example; the many appeals to Western powers by Bolivia, Cuba, the English speaking Caribbean, India, Iran, Mexico, Russia, South Africa, Turkey, Uruguay and the Vatican to forego an agenda focussed on regime change; the Red Cross and United Nations characterization of U.S. Aid efforts in Venezuela as politicized; the numerous public threats directed at President Nicolas Maduro by neighbouring countries; and most importantly, the levels of domestic support for the governing party within Venezuela which almost guarantees a civil-war should there be a forced removal of Maduro’s government. Regardless of how nuanced such reporting has been, the many facets of the prolonged and dynamic political crisis engulfing Venezuela has made it difficult to address the degree of imperialism at play in Venezuela (it’s instructive to brush up on the definition). However, the current Canadian political scandal unfolding around alleged government intervention to protect a company by the name of SNC-Lavalin has been useful to make sense of this issue.

How Canada does it

Prior to the Canadian government’s recognition of Juan Guaido, simultaneously as both leader of Venezuela’s opposition and new President of the country, not many people within Canada would have known their government had spent the previous eighteen months coordinating a coalition of illiberal Central and South American countries to do the same or that Canadian interests in Venezuela and the region go beyond tourism.

For the past twenty years, Canadian based banks, mining and oil & gas companies have seen their investments diminish as the Venezuelan government systematically purchased their stakes in its drive to nationalize the country’s natural resources sector. While Canadian companies specializing in resource extraction have had to pack up, SNC-Lavalin had been doing well for itself over the same period. The company routinely secured multiple multi-year contracts to build infrastructure and provide maintenance services in Venezuela’s oil & gas sector.

Although SNC-Lavalin is described as an engineering and construction business, such a depiction belies the enormous political influence and power the company wields within Canada and on the global stage. A more apt comparison would be to Halliburton in the United States, for those who recall its ties to former U.S. Vice-President Dick Cheney and its role in the American invasion of Iraq. Indeed, the reason SNC-Lavalin has recently catapulted to top-spot in the Canadian news cycle is because of allegations that high-level officials in the Canadian government intervened to shield the company from an impending criminal prosecution over its practices in Libya prior to the Canadian-supported overthrow of Muammar Gaddafi.

In very simplistic terms, governments of resource-rich countries throughout the global-South strike deals with companies the calibre of SNC-Lavalin to ward off foreign intervention. The rationale is to allow such companies to be economically invested to a point where they will actively dissuade their respective governments from engaging in any overt conflict. For socialist-minded governments, mandated to equitably re-order the societies they were elected by, it’s a strategy to ensure some degree of autonomy from the economic forces of the free-market. The alternative is to maintain an economy under rules which effectively allow foreign capital to manage the country’s assets.

In the case of Venezuela, the government successfully established the political space needed to utilize commodity prices to halve the country’s poverty rate between the years 2005 and 2013. The distribution of Venezuela’s wealth, based on socialist economic principles, also allowed for the government of Venezuela to fund social development projects throughout Latin America and the Caribbean. However, this economic model proved to be temporary as the Venezuelan economy collapsed under the combined weight of years of: declining oil export revenues, increasing debt obligations to creditors, private sector sabotage of domestic food production, U.S. economic sanctions on government owned enterprises, to say nothing of the resulting corruption and mismanagement within the Venezuelan bureaucracy. By 2017 payments to SNC-Lavalin and other companies ceased and Canadian sanctions on Venezuela followed soon afterwards. For SNC-Lavalin, the final break with Venezuela came in the form of a lawsuit which paved the way for it and other companies to lay claim to Venezuela’s oil industry.

The demise of SNC-Lavalin’s relationship with the government of Venezuela is not what has placed the country in the literal cross-hairs of Western powers. The relationship, however, does provide an example of how advanced-capitalist states extend their influence over governments of resource-rich countries throughout the global-South. The current Canadian political scandal alleging government intervention to protect SNC-Lavalin has the potential to expose the company’s multifaceted links to the various agencies, departments and people making up the Canadian state. Just below the surface are larger questions around the reason’s companies receive political protection. Justifications for protecting the employment of thousands of workers are difficult to refute, however, the history of financial support from SNC-Lavalin for the electoral campaigns of the current governing party in Canada easily calls that into question.

Indeed, the timing of the scandal is note worthy. It has emerged in an election year where, in eight months, the centrist Liberal Party of Canada will be put to an electoral test. An electoral focus on the ties between corporations and the Liberals will hopefully lead to a discussion about the broader context of Canadian capitalism, often seen only through the lens of corporate bailouts, and imperialism.

Faiz Ahmed is a socialist living in Toronto, Ontario. He is a contributor to Leftnews.org