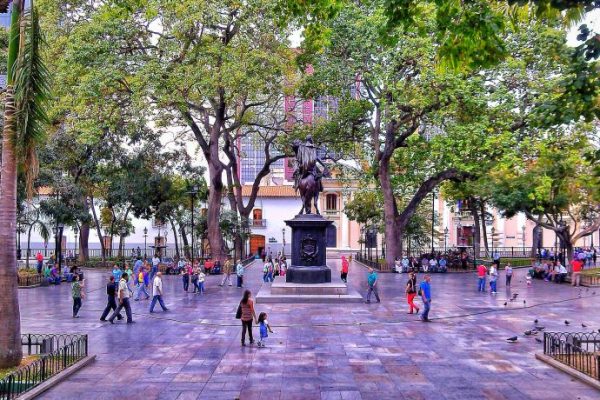 While this piece by Alfred de Zayas was written a year ago, it is most certainly still relevant today. —Eds

Regardless what interventionist politicians, the media and some non-governmental organizations affirm, the situation in Venezuela does not reach the level of a “humanitarian crisis”.  True enough, there is scarcity of certain foods, medicines and personal hygiene items, there are delays in distribution, there are long lines for rationed foods, there is galloping inflation, there is anguish, zozobra, there are institutional and constitutional irregularities (like in so many countries of our suffering world!)  — but hyperboles do not help us or the Venezuelan people, who need international solidarity and good faith humanitarian assistance.

The “crisis” in Venezuela is an economic crisis, which, however, is far from a “humanitarian crisis” as we know from Gaza,[1] Yemen, Libya, Syria,  Iraq, Haiti, Mali, Central African Republic, Sudan, Somalia, and Myanmar.

It is significant that when in 2017 Venezuela requested medical aid from the Global Fund, the plea was rejected, because it “is still a high income country…and as such is not eligible.”[2]

During my eight-day visit to Venezuela, I discussed the issues of food and medicine scarcity with experts from FAO and CEPAL.  The December 2017 FAO report and its March 2018 report  Sistema mundial de información y alerta, lists a total of 37 countries in need of external assistance. Venezuela is not among them.

Thanks to UNDP, we were able to convene a meeting with all UN agencies and other regional organizations operating in Venezuela with a view to coordinate advisory services and technical assistance, an initiative that bore fruit shortly thereafter In this context, it is also useful to recall the situation in Venezuela in the years prior to the election of Hugo Chavez, when the IMF restructuring programs including radical austerity measures and privatization of public services, including electricity, led to extreme poverty and social unrest, culminating in mass public demonstrations and the governmental military response, known as the Caracazo of 1989, which left some 3,000 massacred peasants.  The election of Hugo Chavez in 1998 was an expression of despair with the neo-liberal policies of the 80’s and 90’s, a democratic choice reflecting profound popular discontent with the ubiquitous corruption and the enormous gulf between the super-rich and the abject poor.  In 1998, the Inter-American Commission on Human Rights condemned the Caracazo and other actions of the Carlos Andres Perez government, referring the case to the Inter-American Court, which in 1999 held that the Perez government had violated the American Convention, and committed extrajudicial killings. The Venezuelan government, by then headed by Chávez, did not contest the findings and accepted full responsibility for actions of the prior government.

What are the causes of today’s economic crisis in Venezuela? The mainstream media would have us believe that it is attributable exclusively to the failure of the socialistic model … too many ideologues, too few technocrats, amateurs who do not know how to run the economy. Others have put the emphasis on corruption, which was also a major problem in pre-Chavez Venezuela.  Even if there is some truth to that, and the Attorney General has launched a robust anti-corruption campaign,  other factors weigh in, notably the fall of oil prices, Venezuela’s principal source of income.  Seldom do we read in the media about the economic war being waged against Venezuela since 1998, the internationally-inspired coup in 2002, sabotage of the economy by monopolies and the private sector, hoarding of foods and medicines to be resold in the black market, an enormous level of contraband of subsidized foods and medicines into Colombia, Brazil and Aruba, and the effects of Obama and Trump sanctions, sanctions by Canada and the European Union, all of which have aggravated the suffering of the Venezuelan people.  To the extent that sanctions have directly and indirectly caused shortages in necessary medicines such as insulin and anti-malaria drugs, to the extent that sanctions have caused delays in distribution and thus contributed to many deaths – sanctions must be condemned as a crime against humanity.  Already a 2000 report by the United Nations Sub-Commission on the Promotion and Protection of Human Rights condemned sanctions as a gross violation of human rights. (See “Adverse consequences of economic sanctions,” OHCHR Documents, 18/8/2000, E/CN.4/SUB.2/RES/2000/25.)  And in the 1990’s two United Nations Assistant Secretary-Generals, Denis Halliday and Hans-Christof von Sponeck[3] resigned their “Humanitarian Coordinator” posts in Iraq in protest against sanctions which had caused more than a million deaths among the population, in particular children, and which they qualified as a form of “genocide”.

Although the Venezuelan Government is endeavouring to diversify the economy to reduce dependence on oil, it has encountered difficulties e.g. in importing seeds to increase its local agricultural production, and it is clear that it needs international assistance to produce its own generic medicines.  In the light of the high level of sabotage and contraband, the UN Vienna Office on Drug and Crime should assist the Venezuelan government in tackling the international mafias operating in the region.

Professor Pasqualina Curcio of the University of Caracas published a book 2017, The visible hand of the market, which analyses the economic war, and reminds us that in 1970, when Salvador Allende was democratically elected President of Chile,  Richard Nixon told Henry Kissinger that the US would not tolerate an alternative economic model in Latin America and gave orders “to make the Chilean economy scream”, and when all the boycotts and sanctions failed, Allende was removed by Pinochet’s coup in September 1973.[4] The Spanish economist Dr. Alfredo Serrano, head of the Centro Estratégico Latinoamericano de Geopolítica, analyses inter alia  the artificially induced inflation, the arbitrary “Dollar today” figures, the manipulation of the “country risk factor” the refusal of banks to process Venezuela’s international transactions, the obstacles to obtain insulin and other medicines, the closing of Venezuela’s bank accounts by Citibank, Commerzbank, Deutsche Bank among others.

Colombia’s refusal to deliver anti-malaria medicine that had been ordered to combat an outbreak in November 2017, as well as the absence of condemnation from the international community, manifests culpable responsibility for the aggravation of the crisis in Venezuela.  Moreover, the absence of fairness and objectivity seems to indicate that the international community has turned its back on the suffering of the Venezuelan people and seems to be interested only in inducing “regime change.” The anti-malaria medicine had to be imported from India and the Venezuelan government ensured its immediate distribution – at predictably higher cost.

Countries that continue to wage economic war against Venezuela are estopped from screaming “humanitarian crisis”, because they themselves are main contributors to the problem. Ex injuria non oritur jus.

To solve the immediate problems Venezuela needs facilitated entry of medicines and food, without strings attached.  The United Nations should focus its efforts on promoting dialogue between the Government and the opposition.  Alas, it is the opposition that has been asking the United States and others to intensify the economic war against Venezuela, and hence the negotiations conducted between the government and the opposition in the Dominican Republic, supported by the former Prime Minister of Spain Rodriguez Zapatero, advanced to a balanced document that should have been signed by all sides on 7 February 2018. The Venezuelan government signed. But, as has been reported in the press, a phone call from Colombia frustrated the two-year process of negotiation with a “No firme.”  Who gave the order?  Thus, it becomes evident that certain countries do not want to see a peaceful solution of the Venezuelan conflict, but prefer to prolong the suffering of the Venezuelan people, perhaps in the expectation that the Venezuelans will rebel against Maduro and express this through a “voto castigo” (vote to punish),  or that conditions will further degrade so as to reach the “humanitarian crisis” threshold, which could be invoked in order to conduct a military intervention and impose regime change.  Classical Machiavellism.

Related to the concept of “humanitarian intervention” (which, for instance could legitimately have been practised to stop the democide in Cambodia and the genocide in Rwanda) is the newer concept of “responsibility to protect”, an elastic doctrine which could be invoked – wrongly – to march in.  Obviously, what some commentators would like is R2P to overthrow certain governments like in Grenada in 1983, Panama 1989 or the anti-Sandinista campaign condemned by the ICJ in its Judgment in the Nicaragua v. United States case.  It should be remembered, however, that R2P is a “declaration” and cannot replace the jus cogens prohibition of the use of force contained in article 2(4) of the UN Charter.  Under no condition can a State invoke R2P without Security Council approval. And yet, the increased sabre-rattling gives rise to international concern.  Any foreign military intervention in Venezuela would constitute aggression within the meaning of the ICC Kampala definition of the crime of aggression.  Government officials associated with the planning or executing such aggression should be indicted pursuant to the ICC statute.  I have sympathy with another R2P – the responsibility to prevent violence, and this can best be achieved by providing genuine humanitarian assistance without ulterior political agendas.

Bottom line:  Venezuela is a sovereign people with the right of self-determination stipulated in common article 1 of the International Covenant on Civil and Political Rights and on Economic, Social and Cultural Rights. Both Chavez and Maduro were democratically elected in elections monitored by international observers, including the Carter Center.  If we are committed to democracy, we must respect their choice.  After all, the Outcome document of the 2005 World Summit was clear in reaffirming that “democracy is a universal value based on the freely expressed will of people to determine their political, economic, social and cultural systems and their full participation in all aspects of their lives.” The Summit Outcome Document also stressed that “democracy, development and respect for human rights and fundamental freedoms are interdependent and mutually reinforcing,” and pointed out that “while democracies share common features, there is no single model of democracy.”

The solution of the Venezuelan “crisis” lies in good faith negotiations between the government and the opposition, an end to the economic war, and the lifting of sanctions.   In pursuance of the principle of international solidarity,  UN agencies should provide advisory services and technical assistance to the Venezuelan government, and rich States should facilitate humanitarian assistance in coordination with neutral organizations as the International Committee of the Red Cross.    The priority today must be to help the Venezuelan people while respecting the sovereignty of the Venezuelan State. My report to the Human Rights Council proposes constructive solutions.

[4] Peter Kornbluh, The Pinochet File: A Declassified Dossier on Atrocity and Accountability (A National Security Archive Book. The New Press, 2003).

Alfred Maurice de Zayas (@Alfreddezayas), also known as Alfred de Zayas, is an American lawyer, writer, historian, and a leading expert in the field of human rights and international law. de Zayas became a staff member of what was then the United Nations (UN) Division of Human Rights in 1981. After 22 years as a UN lawyer he took early retirement in order to teach and write. From 2012 until April 2018, he was the UN Independent Expert on the Promotion of a Democratic and Equitable International Order (also known as Special Rapporteur), appointed by the UN Human Rights Council. He blogs at Alfred de Zayas' Human Rights Corner.
View all posts by Alfred de Zayas →

Dossier 14: Brazil’s Amazon—the wealth of the earth generates the poverty of humankind
Russiagate implodes, pleasing Trump but leaving the left in the cold