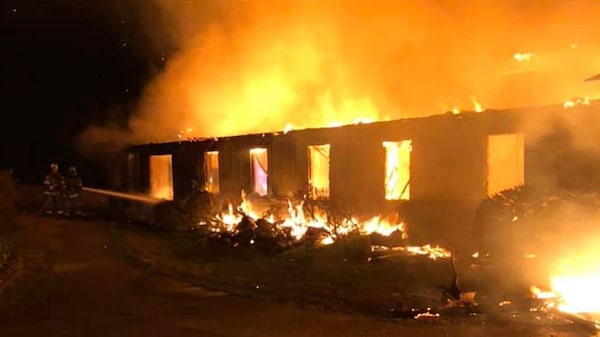 The center serves as “an adult education center for community workers involved in social and economic justice movements,” according to language posted to the group’s Facebook page, and once played host to such civil rights icons as Martin Luther King Jr. and Rosa Parks.

A representative from the Jefferson County Sheriff’s Office told Hatewatch on Monday that they were working with the Tennessee State Fire Marshal’s Office to determine the cause of the fire. They said they hope to share more information in the coming days.

But a statement issued by the center Tuesday added an unpleasant layer of intrigue to the center’s misfortune – overtly suggesting that the fire may have been an act of arson.

“As most of you know, a devastating fire burned down our main office early Friday morning. Thankfully no one was inside the building and no one was injured,” a statement from the center reads.

“While we do not know the names of the culprits, we know that the white power movement has been increasing and consolidating power across the South, across this nation, and globally,” the statement continues.

Hatewatch reached out to the center for more information about the symbol they said was spray-painted at the scene of the blaze but did not immediately receive a response.

The Southern Poverty Law Center’s own analysis backs up the Highlander Center’s statement about gains made by the white supremacist movement. SPLC has found that the number of hate groups in the U.S. has surged alongside the rise of President Donald Trump.

Hatewatch found 36 hate groups operating in Tennessee in 2018, including dozens linked to the white supremacist movement. The state has also played home to several high-profile white supremacist rallies, events and conferences in recent years, including a White Lives Matter event staged in Shelbyville in 2017 and a series of rallies put on by the neo-Nazi group Traditionalist Worker Party throughout 2017 and 2018. American Renaissance, a white nationalist think tank, hosts their yearly conference in Tennessee and plans to do so again this May.

News of the fire coincides with a racist incident on the University of North Carolina’s Chapel Hill campus Sunday. The Unsung Founders Memorial, which commemorates the lives of slaves and black workers, was vandalized with permanent marker and urine, according to police.

Arrest warrants have been issued for two suspects linked to the vandalism in Chapel Hill, campus police said.