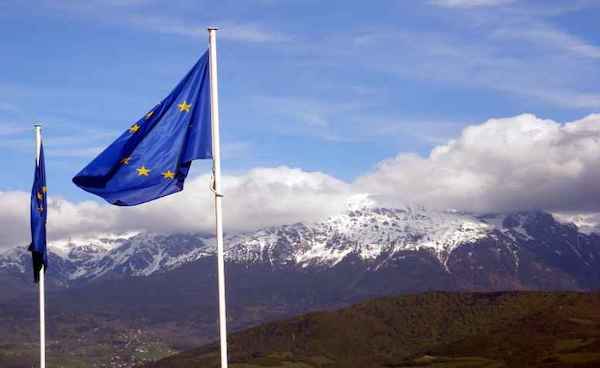 Capitalism, a fundamentally competitive economic system, is organised in competing national states. Historically states were formed by the elites to promote the interests at home and abroad of the merchants, commercial farmers and capitalists in their particular territories. This form of political organisation of course remains central to the system. It continues to be one of the main ways capitalist competition expresses itself. It leads to huge waste through duplication, it generates the irrationalities of nationalism, often racism, and it leads to wars and imperial domination by stronger economies over weaker countries. At home, the assertion of a cross-class national interest is one of the keys to ruling classes’ ability to maintain their hold over domestic populations and sustain the process of exploitation.

For some the European Union appears to provide an alternative. They perceive it as an internationalist project, a counterweight to the apparent backwardness of nationalism. The wave of far-right extremism that has swept across Europe in recent years is one indication that this is an illusion.

There are two main reasons why the idea that backing the EU is a form of internationalism is a misunderstanding. The first is that the emergence of the EU did not mark a break from international capitalist competition at all but a reorganisation, and in many ways an intensification, of it. From the point of view of the European elites who have constructed it, the main function of the European Union (previously a little more accurately called the European Economic Community) is to allow for economies of scale which enable them to compete with the world’s biggest economic players. Economic union and a shared currency provides European big capital the freedom to move in a friction-free across the borders of the member states and helps to integrate production chains.

In this way, the big European producers are able to compete more effectively against companies based in other mega economies. China is one of the European economies’ main headaches, a fact on display this week when the French President Emmanuel Macron, German Chancellor Angela Merkel and EU Commission President Jean-Claude Juncker met the Chinese President Xi Jinping to discuss the growing tension between the EU and China. This high-level meeting came days after the EU published a “strategic outlook” on China in which it called the world’s second-largest economy a “systemic rival”.

Competition is then not being overcome but reproduced at a higher level. This competition leads to similar outcomes as that between nation states. The EU, which already has close ties with NATO, is moving towards setting up its own army. Free movement for people within Europe is a great gain and something that must be defended. But it’s important not to forget that Europe’s external border controls are amongst the most brutal in the world. Since 1993 reported deaths of people trying to get into Europe from poor and war-torn countries reached 35,000 in 2018, and the death rate has rocketed in the last few years. Recently the EU has scrapped the seaborne patrols of operation Sophia, the very limited search and rescue project that has saved thousands of lives.

But this is not all. In reality, competition continues between the countries in the EU too. In fact, the single currency, economically porous borders and the imposition of free trade rules actually gives the richer economies more power to dominate the poorer inside the EU. In the past, European countries could for example devalue their currency to make their exports cheaper. That option no longer exists. Sovereign governments used to be able to intervene in their economy in any way they wished to boost sectors of their economy. EU rules forbid many forms of government intervention and give companies the right to buy or invest as they please in other countries on free market rules. German and French car companies for example have transferred production to Eastern European countries like Romania and Poland to benefit from their low wage economy. No wonder then that not only has inequality within EU countries grown in the last few decades, but disparity between different EU regions has grown along with integration, leading to a situation in which some of the economies on Europe’s Southern rim are in a state of permanent crisis.

While the EU imposed a high degree of economic convergence, politics is still in the main organised at the national level. EU democracy remains weak to the point of being token. Most decisions are taken by the unelected commissioners and any major changes require the sign-up of all member states. The result is the radical weakening of political control over economic questions, emptying democracy of much of its meaning. Ruling classes are not unhappy with this. It provides an alibi for imposing neoliberal free market economics. As even Kevin Featherstone, an enthusiast of the project admits, ‘binding EU commitments enable governments to implement unpopular reforms at home whilst engaging in ‘blameshift’ towards the EU, even if they themselves had desired such policies’.

The EU then is a regional – not international-elite project whose aim is to increase the profits of European corporations and to limit the power of ordinary people to do anything to intervene. It has the effect of strengthening the power of the big corporations and the ruling classes of the most powerful countries while weakening democratic control. It is this poisonous combination of increased exploitation, the hollowing out of democracy and the domination of the richest countries and regions that is leading to a popular bitterness. This can take left wing or far right forms but is in all cases contemptuously dismissed by the elites as ‘populism’.

Internationalism has the very opposite aim. It is a tradition of politics that seeks solidarity between working people with a view to overcoming the tyranny of competition and the drive to the bottom that it generates. It is not about supporting capitalist regional blocs to strengthen corporate power but about increasing the ability of working people to resist exploitation. It is not about enabling the richest countries to dominate but struggling against the domination of one country over another, deepening democracy and supporting people’s right to self-determination.

Because capitalism is based on competition, real internationalism is always a challenge to the elites. Because politics and the limited democracy that we have is organised along national state lines, internationalist policies have to be fought for at the national level. The single most important contribution people in Britain for example can make towards weakening the hold of neoliberal economics in Europe and beyond is to push for a Corbyn-led Labour government with no concessions on free movement and a radical programme intact, and it must be said, a mass movement to back it up. This is something the European elites dread, precisely because it might be contagious.