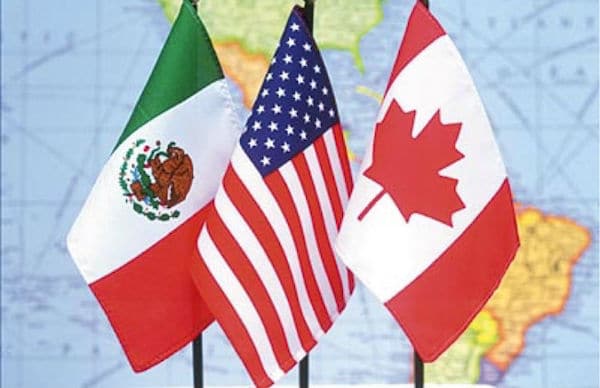 The headlines once again misrepresent the aims and consequences of a U.S. free trade agreement, in this case repeating the International Trade Commission’s claim that President Trump’s U.S.-Mexico-Canada agreement (USMCA) will boost U.S. growth and employment.

The International Trade Commission is required by law to evaluate the economic consequences of the USMCA, which is supposed to replace the North American Free Trade Agreement (NAFTA), before Congress can debate whether to approve it. According to its report, which was released on April 18, 2019, the agreement can be expected to “raise U.S. real GDP by $68.2 billion (0.35 percent) and U.S. employment by 176,000 jobs (0.12 percent)” and “would likely have a positive impact on U.S. trade, both with USMCA partners and with the rest of the world.”

While supporters of the agreement happily repeat the Committee’s conclusion “that, if fully implemented and enforced, USMCA would have a positive impact on U.S. real GDP and employment,” the fact is that the predicted gains are miniscule. Moreover, given the flaws in the Commission’s admittedly sophisticated modeling, there is no reason to take the results seriously. Finally, a careful examination of the many chapters in the proposed agreement makes clear that its real aim is to strengthen contemporary globalization dynamics, enhancing corporate power and profits at the expense of majority living and working conditions in all three countries.

Putting the projected “gains” in perspective

The Commission assumed that the U.S. economy’s complete adjustment to the agreement would take six years. It then used a computable general equilibrium model to simulate how the terms of the agreement would change U.S. markets and compared the “equilibrium” outcome at the end of the adjustment period with baseline results that assumed no significant change in U.S. economic policies or global agreements over the same period.

On the basis of such modeling, the Commission concluded that six years after the implementation of the agreement, the U.S. economy would be $68.2 billion bigger than if the agreement had not been approved. That is, as the Commission acknowledges, a one-time gain of 35/100 of one percent in real GDP. Current U.S. GDP is over $21 trillion; $68 billion is a rounding error in an economy of that size.

As for the projected growth in employment, the one-time gain of 176,000 jobs relative to the base line forecast translates into an increase in employment after six years of 12/100 of one percent. That gain in employment is roughly equal to the number of new jobs added in a month of moderate economic growth. The Commission’s model produced similar miniscule gains for other variables, including U.S. wages.

It took a lot for the Commission to produce even these minimal games. More specifically, it took a dodgy methodology that is biased towards policies that promote globalization.

The Commission organized its work as follows: it first sought to model the economic consequences of “eight groups of USMCA provisions: agriculture, automobiles, intellectual property rights (IPRs), e-commerce, labor, international data transfer, cross-border services, and investment.” Then, it took the provision specific results of each group and used them as modeling inputs for the economy-wide computable general equilibrium model it used to produce the overall estimates cited above.

Since not all the provisions changed current policies, the Commission divided the eight groups into two categories. The first included the “set of provisions that would alter current policies or set new standards within the three member countries, and that would therefore be expected to modify current conditions after USMCA enters into effect.” This included provisions affecting agriculture, automobiles, IPRs, e-commerce, labor, and investment decisions related to the investor-state dispute settlement mechanism.

The second category included provisions that “would reduce policy uncertainty. These commitments would primarily serve to deter future trade and investment barriers, thus offering firms some assurance that current regulations and standards, which may or may not be expressly governed by current policies, will not become more restrictive.” Included in this category are provisions that would affect international data transfer, cross-border services trade, and investment decisions related to market access and nonconforming measures.

Significantly, it was the Commission’s determination of the gains from those provisions that would reduce policy uncertainty, by restricting the possibility for future government regulation of corporate activity, that proved decisive. As a Public Citizen Eyes on Trade blog post pointed out,

Most of the [overall gains reported by the Commission] are derived from a highly dubious new research methodology, which assigns an invented positive economic value to terms that reduce “policy uncertainty” by freezing in place environmental, consumer protection, financial and other safeguards. If the ITC had not done this, the report would have projected a negative outcome. All $68.2 billion of the deal’s supposed economic gains arise from simulating the impact of removing trade barriers that do not exist. In other words, the gains are generated not through the removal of trade barriers directly, but through the elimination of the possibility of new future regulatory policies, which are deemed to be potential trade barriers. Absent this fabrication, the revised NAFTA would have been projected to lower  the United States’ GDP by $22.6 billion and reduce the number of jobs by 53,900.

The problems only multiply when these separate results are used as inputs in the Commission’s economy-wide model. This model, as noted above, is a computable general equilibrium model. As such, it seeks to process all the ways the changes generated by the agreement interact to change market behavior before eventually producing–over a six-year period in this case—a new equilibrium outcome for the economy.  As one might imagine, this kind of modeling is quite complex and to ensure a result it requires some very significant assumptions. Among them are:

In other words, while we may want the Commission to investigate whether a new trade agreement might cause a worsening of trade balances, or unemployment, or deindustrialization, or monopolization, the Commission’s model, by assumption, asserts that these are non-problems. As a result, the model has a clear pro-trade agreement bias.

Thanks to these assumptions, if a country drops its trade restrictions, market forces will quickly and effortlessly lead capital and labor to shift into new, more productive uses. It is no wonder that mainstream economic studies, which rely on computable general equilibrium modeling, always produce results supporting ratification of free trade agreements. In light of this, it is striking how small the estimated gains were for this trade agreement.

So, one might ask, what is really going on here? Well, the agreement enjoys strong corporate support precisely because a number of its chapters include provisions responsive to the interests of leading U.S. multinational corporations. What follows are just a few examples drawn from the report.

The agreement includes provisions that require harmonization and thus a reduction in food safety standards, force governments to negotiate new standards with industry representatives, set deadlines for import checks, require that new standards be based on scientific principles, and that safety standards be applied “only to the extent necessary to achieve the appropriate level of protection” and “not [be] more trade restrictive than required.”

The agreement also includes a number of market access provisions to promote cross-border trade in services and financial services. More specifically, the agreement’s market access provisions “are aimed at removing quotas and other barriers that impede the entry of services suppliers into foreign markets.” The Commission believes that “the broadcasting, telecommunications, and courier services sectors in the United States are estimated to gain the most, followed by the commercial banking sector in all three countries.”

The agreement also includes provisions “which would strengthen protections in major IPR categories such as trade secrets, regulatory data protection, patents, trademarks, copyrights, and civil, criminal, and administrative enforcement.” The pharmaceutical industry will be one of the biggest beneficiaries.  For example, the agreement includes a “patent resolution mechanism that requires notice to patent holders, and an opportunity for relief, when a generic manufacturer seeks to rely on an originator’s test data for marketing approval without the patent holder’s consent.”

The USMCA would be the first U.S. free trade agreement with a chapter on digital trade. Among other things, it would prevent governments “from restricting cross-border flows of financial data, which would require data to be stored or processed locally” and would “forbid them to adopt restrictive data measures in the future.” This provision would be especially valuable to U.S. computer services and digital platform services firms. “Other key Digital Trade chapter provisions include a ban on import duties or other discriminatory customs measures on digital products (e.g., e-books, videos, music, software, and games), and prohibition of legal discrimination against digital products produced or created in other signatory countries.”

The agreement also includes a chapter that restricts the ability of governments to use state-owned enterprises to meet public needs by requiring that they be “regulated impartially, and do not benefit from special treatment and unfairly infringe upon the activities of private firms.”

The list goes on. No wonder that major business associations are expressing strong support for the agreement. As the New York Times reports:

Industry groups called for the pact’s quick passage into law. Linda Dempsey, the vice president for international economic affairs at the National Association of Manufacturers, said that the deal was “a win for manufacturers.”

Jordan Haas, the director of trade policy at the Internet Association, said the report underlined that the deal’s digital trade provisions were “critical to America’s future economic success” and “mean jobs and opportunities in every state.”

There is a lot at stake in this struggle. We need to stop calling for progressive reform of the agreement, a call that only leads to popular confusion about what drives U.S. government policy. Instead we need to build a movement that simply says no to NAFTA in any form.