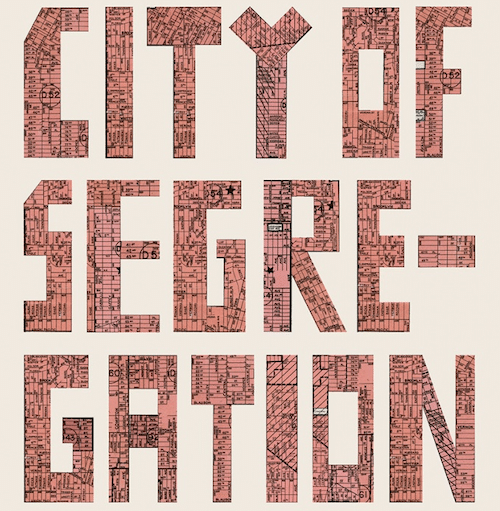 Los Angeles is a vast, sprawling, fragmented American metropolis, which has been etched into the consciousness of the modern world with the glamorous veneer of Hollywood stars alongside the stylised mean streets of South Central depicted in Straight Outta Compton (2015). It is a ‘checkerboard of desperate poverty and immense wealth’ (p.1) with segregation as the linchpin of racial stratification. 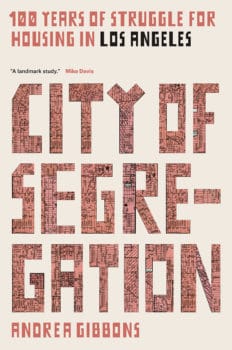 City of Segregation: One Hundred Years of Struggle for Housing in Los Angeles, by Andrea Gibbons (Verso, 2018).

The segregation is not natural; it is not down to individual choice as to where to live, as Milton Friedman argued, but is rather a product of a ‘combination of regulation, discrimination, structural inequality, and violence’ (p.1). Only white Americans have the freedom to use their wealth to buy a home wherever they like, and they use that freedom to isolate themselves from others. This has led to life defining levels of inequality with more than half of black families living in the poorest quarter of neighbourhoods in consecutive generations, whilst that figure is only 7% for white families (p.2).

The nature of this book is to explore how ideology, economics, politics and space have come together in LA to ‘create this kind of segregation, to think about how these dynamics continue in new forms to the present, and above all to think about how we might do better’ (p.2). LA, despite differences from other cities, is an excellent subject for study as it is connected to other U.S. cities through the patterns of the flow of capital, deindustrialisation at the centre with reindustrialisation in the suburbs. In the outer areas, unionised, higher skilled and higher paid work was available alongside a ‘shared history of white discrimination and violence’ (p.3). Andrea Gibbons, as a former tenant organiser in LA, is well placed to map both the history of discrimination and struggle along lines of race, class and gender.

Whilst the book focusses on LA, and brings in to focus its particular history of segregation and struggle, there is much that can be reflected upon and applied to the United Kingdom. Fair housing remains a central issue in the UK; there is also the tragedy of Grenfell, or the injustices of segregation in new housing developments such as the Baylis Old School complex in London, alongside the grassroots resistance to resist social cleansing.

Andrea Gibbons draws upon two distinct academic traditions in the writing of this book. On the one hand, there is the theory developed by authors such as Mike Davis and David Harvey that seeks to understand the ‘connections between capital, ideology and space’ (p.3). Whilst the author believes that these studies start to see where class and race intersect, she perceives them as taking capital as the starting point for analysis rather than understanding ‘that capital has been structured by race’ (p.4). This challenge to class based analysis is one that the author argues strongly throughout by drawing on the tradition of racialised geographies of poverty, power and privilege such as W. E. B. Du Bois’ The Philadelphia Negro (1899).

This approach throws up some deep insights such as the application of W.E.B. Du Bois’ concept of the veil. The veil is a clear physical line of difference from whiteness and includes the idea that the veil obscures white America’s view of African Americans; this prevents them from really understanding the colour line or accepting African Americans as true Americans. This is reflected in modern America’s gated communities, exclusive suburbs and more recently the social cleansing of downtown in the waves of gentrification to create social spaces reserved for whites and white privilege. These spaces physically demarcate white American from black America and shield the wealthier white eyes from ‘any disturbing views into poverty, as well as their own complicity in its existence’ (p.10).

Whilst this intellectual challenge throws great light onto the historical oppression that shapes American cities, the arguments in the book are at their most cogent where race, gender and class are understood as interlocking oppressions. These interlocking oppressions have placed African Americans as a marginalised community, which suffers ‘brutal displacement, tragedy and death’ (p.180) as a result. And the answer is one that Andrea Gibbons clearly outlines in her conclusion: ‘we need to work together to cross the color lines, imagine a new future, and theorise how we can get there as we walk’ (p.180).

In order to reach this conclusion, the book covers three stages in the geographical development of LA, mapping both the forces of oppression and the counter forces of resistance.

California was won through conquest in 1848, bringing it into the United States as a white, Anglo Saxon state. The indigenous population numbered 72,000 but by 1880 this had fallen to 15,000 as they were forced to sell their land to pay taxes and meet the costs of the 1851 Land Act. This kind of legal discrimination became common place in California until 1948, with ‘de jure segregation enforced through racial covenants written into property deeds’ to keep people who were not white from either owning or occupying land (p.20).

This triggered African Americans and other groups to resist the formal and informal walls that kept them within the ghetto. This action, begun in earnest in the 1920s, sought to win African Americans the right to own a home ‘anywhere they could afford, through an alliance of homeowners and a propaganda effort to prove the worthiness of African Americans of wealth and status’ (p.71). Tied to this was a legal campaign to outlaw racial covenants and end the legal segregation of Jim Crow. This movement did enough to end the legal enforceability of racial covenants by 1948, but segregation did not come to an end and was not ‘maintained simply through institutional and legal methods’ (p.20). Instead new strategies developed that saw capital and materials fed into huge, shining, suburban developments, which were built as a place of privilege and happiness for white Americans whilst inner-city areas were deliberately run down.

Bringing down the hate wall

The 1950s and 1960s saw the rise of a new generation of activists, who used the theories of non-violence and direct action to challenge segregation. The power of this new movement marginalised ‘openly expressed sentiments of white supremacy and biological racism’ (p.121) and forced the government to abandon its neutral stance on segregation. The government, with varying levels of success, began to support integration, put in place measures to improve the chances for minorities and challenge discrimination.

This new colour-blind world could not and did not challenge the economics of real estate. Inner city areas, such as Compton, were abandoned by developers to peoples of colour, whilst white Americans, capital, jobs and resources moved into the suburbs and gated communities. This created the new racial fault lines of LA, with white suburbs rich in amenities, life chances and privilege cut off from ‘the realities of poverty in resource deprived central cities’ wracked by deindustrialisation and the stripping back of the USA’s already meagre welfare state (p.122).

When the physical limits of this expansion were reached and suddenly the promise of higher profits for developers in inner city areas became clear, the flow of capital diverted back to central cities but remained wedded to the idea of white space and white privilege.

Into the 2000s and back to the centre

As capital returned to downtown, business interests felt it necessary to attempt the ‘brutal displacement of an entire community’ (p.174) to better create a downtown space of privilege and happiness. This attempt has been built around the language and ideas of neoliberalism ‘using the rhetoric of market over government, color-blindness, individual responsibility and property rights’ (p.178). Behind this anodyne, liberal language of rights lurks exclusive, privatised residential communities and state repression in the form of police brutality and the rise of the carceral state.

Opposing this brutal displacement were groups such as LA CAN, which developed from community organising to give people from downtown Skid Row ‘power over their surroundings and their lives’ (p.135). This movement forms a powerful example of how resistance can be built to oppose brutal social cleansing and gentrification, to defend social housing and to defend the moral recognition of people’s ‘place in their community and their very humanity’ (p.174).

The model for organising is intersectional as it seeks to ‘eradicate the race, class, gender barriers that are used to prevent communities from building true power’ (p.135). It is also based on the idea of a long-term transformation through the ‘collective struggle to transform an unjust world’ (p.135) with direct democracy as both their goal and their process. This aims to build a democratically organised community to define issues, agree solutions and find methods to achieve these solutions both in the present and in the future. Such a model can provide the inspiration for activism in defence of communities across the USA and here in the UK.