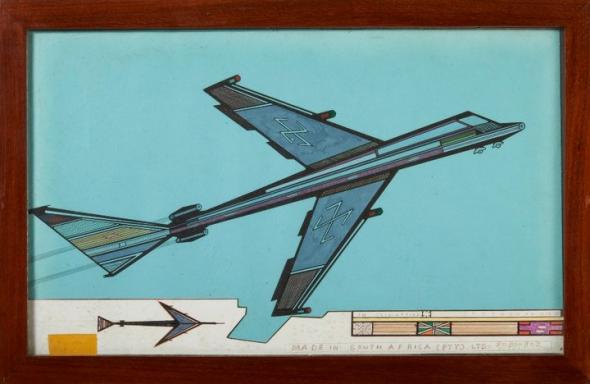 When the late South African artist Tito Zungu wanted to depict the world of the migrant labourer, he settled on the envelope. It was by infrequent letters that the migrant would be able to be in touch with family–letters dictated to professional letter writers at one end, which would be read out by professional letter readers at the other. With pencil and coloured pens, Zungu drew airplanes and boats as well as transistor radios on these envelopes–images that showed how the migrants moved and how they sought some entertainment.

Around the time that Zungu drew on envelopes, the great South African musician Hugh Masekela turned his attention to the migrant miners. His song, written in 1971, Stimela: The Coal Train captured the great damage done to the people of Africa by migration and mining (Stimela is the Nguni word for train).

There is a train, Masekela sings, that comes from Namibia and Malawai, from Zambia and Mozambique. It is full of conscripted labour, people who come to work in Johannesburg’s gold mines. ‘For almost no pay’, these miners go ‘deep down in the belly of the earth’. The ‘evasive stone’ does little for the miners, their pay low, their food terrible, their homes ‘flea-ridden’. And then these miners dream, but their dreams drift into the awfulness of reality,

They think about the loved ones they may never see again
Because they might have already been forcibly removed
From where they last left them. 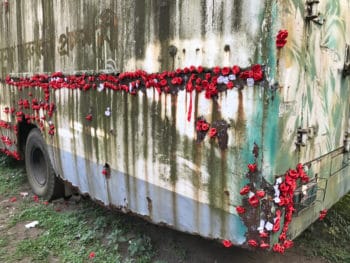 Naeem Mohaiemen, ‘Do not fear/I will arrange a procession/soldiers will march past carrying flowers not guns/only for you/my love’ (after Shahid Kadri), 2017.

The wealth goes elsewhere. It is no coincidence that the English named their new coin the ‘Guinea’ in 1663–a reference to Africa’s western coast (which was in turn was named this way by the Portuguese and Spanish to honour the great commercial city Djenné–now in central Mali). English money is shaped by plunder from Africa. This was the situation in the 17th century and it remains the situation–in large measure–today.

Silence is not the mood of the miners. They have fought against the theft of their labour from the days of colonialism into these neo-colonial times. Their protests have been fierce, and the reaction to them has been deadly. The attack on the miners at Marikana (South Africa) in 2012 is emblematic, but it is also quite ordinary.

Miners–like landless workers–are familiar with gunfire and teargas, from one end of Africa (Marikana, South Africa) to the other (Jerada, Morocco). But state violence and the violence of corporations does not stop the miners and the landless workers. In South Africa, an election was held on Wednesday, 9 May, where the miners and landless workers lined up to vote (resulted are expected on 11 May). Many of them are part of the National Union of Metalworkers of South Africa (NUMSA) and of the Abahlali baseMjondolo – the ramparts of the working-class in the country. Despite the expected victory of the African National Congress–whose hold over the electorate has not slipped in the post-apartheid period since 1994–tens of thousands of landless workers put in their ballot for the Socialist Revolutionary Workers Party (SRWP), a new formation in the country. They emerged after the Marikana massacre, whose platinum mine was owned by Lonmin–a firm that had on its board of director Cyril Ramaphosa, the current leader of the African National Congress. Whether it is in South Africa or Zambia, Sudan or Ghana, the landless workers on the continent–against incredible odds–continue to struggle for more of the surplus, to battle for a future. 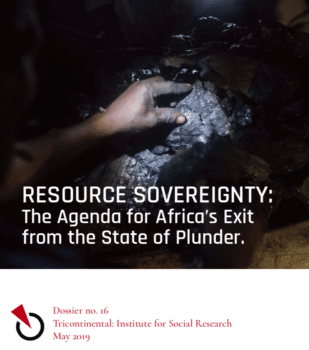 From Tricontinental: Institute for Social Research comes our Dossier no. 16, Resource Sovereignty: The Agenda for Africa’s Exit from the State of Plunder. This dossier takes up the themes of resource theft and resource sovereignty. To understand these themes, we turned to Gyekye Tanoh, head of the Political Economy Unit at the Third World Network (Africa), based in Accra (Ghana). Gyeke’s interview is rich and rewarding. He takes us through a journey of the plunder on the continent–from the theft of surplus value from the landless workers to the various forms of deeply corrupt theft of resources through illicit financial flows, by repatriation of profits, through mispricing and by deflation of the value of the raw materials removed from the continent. He offers a shocking piece of data from a recent Bank of Ghana report–of the $5.2 billion worth of gold exported by foreign-owned mining firms from Ghana, the government received only $68.6 million in royalty payments and only $18.7 million in corporate income taxes. That’s 1.7% of the value of the gold–the price of which inflates as soon as it leaves Ghana’s shores. Furthermore, the return to the communities that live above the gold is a mere 0.11%. Those who mine the gold get the least return from it.

Capitalism’s scandalous mining behaviour camouflages its plunder behind the discourse of ‘good governance’. The claim made is that it is not the foreign-owned mining firms (many of them Canadian, for which see our Briefing no. 1), but the corrupt elite in Africa that is responsible for the enduring poverty. No doubt corruption of any sort is a drag on the lives of the landless workers. This corruption, Gyeke explains, is symptomatic of the structure of the world economy. From many countries on the continent, debt servicing payments–often for odious debts–are larger than the sum of money pocketed by government officials and local elites.

We highly recommend this interview with Gyekye. It is filled with insights that bear serious reflection and further debate and discussion.

Residents from Lesetlheng village in South Africa’s North West Province celebrating outside the Constitutional Court after it set aside the High Court interdict evicting them from their farm land. Ihsaan Haffejee, 2018.

So much plunder, so much poverty. The weapons that the poor wield today are their ballot papers, their running shoes and their organisations. The ballot papers allow them–if they have the right–to exercise their vote. This right is being slowly eviscerated by money, fake news and voter suppression. The running shoes allow them to migrate to ever distant shores, but as the walls grow more dangerous around the West, these shoes are less and less useful. Finally, the landless workers have the weapon of organisation, to form political platforms that amplify their class interests. But these are weaker these days, fighting to shift the tide of history. It is the guns of money that are first turned on them. It is what killed Berta Cácares in Honduras in 2016. It is what threatens the lives of those who stay firm against plunder: people like Francia Márquez, a leader in the fight against illegal gold mining in Colombia (who survived an assassination attempt on 4 May). Francia Márquez won the Goldman Environmental Prize in 2018 for her work against the extraction sector, the same award given to Berta Cáceres in 2015, the year before she was assassinated. 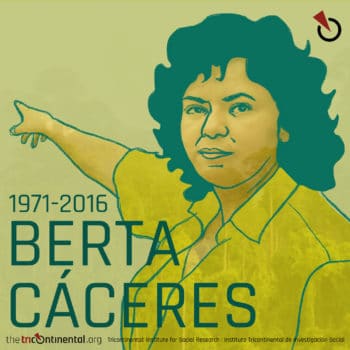 In 1899, the Permanent Court of Arbitration at The Hague pledged to end war, to create ‘a real and lasting peace’. Since 1899, there have been hundreds of attempts to use negotiation to end war, with the formation of the United Nations to provide an institutional space for negotiation rather than war. Wars come now with frightening regularity. U.S. warships are on their way to the coast of Iran. The U.S. threatens Venezuela with war. Trade wars are on between the U.S. and China, an issue discussed by economist Prabhat Patnaik in our seventh dossier. The high-minded aspirations of the Permanent Court of Arbitration and of the UN remains, but it is cheapened by the need of powerful and rich countries to exercise their dominion by boycotts and bombardments.

The escalation of pressure on Iran–by sanctions and threats of war–should chill the heart of any sensitive person (my column documents these threats, and the impact of sanctions on Iran). War against Iran will inflame the region that stretches from the Mediterranean Sea to the Hindu Kush Mountains. It is to be avoided. But wars are not irrational. They are used by powerful states to exercise dominion, to send a message to the landless workers that they must bend their heads and go into the mines without making too much noise.

Colonel Ewart Grogan, a British officer and settler-colonial leader in Kenya, said of the Kikuyu, ‘We have stolen his land. Now we must steal his limbs’. What Grogan meant was that having stolen the land of the Kikuyu peoples, they must now be converted into labourers. But the crucial word here is ‘stolen’. To steal requires force. It is by war that the world is made, and it is by war that the unequal power relations are maintained.