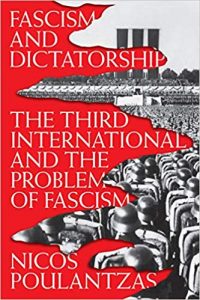 Around the world, fascism and the extreme right have made significant gains. In Hungary, Viktor Orban has established a fiercely xenophobic, anti-immigrant government, with participation of the fascist Jobbik party. In the United States and Brazil, Trump and Bolsonaro took power with the support a fascist mass movement that openly attacks Muslims, immigrants, anti-communism, and people of colour. This worldwide neofascist phenomenon has resulted in a few new books, which use both Marxist and non-Marxist theory to account for its emergence. One of the most significant of these books is a new edition of the classic work, Fascism and Dictatorship by Nicos Poulantzas. The new edition of Fascism and Dictatorship contains a new introduction by Dylan Riley, a professor at UC Berkeley who recently wrote The Civic Foundations of Fascism in Europe. Riley argues in the introduction that Poulantzas should be the starting point for any serious study of fascism, both historical and contemporary.

In a way similar to Georgi Dimitrov and Paul Sweezy, Poulantzas argues that fascism has its ideological origins in the petty-bourgeoisie during a capitalist crisis. According to Poulantzas, the petty-bourgeoisie—shop owners, small farmers, state employees, and some professionals—have three ideological characteristics: status-quo anti-capitalism, a mistaken belief in their social mobility, and power-fetishism. During a political and economic crisis, the petty-bourgeoisie tends to account for the crisis with vaguely defined notions of ‘corruption’, ‘corporate greed’, and ‘the rich’. Poulantzas points out that the petty-bourgeoisie has an interest in defending its autonomy and property, and therefore is anti-capitalist without challenging the status-quo. Their class position makes them believe that corrupted, greedy politicians are preventing them from moving up the social ladder. Hence, their solution to a political crisis is not a socialist revolution, but the removal of corrupt politicians and the creation of a strong state with a powerful leader. These tendencies can be observed very clearly in Brazil, where fascists have succeeded in taking power. In his Brazil: Neoliberalism Versus Democracy, Alfredo Saad-Filho shows how the Brazilian middle class blamed ‘corrupted politicians’ in the Workers Party (PT) for all social problems in Brazil. Through the corporate media, they disseminated the idea that all politicians are corrupt, and that only the removal of the Workers Party could improve Brazilian society. Although these demands resonated primarily with the petty-bourgeoisie, they won over many non-unionised workers, criminal elements, and students. The Brazilian petty-bourgeoisie played a significant role in the fascist mass-movement to impeach Dilma Rousseff, put the former president Lula in prison, and got the fascist Jair Bolsonaro elected. Although this movement was lead by the Brazilian comprador bourgeoisie (capitalists aligned with imperialism), the large sections of the petty-bourgeoisie were its foot soldiers and primary mass base.

One of Poulantzas most important observations for understanding the extreme right today is his four-stage analysis of the rise of fascism. In the first stage, Poulantzas says that fascism exists as a mass movement that has grown and succeeded in establishing itself as a powerful force in society. The fascist movement has grown to such proportions that it becomes a danger and has the potential to seize state-power. In Brazil, this was the period between 2013, in which the right-wing seized control of leftist anti-government protests in Sao Paulo and other parts of the country, until they put Lula in prison in 2018. This mass movement posed a danger because they constituted the popular forces behind Jair Bolsonaro, and could no longer simply be ignored or dismissed as an isolated phenomenon. The second stage of fascism is “the period from the point of no return until fascism comes to power” (Poulantzas 66). One characteristic of this stage is a paralysis of working class organisations, which tend to only make economic demands, but fail to provide political leadership. Poulantzas shows how the German Communist Party (KPD) in the early 1930’s called many demonstrations for higher-wages as a result of the economic devastation of the post-war situation. Because the KPD did not initially think fascism was a real danger—viewing it as a temporary, passing phenomenon—they did not  fight the Nazi’s in the early 30’s, nor did they provide revolutionary leadership to the working class. They spent a lot of time attacking the SPD social democrats, instead of building a united front to defeat Hitler and the Nazi’s before they came to power.

In the second stage, the working class itself is significantly divided and the lack of political leadership drives some sections of them into the hands of the fascists. Here, the petty-bourgeoisie has succeeded in uniting the working class behind it in order to consolidate the forces to take political power. In Brazil, most Leftist parties and organisations had become critical of the Workers Party by 2014, and did not provide the political leadership needed to move the PT to the left. Some of them, such as the Unified Workers Socialist Party (PSTU) put out slogans such as “get rid of them all”, and agitated against both the Workers Party and the Brazilian neoliberal elite. Although they were always opposed to the PT since their founding in 1992, during the 2018 elections they escalated their attacks against the Workers Party. Others, such as the Communist Party of Brazil (PCdoB), tended to tail behind the Workers Party, and while they were critical at times, they did not really challenge their class collaborationist approach to governance. This left many working people confused and as a result of this, many moved to the right and joined the forces to help get Bolsonaro elected in 2018.

In the third and fourth stages, Poulantzas argues that fascism changes as a result of transforming from a mass movement to a fascist state. He points out how in the period of monopoly capitalism, the state plays a more interventionist role by directly intervening into capitalist production. During a crisis, such as the one in Europe and the United States in the 1930’s, the bourgeoisie will utilise interventionist strategies to save capitalism (i.e. Keynesian economic policies, Roosevelt’s New Deal, etc.). When there is a significant threat to its continued domination, fractions of finance capital will be more willing to embrace fascism, which Poulantzas points out is a more extreme form of interventionism.  This is exactly what happens during the third stage, in which the capitalist class provides assistance to the fascist mass movement and helps them get elected to power. The third stage represents the first period in which a fascist takes power and begins building a fascist state. Poulantzas says that during the third stage, the bourgeoisie staffs the fascist state with members of the petty-bourgeoisie who helped fascism come to power. The bourgeoisie will make concessions to the petty-bourgeoisie, such as the imprisonment of politicians perceived to be corrupt, the enactment of racist legislation, and the encouragement of violence against immigrants and national minorities. Also, in the third stage, the working class suffers significant political defeats. The fascist state will criminalise communist and socialist political parties, imprison their leaders, and eliminate legislation that protects the working class. In Brazil, the fascist government of Bolsonaro has removed LGBTQ laws, escalated attempts to prosecute important PT and PCdoB leaders on trumped-up charges, encouraged violence against indigenous people and minorities, and passed pro-gun laws on the pretext of fighting crime. Many middle class Brazilians — lawyers, professionals, some intellectuals — who were excluded from the state during the PT years (2002-2014) have been given high posts in the government, the federal police, and the educational system.

In the final stage of fascism, the fascist state has consolidated power and freed itself of its petty-bourgeois class origins. Poulantzas says that this is the most brutal stage, for it involves violent purges at the state level to remove the petty-bourgeoisie, and terroristic repression over the masses. The fourth stage results when the opposition to fascism does not succeed in removing the fascist government.  One defining feature of this period is the beginning of expansionist imperialist wars. In Germany, this was the beginning of the camps in Auschwitz, and the imperialist war against Europe and the Soviet Union. Brazil has not yet achieved this stage, and the dynamics in which it develops will probably be different than in Nazi Germany. Bolsonaro, Trump, and the right-wing Colombian president Ivan Duque have formed an alliance against the Venezuelan government of Nicolas Maduro. Furthermore, Brazil and Colombia have both given the US access to its military intelligence and allowed them to build military bases. The three of them backed the counter-revolutionary Juan Guaido in an attempted coup against Maduro, and spread anti-Venezuela propaganda in their media. The beginning of the fourth stage of fascism in Brazil will likely be accompanied by a direct military invasion of Venezuela, which will receive assistance from the United States, Colombia, and other right-wing states in Latin America.

The main strength of Poulantzas’ Fascism and Dictatorship is its strong theoretical foundation and class analysis. In recent works on fascism, such as Enzo Traverso’s New Faces of Fascism and Alexander Reid Ross’ Against the Fascist Creep, there is a tendency to provide a descriptive account of contemporary fascism rather than a theoretical one. Traverso provides a good account of how the National Front in France became popular by exploiting a long historical tradition in French culture of anti-semitism and racism. Although his account is illuminating in many respects, his theoretical foundation is weakly grounded in formulations from Hannah Arendt’s work on totalitarianism and contains neither a class analysis, nor an account of the structural dynamics of imperialism that bring fascists to power. Poulantzas work has the strength that it can bring these structural class dynamics to light, which are very significant for understanding fascist movements. One reason why it is important to study Poulantzas today is that it can provide the theoretical formulations that are missing in these recent works. The concepts developed in Fascism and Dictatorship are therefore a good foundation to supplement future research on fascism and fascist movements.

Fabian Van Onzen is a Professor in the Philosophy department at Lone Star College, Houston, TX.