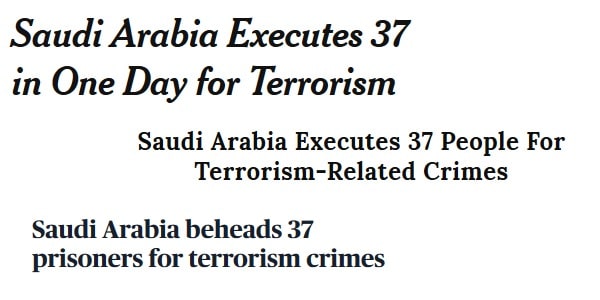 Time‘s headline (4/23/19) accepts the reality of the Saudi government charges against the people it executed–which weren’t even the actual charges they were convicted under.

Saudi Arabia executed 37 men on April 23, as it announced in a press release in its official gazette. The first line of the release read, “Saudi Arabia said it executed 37 citizens last Tuesday after they were convicted of terrorism.”

A cursory Google search would have shown that this assertion was completely false. But many in the U.S. press dutifully stenographed this claim into a headline:

In fact, by looking at court documents from the Saudi government, we know that of these 37 men, 11 of them were accused of being “Iranian spies,” and 22 were accused of participating in a demonstration during the Arab Spring. (These 33 belonged to the Shia minority; the others practiced Sunni Islam or could not be identified.)

Of the 22 men accused of protesting, six were juveniles at the time. Mujtaba Al Suweikat was on his way to study at Western Michigan University when the Saudi authorities arrested him and charged him with “inciting disloyalty to the king.”

Saeed Mohammed Al Skafi was 17 during the protests. One of the charges against him was “posting pictures of other detainees.” Most of the others were convicted of offenses like “chanting disloyal slogans about the king” and “using social media to incite demonstrations.”

Of the 11 convicted of being Iranian spies, they were also found guilty of farcical offenses such as “condemning the bloodshed” (in February 2012, Saudi forces in the Shia-majority Saudi governorate of Qatif had sprayed protesters with bullets) and saving images and documents of the protests (which are also available on YouTube) on their hard drives.

Among the other four people executed, Khaled Al Tuwairji, a Sunni, was accused of killing Maj. Gen. Nasser Othman. However, all three outlets repeated that he was a “Sunni extremist,” for which we have no other evidence. Al Tuwairji was tortured into a confession (Erem News, 4/23/19).  But all three outlets justified his execution and subsequent crucifixion by insisting that he was a convicted Sunni militant.

Another of the Sunnis executed, Khaled Al Farraj, was convicted on the vague charge of being affiliated with an outlawed terrorist organization. But even according to Saudi state media, he didn’t engage in any acts of terrorism. He is the only one of the 37 people executed who seems to have been charged with a terrorism-related offense. 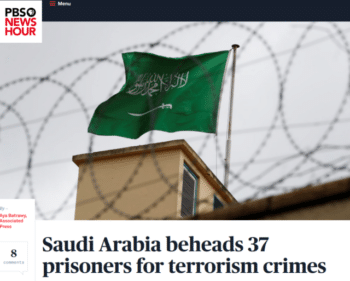 Having false information in the headlines is extremely prejudicial. Studies have repeatedly shown a large portion of readers do not read past the headlines–and those that do end up remembering the headline the most.

In its first version of the article, which has changed since then, the New York Times wrote of Saudi Arabia, “It listed the 37 men by name but provided little information about what specific crimes had been committed by whom or when.” Instead of relying on a Saudi press release, the Times could have tried a cursory web search–or even searched its own archives. In an article by the Times editorial board (8/3/17) nearly two years ago, it had a short biography of Mujtaba Al Suweikat, the “disloyal” Western Michigan student, and the specific crimes he had been charged with.

Though the Times article was edited after publication to include some information that didn’t come from the Saudi press release–citing a Human Rights Watch official’s concern that many of the cases “raised serious rights concerns,” for example–the revised article was still misleading. For example, in paragraph three, it stated,  “Some men had been involved in bomb attacks on security headquarters that had killed officers, the [state news] agency said.” As far as we know, none of the 37 executed men had been involved in any bomb attacks, but the Times never challenged this Saudi government assertion.

Furthermore, the Times said that 14 of those killed had been arrested in relation to “sometimes violent protests.”  It failed to mention that that violence came from the Saudi government. This video, from July 2012, clearly shows Saudi police firing on unarmed protesters. In searching through the news archives, articles have repeatedly mentioned protesters being shot by the Saudi police. There appear to be no reports (outside Saudi propaganda statements) of violence emanating from the protesters.

The articles in the Times, Time magazine and the NewsHour all mentioned Saudi/Iranian relations, thereby amplifying longstanding Saudi propaganda that accuses Shia of being naturally loyal to Iran, which is blamed for  “stoking unrest” to justify brutal crackdowns of the religious minority.

All three outlets also added gratuitous details about the attack in Sri Lanka and/or other ISIS-related attacks–attacks that there’s no suggestion any of the defendants were connected to. In fact, most of these defendants were arrested before ISIS existed. And a majority of those killed, being Shiites, would be viewed by ISIS as heretics. To bring up these attacks seems like a distraction from the topic of the stories, which is the Saudi government beheading people who have for the most part been accused mainly of being dissidents.

The planet is on fucking fire
The great work