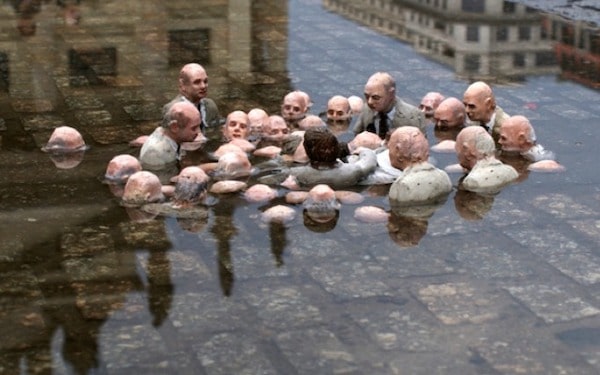 With reports the beleaguered planet is now recording the highest levels of atmospheric carbon in over three million years and oblivious goons in power seeing melting Arctic ice as a great shipping opportunity, no more Mister Nice Science Guy Bill Nye is losing it. Nye put in a memorably fiery appearance on Last Week Tonight, where John Oliver presented a typically cogent, detailed, 20-minute segment on climate change, explaining the grim facts, the value of Rep. Alexandria Ocasio-Cortez’ Green New Deal, the issue of carbon taxes, and the fact that “we’re going to need a lot of different policies working tandem, and we have to take action right now.” Oliver then invited the ordinarily placid science educator to “drive the urgency home” with “one of his enjoyable, lighthearted demonstrations.“

Nye promptly did, with what Oliver admiringly called “ an entirely appropriate amount of profanity.” “By the end of this century, if emissions keep rising, the average temperature on Earth could go up another four to eight degrees,” said Nye, growing agitated. “What I’m saying is the planet is on fucking fire.” He then torched a globe, waved toward several props, and snarled the rest of his infuriated rant. “There are a lot of things we could do to put it out. Are any of them free? No, of course not. Nothing’s free, you idiots. Grow the fuck up. You’re not children any more. I didn’t mind explaining photosynthesis to you when you were 12. But you’re adults now, and this is an actual crisis, got it?” Pass Oliver’s segment on to relatives in denial. Keep Nye to remember you’re not alone.