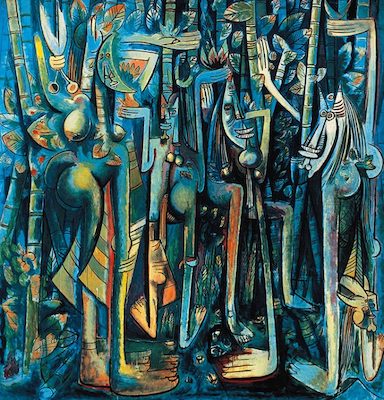 The text from a recent United Nations (UN) report has a title that buries its serious message: Summary for policymakers of the global assessment report on biodiversity and ecosystem services. The Intergovernmental Science-Policy Platform on Biodiversity and Ecosystem Services published this report on 6 May. The text is the fruit of 145 experts from 50 countries, with input from another 310 researchers and authors. It draws on a reading of over 15,000 scientific and governmental sources and it incorporates the wisdom of indigenous knowledge. It is a summary, which will be elaborated later this year into a 1500-page final report. The weight of the scientific community sits at its heart. The most important finding of the report is this:

1 million animal and plant species are now threatened with extinction, many within decades.

The rate of global species extinction is tens of hundreds of times faster now than it was over the last ten million years. It is an impossible report to read, planeticide is almost guaranteed: 75% of the terrestrial environment ‘severely altered’, 680 vertebrate species driven to extinction since the 16th century, more than 40% of amphibian species, almost 33% of reef-forming corals and more than a third of marine mammals are on the edge of extinction.

Last August, six Finnish academics released their background paper for the UN Global Sustainable Development Report, which will be released later this year. Their paper was for the chapter on Transformation: The Economy. The scientists, led by Paavo Jårvensivu, argued that ‘the era of cheap energy is coming to an end’. Fossil fuel capitalism has run its course. All potential replacements for fossil fuels—the renewable sector—are far less energy efficient than carbon-based ones and they will be far more expensive. Massive changes are needed not only in the energy sector, but in the very design of our societies if we can move global net emissions to zero by 2050. ‘Market-based action will not suffice’, write the academics, ‘even with a high carbon price’. Capitalism, in other words, cannot solve the serious problem of extinction. We need to think about other ways to manage human life on the planet, with a keen eye to the inequities that shape consumption patterns and that shape waste. Not everyone lives at the same exorbitant standard, and not everyone has to be a recipient of the waste products generated by the wealthy.

Naomi Phillips and Thomas Hasel, The Rich, The Poor and The Trash, 2018.

The proposals in the UN report are ambitious and are blind to the differential needs of the wealthy and the poor. For instance, it is necessary to propose lower total energy use for people in the West, whose consumption of energy is far higher than that of the landless workers of the Global South. Transportation systems and housing systems need to be modelled so that there is more reliance upon public transport and co-housing. Current food distribution systems allow 33% of all food harvested to go to waste. Far better, therefore, to construct sustainable food systems that seek to place food security at its heart and that have a lower carbon footprint on the food supply chain. Money for all this is available even if hard to find: tens of trillions of dollars in tax havens, tens of billions of dollars in subsidies given to fossil fuel firms and agribusinesses that condemn the planet to annihilation. If this money could be assembled, it would be a sufficiently large fund to reconfigure energy, transport, housing and food systems.

The UN report challenges orthodox economic thought—the science of capitalism. Rather than ‘abstract economic goals’—such as profit-maximisation—the focus of economic activity should be ‘life-improving and emissions-reducing’. ‘Economic activity will gain meaning not by achieving economic growth’, write the Finnish academics, ‘but by rebuilding infrastructure and practices towards a post-fossil fuel world with a radically smaller burden on natural eco-systems’. The new summary of the UN report, along this grain, notes that the transition would ‘entail a shift beyond standard economic indicators such as gross domestic product to include those able to capture more holistic, long-term views of economics and quality of life’. Unable to give a name to all this, the reports suggest that the only human-led antidote to extinction is socialism.

But to believe that a socialist approach could halt the annihilation of fossil fuel capitalism is not sufficient. Even if the objective conditions are there, the subjective possibility for the consolidation of socialism is not so apparent. The reservoirs of the Left’s power are low, the weaknesses apparent. The Left has to be built and built in a hurry.

The über-wealthy believe that they can hide from the crisis. They are in search of citadels, novel ways to preserve their wealth into the era of catastrophe, frightened that their guards might turn their guns on them, dipping into the fantasy of building a robot army to protect them in their islands of prosperity. Europe builds its ‘wall’ along the Sahel, as the United States does so deep into Central America. Achille Mbembe calls the attempt to stop human beings from migration ‘para-genocide,’ asking instead that we try to imagine ‘different ways of reorganising the world and redistributing the planet among all its inhabitants, humans and non-humans’. 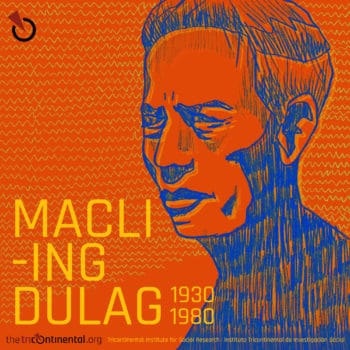 How can you own that which outlives you?

The Masters of War are spending more time provoking war in Iran and Venezuela, standing aside as Afghanistan continues to burn and as the Mediterranean Sea and the Sahara Desert continue to claim human lives. For them the para-genocide is an acceptable reality. They are unwilling to imagine a reorganised world. For them, any price is worth paying if they retain their wealth—the murder of gentle people like Macli-ing Dulag in the Philippines in 1980, as he tried to defend his community from the Chico River Dam Project, the murder of thousands of others as they try to construct a socialist future.

In 1964, Oodgeroo Noonuccal, a poet from Minjerribah (in the land known as Australia) wrote We Are Going. The poem, which gives this newsletter its title, observes the extinction of the world of the aboriginal people, their lands gone, their customs eroded. (The ‘bora ring’ is a ceremonial space and the ‘corroboree’ is a dance ceremony).

We are the shadow-ghosts creeping back as the camp fires burn low.
We are nature and the past, all the old ways
Gone now and scattered.
The scrubs are gone, the hunting and the laughter.
The eagle is gone, the emu and the kangaroo are gone from this place.
The bora ring is gone.
The corroboree is gone.
And we are going.

Unless we do something about it.

Professor Sandra Díaz, who teaches in Argentina’s National University of Cordoba and is the co-chair of the IPBES report, said that although bio-diversity and eco-diversity are ‘declining fast’, ‘we still have the means to ensure a sustainable future for people and the planet’.

If we do something about it.