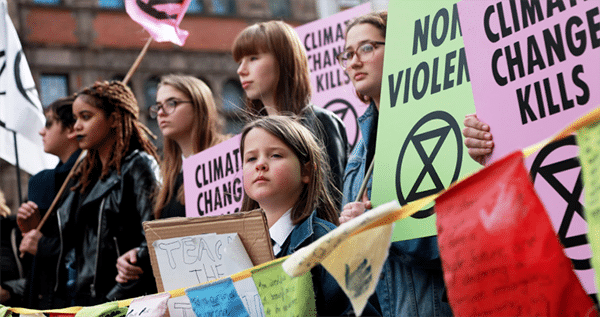 This one has to succeed. It is not just that the youth climate strike, now building worldwide with tremendous speed, is our best (and possibly our last) hope of avoiding catastrophe. It is also that the impacts on the young people themselves if their mobilisation and hopes collapse so early in their lives, could be devastating.

To help this movement win, we should ask why others lost. We should ask, for example, why Occupy, despite the energy and sacrifices of so many, came to an end, while the institutions it confronted remain intact. We should wonder why the global justice movement of the late 1990s and early 2000s, despite the numbers involved, their courage and determination, has not changed the world. We should consider why Podemos, the Spanish party that rose so high on the optimism of the indignados movement, now seems to be spiralling into recriminatory collapse.

Those of us who witnessed these disappointments have, I feel, a painful duty to be as honest about them as possible, to help ensure their failures are not repeated. Much of what I propose here is controversial, and I can’t promise I’ve got it right. So my first advice is this: don’t listen only to me.

I believe a central task for any campaign is to develop a narrative: a short, simple story explaining where we are, how we got here and where we need to go. Using the narrative structure that is common to almost all successful political and religious transformations, the Restoration Story, it might go something like this:

The world has been thrown into climate chaos, caused by fossil fuel companies, the billionaires who profit from them, and the politicians they have bought. But we, the young heroes, will confront these oligarchs, using our moral authority to create a movement so big and politically dangerous that our governments are forced to shut down the fossil economy and restore the benign conditions in which humans and other species can thrive.

This restoration narrative, I think, could be greatly strengthened by recent findings suggesting that ecological recovery–restoring forests, salt marshes, peat bogs, the seabed and other crucial ecosystems–could, by drawing carbon dioxide from the atmosphere, make a massive contribution towards preventing climate breakdown.

I believe a successful movement should also define a clear and tangible objective, perhaps a date by which nations achieve a zero carbon economy. It could recommend a pathway, such as a ramped-up version of the Green New Deal proposed by the most progressive Democrats. If so, it will need to set a series of waymarks, by which it can judge whether or not governments are on track. This ensures that the activists, rather than the government, keep setting the agenda.

This objective should be supported by a set of irreducible principles, that can be explained and spread with pride and conviction. Here are a couple of possible examples:

Human life is not negotiable; it cannot be exchanged for money. The generations which have yet to be born have the same rights as those already alive.

Clear principles appear to be essential to the long-running success of a campaign. A fascinating report on Truthout explains how the indigenous people living around Lake Texcoco in Mexico confronted a $13bn international airport–the biggest infrastructure project in Latin America–and, across 17 years, and despite all predictions, won. The campaign was built on the principle that their land and community were not for sale, however much money might be offered. This ensured that the Mexican government’s only remaining strategy was force. But the people had created such strong community organisations and attracted so much support from other Mexicans that force soon ceased to be an option.

This suggests another crucial element: a protest community strong enough to resist all attempts at division and co-option. Such communities do not arise by accident, but are consciously and carefully constructed, often with the help of training, ceremonies, music and fun. They must be strong enough to catch and defend people threatened by despair, burnout or breakdown, especially when the response gets nasty. Already, conspiracy theories are being spread by politicians and the media, suggesting that the young people have been organised by unknown sinister forces: after all, how could children possibly organise themselves?

Greta Thunberg, whose school strike sparked this movement, has written a response far more dignified and mature than the articles attacking her in publications like the Spectator. But the nastiness has only just begun. As some of us can testify, the viciousness of the lobby groups funded by the fossil fuel industry, and the publications that amplify their message, knows no limits.

I would suggest that the climate strikers develop clear rules of engagement, in order to give their opponents no ammunition. In my view, the global justice movement was gravely damaged by its failure to exclude or contain the Black Bloc: people dressed in black, some of whom came to protests tooled up for a fight, and often smashed up random local businesses, denting support for the mobilisation with every blow. Some people in the movement believed that everyone had a right to join it on whatever terms they wished. I see this as an unaffordable indulgence.

Successful movements also need an organisational model, that allows them to keep growing. One promising approach is Big Organising, that helped Alexandria Ocasio-Cortez take her seat in the U.S. Congress. They need clever, funny and innovative tactics, that take opponents by surprise and create a sense of forward momentum. Designing such tactics, narratives and principles is, I believe, best done by a small number of people, then put to the wider group for approval. I saw how Occupy became bogged down in the impossible process of developing complex policies through consensus.

All this is a lot to dump on young people. But there are plenty of veterans, many of whom have far more experience than I do, who are ready to offer advice and help. Any support must come on the young strikers’ terms: they lead, we follow. But they carry a terrible burden: this is a struggle they cannot afford to lose. We will help them lift it if they wish.

George Monbiot is a British writer known for his environmental and political activism. He writes a weekly column for The Guardian and is the author of the bestselling books Feral: rewilding the land, sea and human life, The Age of Consent: A Manifesto for a New World Order and Captive State: The Corporate Takeover of Britain, as well as the investigative travel books Poisoned Arrows, Amazon Watershed and No Man’s Land. His latest book is How Did We Get into This Mess? Politics, Equality, Nature.