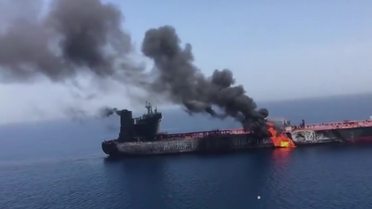 The Iranians said the U.S. was indulging in warmongering.

The alleged attacks on two tankers in the Gulf of Oman near the Iranian coast yesterday have provided fresh ammunition for the U.S. policy against Iran. Secretary of state Mike Pompeo held a press meet and blamed Iran for the attacks. Though he did not provide any evidence for his allegations, he claimed that his statement was based on “intelligence, weapons used, expertise needed to execute the operation, recent similar Iranian attacks on shipping and the fact that no proxy group operating in the area has the resources and proficiency to act with such a high degree of sophistication” BBC reported.

The Iranian mission to the United Nations categorically denied the U.S. allegations. According to its statement, “Iran categorically rejects the U.S. unfounded claim with regard to 13 June oil tanker incidents, and condemns it in the strongest possible terms.” Iranians called the allegation another attempt to spread Islamophobia and warmongering.

These ships were allegedly attacked yesterday morning. It was earlier reported that the tankers, Front Altair and Kouka Courageous, were owned by the Marshall Islands and Panama respectively. However, media reports claimed today that these ships belonged to Norway and Japan. These ships were reportedly carrying cargo to Taiwan and Japan. Iranian teams carried out rescue operations and took all 44 crew members from both the ships to the port of Jask.

The attacks over a ship carrying Japanese cargo in the Persian Gulf on a day when Japanese PM was visiting Iran has raised suspicions. Shinzo Abe met Iranian supreme leader Ayatollah Khamenei yesterday. As per the reports in IRNA, Abe’s attempt to break the ice between the Iranians and the U.S. failed as Khamenei refused any direct engagement with Trump.

Mike Pompeo’s statement was full of misleading references and unproven allegations. For example, he did not specify what intelligence he was referring to. The nature of weapons used is also not clear so far. Taiwan’s CPC corporation, which had hired the Norwegian Front Altair, claimed the ship was hit by a torpedo. Other sources claimed it was a mine attack. The U.S. Central Command is claiming limp mines were used. All the navies operating in the region have the “expertise” to undertake such attacks. Pompeo’s apparent reference to the Fujairah attacks a month ago is misleading because when John Bolton made the allegation regarding Iranian involvement in the attack, he too did not present any proof.

After the Iranian denial, the U.S. military’s Central Command released an unverified video, which according to them, showed Iranian guards “removing some unexploded limp mines from the Kokuka Courageous”. However, nothing is visible in the video apart from some outlines. It is full of cuts. Iranian navy announced its own investigation into the causes and dimensions of these attacks.

Iranian Foreign Minister Javed Zarif tweeted on Friday, “I warned of this scenario a few months ago, not because I am clairvoyant, but because I recognise where the #B_team is coming from”. He said, “that the U.S. immediately jumped to make allegations against Iran-w/o a shred of factual or circumstantial evidence-only makes it abundantly clear that the #B_Team is moving to a #PlanB: Sabotage diplomacy-including by @AbeShinzo-and cover up its #EconomicTerrorism against Iran”. IRNA reported on Friday.