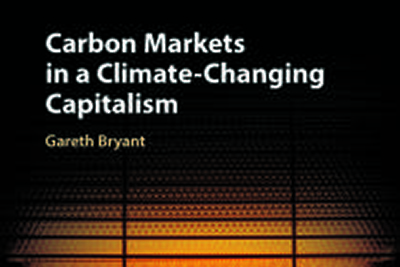 As the climate crisis deepens, fault lines between different possible political-economic pathways are widening. The current pace and breadth of decarbonisation is too slow and uneven compared to what the IPCC says is necessary to limit global warming to 1.5°C. In 2018, more new renewable energy was added than the total electricity demand of Brazil, but global emissions increased to a new high. It is clear that we cannot rely on the simple economics of solar and wind eroding the dominance of fossil fuels. Policy frameworks–and the political contests they reflect and shape–are now more important than ever.

The renewed sense of urgency created by the 12 year timeline set by the IPCC is sharpening debates on what kind of policy is needed to get emissions levels on track. On one side of the debate lies a market-based vision prioritising cost efficiency through incremental steps towards a sustainable capitalism. Policies that put a price on carbon, such as carbon markets, remain central to this approach. On the other side are plans to rapidly transform capitalism by linking climate action with the democratisation of the economy. These demands are coalescing around proposals for a Green New Deal.

The highly publicised IPCC report on 1.5°C scenarios walks both sides of this policy fault line. It declares that “explicit carbon prices remain a necessary condition of ambitious climate policies” while at the same time acknowledging that “limiting warming to 1.5°C above pre-industrial levels would require transformative systemic change”. Indeed, the IPCC notes that “even if [carbon] prices rise significantly, they typically incentivise incremental change,” whereas “embedded in the goal of limiting warming to 1.5°C is the opportunity for intentional societal transformation.”

My new book, Carbon Markets in a Climate-Changing Capitalism, published by Cambridge University Press, offers a framework to evaluate competing climate policy approaches. The premise is that debates over the direction of climate policy must consider how the policy operates within, and potentially reshapes, ‘climate-changing capitalism’. This notion emphasises that capitalism and climate change are co-produced in two internally related moments. In the first, capitalism produces climate change through the value relations, corporate actors and state institutions that propel the burning of fossil fuels. In the second, capitalism is reproduced within a changing climate that is partly of its own making–a context that encompasses the biophysical impacts of global warming and social responses to climate risk. Competing climate policies are part of this response and should be judged according to whether and how they reorganise the production of climate change by capitalism.

The book applies its framework to analyse the world’s leading carbon trading scheme, the European Union Emissions Trading System (EU ETS), and its links with international offsetting markets established under the Kyoto Protocol, chiefly the Clean Development Mechanism (CDM). It shows that the EU ETS has reduced pollution, created financial winners and accommodated improvements to its design. However, the environmental benefits have been marginal, the profits have been underpinned by fossil fuels and the reforms have come at the expense of other vital policies. The book explores these tensions to identify three contradictions–socio-ecological, economic and political–of carbon markets in a climate-changing capitalism. It argues that these contradictions combine to hinder pathways out of the climate crisis and point towards the viability and necessity of more targeted, democratic and transformative approaches.

First, carbon markets apply principles and tools of formal market equality to address what is a substantively unequal socio-ecological problem. The appropriation of carbon is clustered among a relatively small number of large-scale power stations, steel works, oil refineries, aluminium smelters and cement plants, which are owned by an even smaller group of corporations and governments. Just 20 publicly and privately owned companies, out of over 3,500 companies ultimately covered by the scheme, were responsible for half of EU ETS emissions. However, the commodification of carbon equalises these socially and spatially variegated patterns of fossil fuel use, abstracting from questions of how and where emissions are reduced. This allows companies to keep polluting by sourcing allowances and external offsets that often represent, at best, marginal forms of climate action, such as switching from coal to gas.

Second, the financial viability of carbon markets depends on setting a stringent-enough emissions cap while preserving fossil fuel industries. States have had difficulty navigating these regulatory and economic conditions, which are needed to foster compliance demand and market interest for trading carbon as a financial asset. Between 2008 and 2013, 2 billion tonnes worth of surplus carbon allowances–approximately one year’s worth of EU ETS emissions–built up in the system, sending carbon prices into the single digits and cutting the transaction value of global carbon markets in half. Traders had been experimenting with new carbon-derived assets, for example using the annual compliance cycle as a source of credit. However, dissipating carbon rents limited the capitalisation of carbon, leading to the exit of banks from the market. In a fragile post-crisis economy, states were reluctant to support a carbon market accumulation strategy that depends on, but could undermine, fossil fuel-driven accumulation outside of it.

Third, carbon markets shape climate politics in ways that prioritise the singular logic of price incentives over pluralistic policy debate. The crisis of the EU ETS redirected climate politics to efforts to save the carbon market. The passage of measures limiting the over-supply of permits, such as the ‘Market Stability Reserve’, showed that real, though uneven and limited, reform within the market paradigm is possible. However, the political case for reform subordinated policies outside the market paradigm, such as renewable energy and energy efficiency policy, on the basis that they could distort or depress the carbon price signal. The marketisation of climate change therefore worked against the political and institutional conditions necessary for a more targeted and multi-pronged framework for climate action.

Back to the climate future

After years of weak prices, financial losses and persistent controversy, the European carbon market has been showing signs of revival. Carbon prices have recovered to over €25 per tonne, banks are regaining interest, and the over-supply of allowances is being reined in by new market rules. Meanwhile, the Paris Agreement created the possibility of trading ‘mitigation outcomes’ between countries and establishing a ‘sustainable development mechanism’ for international offsetting, and China has established a national emissions trading scheme that covers more emissions than the EU ETS.

Yet, recent reports that carbon trading is “set for comeback” come with a strong sense of déjà vu. Headlines from 2018 reporting that carbon is the ”World’s Best Performing Commodity” and “Hedge Funds And Wall St Banks [are] Cash[ing] In” mirror earlier rounds of bullish expectations. With hopes still high about the Copenhagen climate conference and Obama’s cap-and-trade plan for the United States, a decade ago headlines proclaimed that “In London’s Financial World, Carbon Trading Is the New Big Thing” and “Carbon Trading Could Be Worth Twice That Of Oil In Next Decade.”

Carbon Markets in a Climate-Changing Capitalism offers an account of why these earlier expectations were not matched by experience. While the contradictions of market solutions have not gone away, the difference this time is that we are just over a decade away from the IPCC’s 2030 benchmark for 1.5°C. The concentration and centralisation of emissions instead points towards a different pathway that can meet this challenge–one that begins by confronting the disproportionate control the biggest polluters have over our climate future.