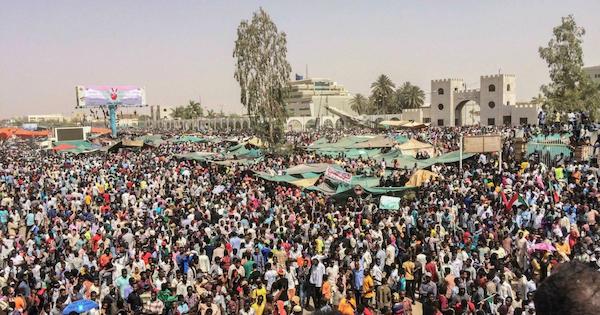 The civilian forces, led by the Sudanese Professionals Association, has embarked on a major mobilization drive on the ground

Protesters in Sudan are set to reclaim the streets again, barely two weeks after their mass sit-in demonstration outside the army HQ in Khartoum was cleared with a massacre of at least 128 people.

While a number of demonstrations were held in different parts of the country since the massacre, no large demonstrations were reported. The militiamen of Rapid Support Forces (RSF) continue to patrol the streets of Khartoum, terrorizing the populations by raping, shooting and beating any civilian who dares to set out on the street. The situation has been described by many as a “mass house arrest”.

The main tool of resistance during the period of terror which followed the massacre was civil disobedience. Millions had struck work for two and a half days, paralyzing banks, public transport, railways, ports, etc. However, except for small demonstrations, the activity on the streets was limited to the action of “barricade and run”.

On Sunday, June 16, the Sudanese Professionals Association (SPA) announced in a statement, “Our triumphant revolution is reconstructing across Sudan: in cities.. and the countryside…” The statement further added, “To the tyrants who believed for a while that victory was theirs, we say, our people will rise up.. to recommence the journey and complete the revolution.”

Later that night, despite the continuing danger of confrontation with the violent militiamen who are deployed across the city, a large crowd of protesters in Khartoum continued demonstrating into the early hours of Monday morning, when the preparations of escalating protest action began.

After successfully carrying out an awareness campaign on Monday and forming new committees at neighborhood levels to coordinate future civil disobedience, the Revolutionary Attendance Notebook was reopened for signatures. By symbolically signing into the notebook, the public and private sector employees from all professions had participated in the civil disobedience which brought Sudan to a halt.

The SPA has also called for demonstrations in all cities, towns and villages of Sudan on Tuesday evening after the “meetings in community centers and open spaces in the neighborhoods to.. mobilize the masses”. These will be followed by demonstrations by professionals, employees, tradesmen, and workers in the national capital and provinces, wearing blue ribbons in condemnation of the sit-in massacres, on June 20.

After the demonstrations, processions are set to be taken out from different neighborhoods of cities and villages across the country to the “conference venues” which have been set up at different provinces. Different neighborhood committees will have meetings at these venues on June 21 to chart the way forward.

There is a huge risk of another shootout over the coming days. The Transitional Military Council (TMC), which was cleared of any wrongdoing by a “military investigation committee” that it had set up, has explicitly refused to withdraw the RSF militia.

Denying responsibility for the massacre, the TMC, whose vice-president General Mohamed Hamdan Daglo heads this militia, maintains that it had only ordered the RSF to clear an adjacent street where “drugs” were being sold, and not to clear the demonstration.

As per this version, the RSF militiamen took it upon themselves to clear the demonstration, and in the “excesses” that followed, 61 were killed. Neither the domestic opposition nor the international bodies have accorded any credibility to this version of the massacre.

While thus admitting that a massacre did occur, the TMC has nevertheless sought to dispute the its scale by denying that over 40 bodies of the killed had been recovered from the Nile into which they were dumped and that dozens of men and women were raped. Both, however, have been well-documented with dozens of footage, hospital records, etc.

The SPA is wary of the risks involved in the demonstrations scheduled over the coming days. “Committees are working to coordinate with medical cadres in every neighborhood and with hospitals near every neighborhood.. in anticipation of any emergency medical situation that may occur to any of our great people in and out of the demonstrations,” it said in a separate statement.

Meanwhile, the TMC, which has been accused by the Democratic Lawyers Alliance (DLA) of crimes against humanity, has moved the attorney general to frame charges against former president Omar al-Bashir. The army was forced to oust Bashir under the pressure of the mass-demonstrations.

Bashir was convicted by the International Criminal Court (ICC) of crimes against humanity, war crimes and genocide 10 years ago, and has two outstanding international arrest warrants against him. The TMC, which had refused to hand him over for a trial by the ICC, has now charged Bashir for “corruption”.

This move by the TMC has done little to distract the resolve of the protesters who are methodically and systematically planning for escalation. In solidarity with them, a number of campaigns are being held across the world between June 20 and 22. These include a demonstration in front of the Sudanese embassy in Tunisia, a protest vigil in front of the United Arab Emirates’ embassy in Los Angeles, condemning the former’s support to the military junta, as well as another solidarity vigil in front of the State City Library in Melbourne.