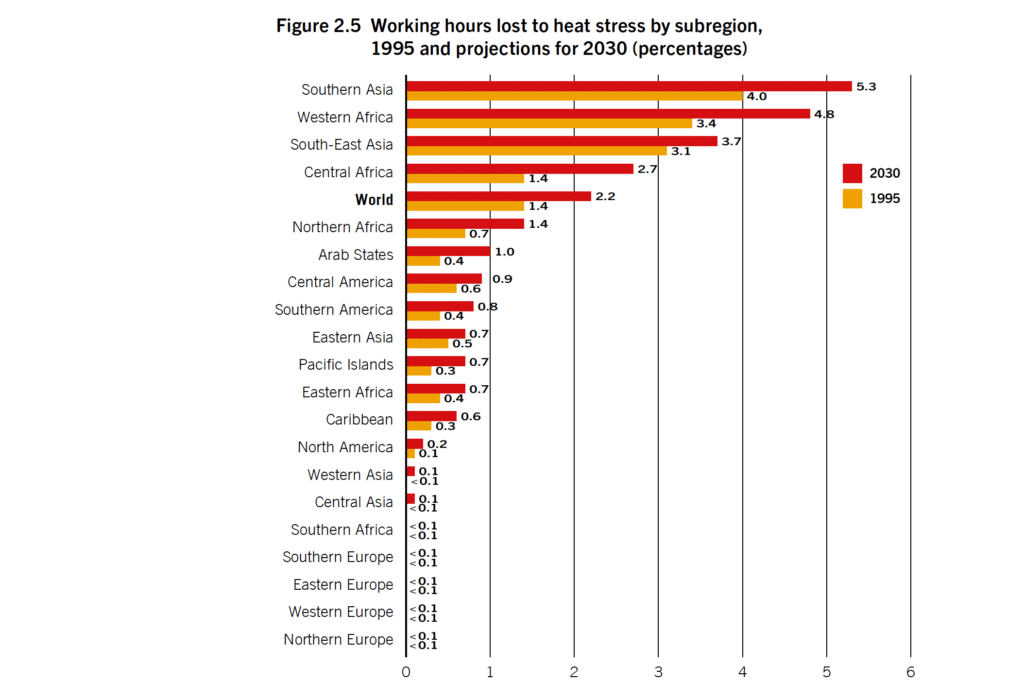 News slips in from here and there in the northern hemisphere of outlandish temperatures. Records have been set; thermometers seem to need recalibration. Relief comes from the drop of a few degrees and from rainfall. But this is momentary. People are aware that the weather is more and more erratic, the heat of the summer much more brutal.

It is true that Europe faced remarkable temperatures in June, but the month before South Asia was hit by a severe heat wave. This is not a freak situation. India’s weather has been measured since the late 18th century. The records improved with the establishment of the Indian Meteorological Department in 1875. The summer has long been an incredibly hot time of the year, the monsoon rains anticipated like manna. Of the 15 hottest years on record, 11 of them have been recorded since 2004. This is a hint of evidence of the climate catastrophe.

Churu (in the state of Rajasthan) was the hottest town at 50.8°C (123.4°F). This is not far from the highest recorded temperatures on earth at Death Valley (California) and Mitribah (Kuwait) of 54.0°C. The government of India recorded an entire month’s worth of days (32) as having experienced heat waves.

In this period, India’s National Disaster Management Authority announced that at least 36 workers had burnt to death. The number is much lower than the 2,081 who died in a 2015 heat wave, although those who follow these calamities note that these numbers are very deflated.

Nine of ten Indian workers are in the informal sector, hundreds of millions of them in construction and agriculture. The most exploited of these workers toil in the hot sunshine, part of the frenzied expansion of India’s cities and part of the crisis-ridden agrarian sector. When these very poor workers die, few pay attention. Their deaths are often recorded not from heat stroke or exhaustion but as merely “unknown causes.”

Working on a Warmer Planet

The International Labor Organization (ILO) has just released a brief—but very important—report on the impact of heat stress on workers. What the ILO finds is that the areas of the world most threatened by heat deaths of workers are Southern Asia and Western Africa. Agricultural and construction workers, the ILO says, are most vulnerable to death by rising temperatures.

If heat rises above 35°C, much less than the temperatures in central and northern India this year, then it “restricts a worker’s physical functions and capabilities” and—if it goes above 39°C—it can lead to “heat exhaustion” and death. What happens is that as temperatures rise, the body cannot endure this excess heat. This is what is known as “heat stress.”

A World Health Organization (WHO) report from 2014 points out that the health impact of the climate catastrophe will be caused by heat, coastal flooding, diarrheal disease, malaria, dengue and undernutrition. If you add all these up, then the WHO predicts excess mortality of at least a quarter of a million people per year. That heat is the first cause is not a surprise.

As a result of rising temperatures, global working hours have been lost—largely in agriculture and construction. According to the ILO calculations, the economic losses due to rising temperatures are going to grow. In 1995, an estimated $280 billion was lost due to heat stress; the ILO estimates that by 2030 that number will rise to $2.4 trillion. Most of these losses would occur in low-income countries. 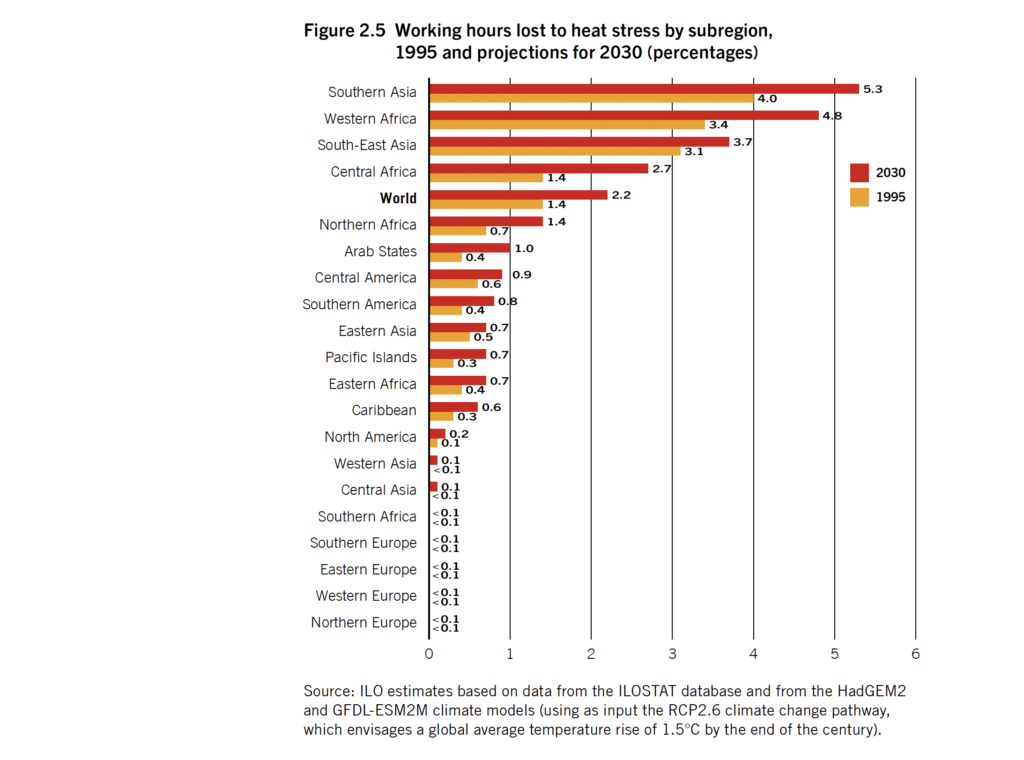 Furthermore, the ILO says that about 80 million people—mostly in agriculture—will lose their jobs as a result of the climate catastrophe. This number is very low. It comes from a calculation that assumes that 40 percent of days are cloudy, not sunny, and that workers can shift their hours from the hottest time of the day to the cooler mornings and evenings. If this assumption is removed, then the job losses can amount to over 136 million.

The ILO has proposed a very mild—even counterproductive—set of reforms. Two of them are increased mechanization and “skills development.” To replace human labor in the hot sun with machines is—of course—humane. But what will this mean for the humans? Will they be compensated in some other way? Besides, in the fields of construction and agriculture, when labor is weak and wage rates are low, there is no incentive for employers to substitute humans with machines.

To increase skills would mean to improve worker productivity. What we have seen in the past 40 years is that little increase in productivity has gone to workers; the bulk of it goes to the bosses.

Both mechanization and skill development merely provide fewer jobs for workers, even as these techniques might save their lives.

The ILO warns that heat stress prompts agricultural workers to flee the countryside for cities, and to flee the hot zones of the planet for more temperate climates. In other words, migration will rise as a consequence of the climate catastrophe.

The Indian state of Kerala (population 35 million)is governed by the Left Democratic Front, a political alliance of communists and left-wing political parties. As the heat wave developed in India, the left-wing government announced a mandatory embargo on work in the hottest part of the day (11 a.m. to 3 p.m.).

The Labor Department of Kerala warned that if employers did not comply with this order, then they would be prosecuted. This decision was prompted when construction workers came to hospitals in Kerala with sunburn. Labor inspectors and police officers visited construction sites during the worst of the heat to ensure that workers were not being forced to work during the peak heat hours.

These are commonsense measures. Yet, they require the strong arm of the law and of regulation. In India, like in much of the world, workers are increasingly in the informal sector. Here, laws are often discounted, regulation absent.

Unions are the most effective way by which workers exercise power, and yet there are fewer workers in unions now. The left is weak, and Kerala is an exception. Elsewhere, the whips of management strike across the backs of vulnerable informal sector workers, who are burnt in the hot sun to bring profit to their employers.

Obduracy in many Western capitals regarding the climate catastrophe simply means it will continue. As temperatures rise, it is the most vulnerable people who will be burnt in the fields and at building sites. They will flee and then be treated as criminals. Their choices are limited: to die under the blistering sun or to die on the road.