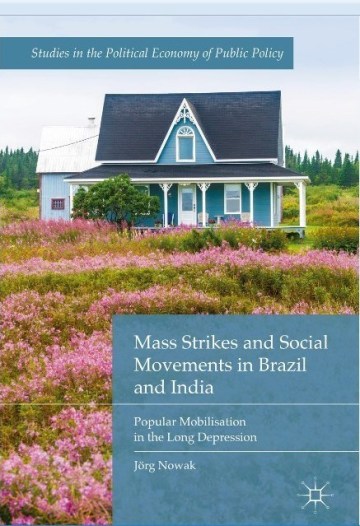 Links International Journal of Socialist Renewal reposted from Progress in Political Economy — The idea of mass strikes within the Marxist tradition has been most powerful against capitalism. With the idea of strikes, Marx wants to bring about an epistemological change in the working class, “so they would know that they are, together, ‘the agent of production’, and that if they stopped, then production stopped.” Different models of mass strikes have been practised and reterritorialised worldwide from its origins in Western Europe. There has been debate on how the working class today responds to the current changes of capitalist development.

The recent publication of Mass Strikes and Social Movements in Brazil and India: Popular Mobilisation in the Long Depression by Jörg Nowak persuasively challenges the prevailing Eurocentric approach to labour conflicts. Nowak highlights the need to engage in a wider perspective that includes non-class relations and social relations beyond the workplace into a theory of strikes. Labour conflicts need to involve non-workplaces organising, neighbourhood mobilisation, and the significance of local collective repertoires.

Nowak mainly reveals that many labour conflicts occurred without the help from labour unions, but with the support of social movements, local communities, and different types of associations. Thus, he proposes a theoretical analysis on strikes beyond a focus on the workplace and the trade union, and offers an analysis on various forms of organisation and places of mobilisation. It is necessary to search for a new political alternative model of working-class organising. In other words, we need a new theory of strikes.

In fact, such a notion is not a new. It has been discussed and realised among labour activists in the past decades, such as the strategy of community-based organising, among others. Despite the difficulties and challenges in implementing the idea, a wider labour organising strategy than beyond workplaces is extensively explored, at least in Asia. To mention a few, examples are the recent stories from Indonesia as well as different organising initiatives in different countries in Asia.

In a broader analysis, Chang has critically assessed the role of the labour movement against the movement of capital in Asia, the ‘continent of labour’, calling for labour and its organisations to play a central role, not because they are the ‘exclusive vehicle’, but because it is the alpha and the omega of the movement of capital. Labour is not a sectoral issue or part of a social issue related to the movement of capital, but it is everything about the raison d’état of capital. In other words, we have to deal with mobile capital, which does not only mean the geographical movement of money, but it also involves the changing social relations through which a particular sort of social labour is imposed. Therefore, as capital intrudes into society, the inclusion of various parts of social struggle into a definition of the working class is indispensable.

In this sense, rather than defining the social movements, communities, and different types of groups that are involved in the mass strikes as non-classes, as Nowak highlights from his fieldwork, I would argue that they should be considered as alliances as well as part of class struggle. They are part of working people continuously reproduced by social, political and economic processes of capitalism. Class definition should therefore be inclusive to embrace different parts of society that are “coerced commodification of their labour power”.

Certainly, Nowak’s new theory of strikes enriches the long debates on the future of the labour movement, as it provides detail evidences from the field as well as a thorough analysis of the secondary literature on mass strikes.

I think it is timely to reflect on a new direction for the labour movement that recognises society, no longer solely within factories, as a place where organising can challenge capital, not because the community is where factory workers are living, but because the increasing mobility of capital clearly integrates all sections of society into its logic of accumulation and extraction of abstract labour. This would mean that organising works at the community level indicating a broader approach to ‘labour’ as well as an inclusive definition of the working class, which will deal with the divided interests between productive and non-productive labour, formal and informal workers, waged and unwaged labour, factory and home-based workers, unpaid and self-employed workers, free and semi-free labour, and so on. These are all the working classes, the proletarian collective, the subaltern and revolutionary subject, labouring in urban, rural, industrial, farms, and many other locations, by whom mobilisation and mass strikes might be allowed to happen.